Shaun the Sheep: Season One 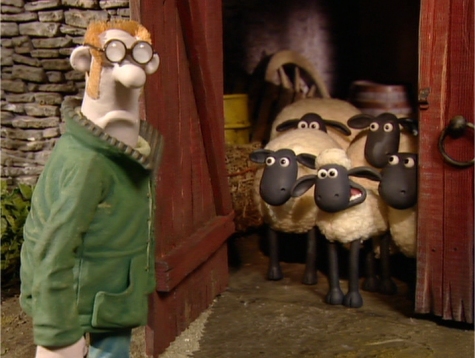 Originally making his first appearance in Aardman Animation's Wallace and Gromit: A Close Shave (1995), the inquisitive and clever Shaun the Sheep has become one of the company's most popular supporting characters. Unfortunately, Shaun didn't make an appearance in the duo's first feature-length adventure---but Aardman hadn't forgotten fans of the woolly hero. Later that year, a television series featuring Shaun hit the British airwaves, with Region 1 eventually catching up a short time after. Produced in the company's trademark style of expert stop-motion animation, the aptly-named Shaun the Sheep reminds first-time viewers of classic Wile E. Coyote and Tom and Jerry cartoons: it's wordless in a technical sense, utilizing clever sight gags and music to tell each seven-minute story.

Away from the bustling atmosphere and invention-fueled excitement of Wallace and Gromit, Shaun's world is a non-descript farm with green pastures and wooden fences. Along with a flock of considerably less clever and athletically-inclined sheep, a strict but lazy guard dog ("Bitzer"), a somewhat witless farmer and a trio of mischievous pigs, Shaun tends to make the most of each day. Whether leading the flock in morning exercises, organizing a game of soccer, wrestling with the pigs or simply munching on grass (when the farmer's around, of course), our hero's bravery is sometimes outmatched by his own clumsiness---but more often than not, Shaun saves the day. Although this series is clearly aimed at younger audiences, it's perfectly acceptable fare for those who enjoyed Wallace and Gromit, Creature Comforts...or, let's face it, pretty much the entire Aardman back catalogue.

Series 1 (or Season 1, in American TV terminology) of Shaun the Sheep originally aired from March through September 2007, with each of its twenty "episodes" made up of two seven-minute shorts. As each of these shorts is self-contained and includes its own set of opening and closing credits, the traditional "episode format" has been done away with for all subsequent DVD releases. As expected, each of these wordless seven-minute shorts is packed with clever details---and with such a strict timeframe, the adventures of Shaun and company rarely overstay their welcome. This Region 1 release of Shaun the Sheep: Season One includes all 40 original shorts, presented in what appears to be a completely random order: 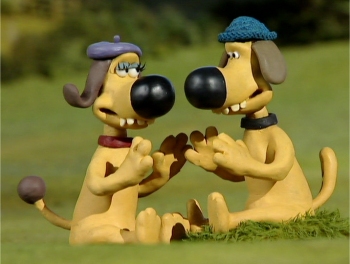 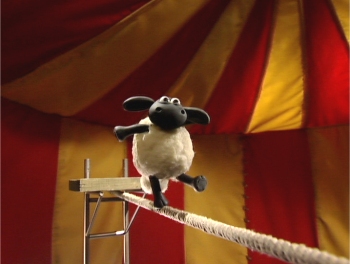 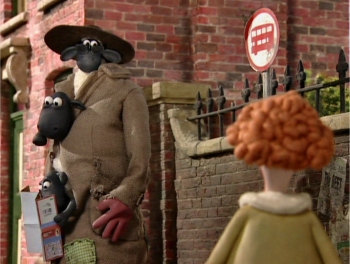 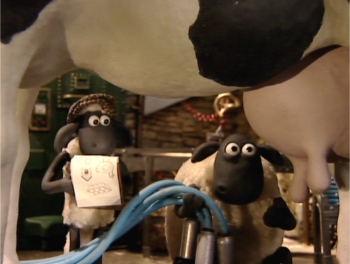 From top to bottom, there are plenty of top-notch shorts packed in here, especially among the 30 (!) presented on Disc 1. Series premiere "Off the Baa!" served as the introduction to Shaun the Sheep for most viewers (including yours truly), as this soccer-infused adventure does a good job of keeping things entertaining and light from start to finish. Other highlights include "The Bull" (a nearby bull goes after all things red...including the sheep, once the Naughty Pigs have some fun with red paint), "Saturday Night Shaun" (Shaun grabs the farmer's old record player for a party at the barn), "Fleeced" (the flock escapes the confines of the farm for a day out), "Shaun Shoots the Sheep" (with an instant camera, don't worry), "Fetching" (Bitzer falls for a cute pup while playing Frisbee), "Bitzer Puts His Foot In It" (fun with newly-poured concrete), "Sheepwalking" (Shaun wanders in his sleep, so the flock follow him out of habit), "Save the Tree" (Shaun and company attempt to save their favorite tree when the farmer's out looking for firewood) and many, many more. There literally isn't a bad one in the bunch...and though I've yet to see any of Season 2 (which began in November of last year), it's doubtful that fans will see a drop in quality. From a purely content-based perspective, Shaun the Sheep: Season One is a winner.

But I'll be honest: I already own Shaun the Sheep's first season on DVD, having imported a Region 2 copy from the UK nearly two years ago. Months before my purchase, Lionsgate began to release individual volumes of Shaun's first season domestically (and cropped to 1.33:1, much to the dismay of everyone who wasn't six years old). These one-disc hack jobs typically included 8-10 episodes apiece and were priced at $15; hardly a bargain, considering the total content was less than an hour long.

Fast forward to yesterday: Lionsgate finally released Shaun the Sheep: The Complete First Season domestically...and at less than $30 for all 40 shorts, it's a much better value than the stand-alone releases. Heck, it's even got the opening and closing credits for each episode this time around. But that's where the good news ends: Lionsgate has retained the 1.33:1 transfers from the stand-alone releases, which effectively kills a hearty recommendation right out of the gate. Most potential buyers should stop here...but just in the interest of fairness, let's take a closer look at what's included on this two-disc set:

Presented in cropped 1.33:1 aspect ratios, the pan-and-scan presentation isn't the only problem with these shorts. As mentioned earlier, Region 2 Shaun the Sheep DVDs maintain the series' original 1.78:1 aspect ratio---but since this release is aimed at the kids, I guess Lionsgate didn't bother with quality control. The color palette doesn't exactly pop off the screen, while modest amounts of edge enhancement and interlacing can be spotted along the way. If Lionsgate had taken the extra step of presenting these episodes in widescreen, this belated release would still be a no-brainer...but they didn't, so it's not.

If I seem a bit overly annoyed with the pan-and-scan visual presentation, consider this: not only has Lionsgate continued to crop Aardman releases (including last year's excellent Wallace and Gromit: A Matter of Loaf and Death), but even this disc's previews are presented in anamorphic widescreen. That doubles as a slap in the face and a thoroughly confusing business decision.

The Dolby Digital 2.0 Surround mix fares slightly better, featuring good channel separation and clear "dialogue". Inquisitive bleats fill the soundstage on more than one occasion. Shaun's playful music also comes through loud and clear, rarely fighting for attention and typically anchored squarely up front. Surprisingly, optional English subtitles are available during all 40 of these shorts, but they're presented in a hard-to-read green and white "Comic Sans"-style font. I'll give Lionsgate a few points for trying, but these are technically captions (not subtitles) and often seem more distracting than helpful. 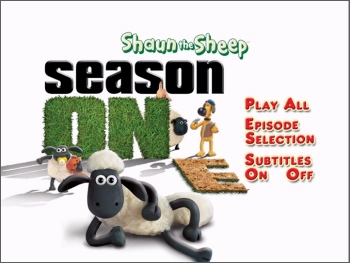 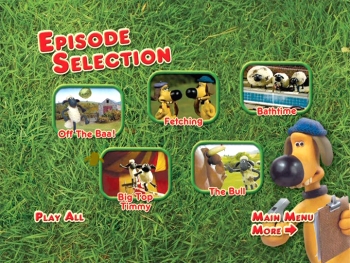 Seen above, these plain-wrap menus include episode selection and a handy "Play All" option. Each 7-minute episode has been presented with three chapter stops, while no obvious layer changes were detected during playback. This two-disc release is housed in a space wasting double-width keepcase...and oddly enough, the discs are stacked on an overlapping hub (like Paramount's Star Trek deluxe movie releases). A matching slipcover is included in lieu of any inserts. Unfortunately, episode titles have not been printed anywhere on the packaging, so feel free to use the guide above for quick reference.

Bonus Features
Surprisingly, all of the bonus features from the Region 2 release have been ported over, just as they were (partially) in the individual Region 1 volumes. These include a pair of simple menu-based Games ("Whack-A-Pig" & "Sheep Shearing"), a short "Sing-Along with Shaun" video (essentially, the opening song with lyrics at the bottom) and a trio of short behind-the-scenes featurettes. These little tidbits include "Meet the Animals" (a brief tour of the art department with a group of young Shaun fans), "Building a Pig" (more Shaun fans get a hands-on sculpting lesson) and "The Mini Making-of Shaun" (a more general behind-the-scenes tour). New here is a very brief Bonus Clip from Timmy Time, an Aardman production starring everyone's favorite lamb. It's obviously aimed at the younger crowd, but this short 0:47 music clip may burrow itself into the brains of all audiences.

Not a bad little batch of extras, though it's worth noting that they were originally created for the 2008 Region 2 release...it would've been nice to see some new material here. All bonus features are presented in a curious mix of 1.33:1, non-anamorphic and enhanced widescreen formats. As mentioned earlier, Closed Captions are not supported during any of these extras.

There's no doubt that Shaun the Sheep continues Aardman's tradition of flawless stop-motion animation, cracking comedy and clever sight gags. This two-disc set herds together all 40 shorts from Season 1...and with all of the existing bonus features accounted for, this belated package from Lionsgate seems like a genuine step in the right direction. Unfortunately, the visual presentation doesn't correct a major flaw of the studio's earlier Shaun collections: the widescreen picture has been cropped to 1.33:1, which basically kills this one right out of the gate. Rent It.