Doctor Who: The Dominators

It's always good to get more stories from the second Doctor.  With only 6 of the 21 serials that Patrick Troughton made during his run on Doctor Who surviving in complete form, these adventures are fairly rare, and what's more Troughton did a great job.  The latest release from the BBC, The Dominators, isn't the best installment of Doctor Who, but its strengths more than make up for the story's weaknesses and when all is said and done it's a wonderful romp. 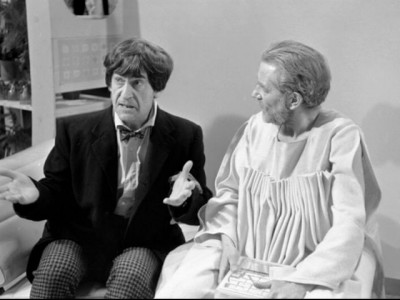 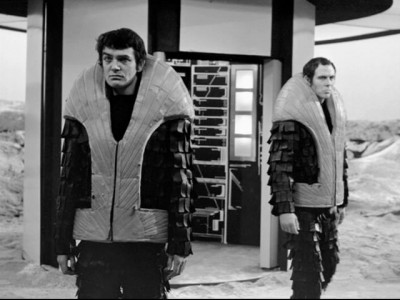 Landing on the planet Dulkis for a relaxing break, The Doctor, Jamie, and Zoe have no idea that they've landed on an abandoned island, and that the Dominators, the rulers of 10 galaxies, have just arrived too.  The Dominators are a warrior race that only exists to conquer and they're in need of fuel for their space fleet.  A single Dominator ship arrives to survey the planet and make it ready for the fleet, but that's all that is needed.  With a group of Quarks, small but powerful robots, they start surveying the area and prepare to drill five bore holes that will allow them to make the planet ready to feed the Dominator fleet.

The only people on the uninhabited island are a professor and his two students who are studying the land and Cully, a man who has become fed up with the Dulcians lack of imagination and sense of adventure.  It turns out that the people of Dulkis are all pacifists, and when their aggression died out so did they will to do anything but talk and endlessly debate minutia.  Even when Cully discovers that the Dominators have landed and that they intend to rape the planet, the leaders don't seem to care. 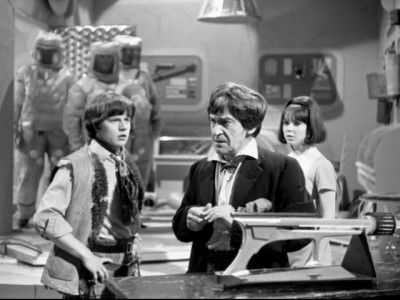 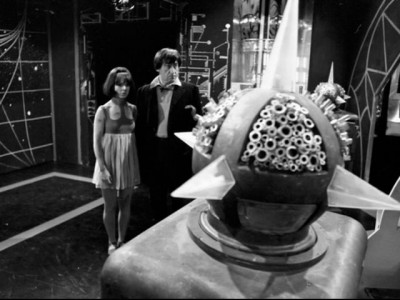 The Doctor is intrigued by these alien visitors however, and is curious about what they're looking for.  The planet has no minerals or alloys of value, what could they be after?  When Zoe gets captured and forced to work clearing a drill site along with some of the other Dulcians, it's up to Jamie, Cully, and a distracted Doctor to rescue her and save the docile Dulkians from a terrible fate.

There's a lot I enjoyed about this serial, but it has its share of problems too.  The writers, Mervyn Haisman and Henry Lincoln, envisioned this story as a critique of the hippy movement, illustrating the horrors of planetary peace.  The result, especially in the first three episodes, is a lot of exposition with people talking about peace or the lack of curiosity on Dulkis.  These scenes really bring the action to a halt and make the story drag.

The story editor realized that the script had a lot of problems and sent it back for numerous rewrites.  The writers baulked at cutting too much of their grand idea and eventually took their names off of the production.  The original six-part story was shortened to five episodes (which accounts for the rather abrupt ending) and the latter scripts were rewritten without the original authors input.  It's curious that these are the best episodes in the adventure. 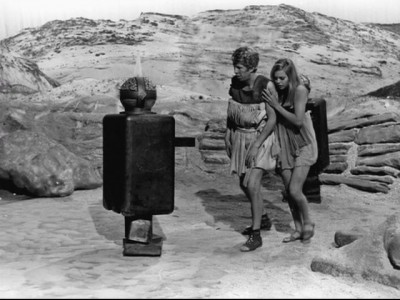 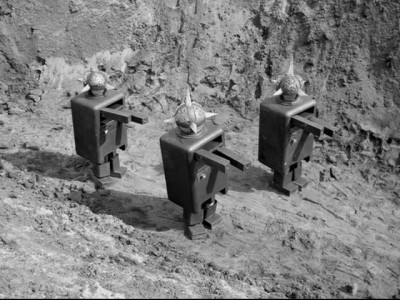 The Quarks, the Dominators diminutive robots, were created for the sole purpose of coming up with a replacement for the Daleks.  Terry Nation, the Dalek's creator and the person who owned the rights to them, was trying to get a Dalek series started on TV in the and wouldn't let the BBC use his creatures, so the scramble was on to find a replacement.  There are some things about the Quarks that work quite well, the voice in particular, a high-pitched little girl's screech, created an interesting contrast to the fact that the creatures were deadly.  The design was pretty poor though.  Short squat boxes on minuscule legs, the machines could barely walk, much less move at a good pace, and their arms which protruded from their front at different levels seemed silly.  The Quarks failed to inspire fear or even mild concern.

Aside from the talky beginning and the rather non-menacing menace, this adventure has a lot going for it.  Troughton is excellent, as usual, coming across as scatterbrained and a bit incompetent, though ultimately in control and brilliant.  Zoe is a nice addition to the group, having first appeared in the previous serial, and her calm collected personality is a nice counterpart to Troughton's Doctor.  Frazer Hines plays Jamie, the tough and pragmatic Highlander, to perfection.  His character really brings the story together and makes the show.  When he and Cully are out harassing the Quarks and Dominators he's in his element, leaping from behind a bolder to do some damage then scampering away before he can be caught.  He loves the thrill and his attitude is infectious.

This disc has some great extras included, as is the standard for Doctor Who releases.  There is a commentary track for all of the episodes with Fraser Hines (Jamie) and Wendy Padbury (Zoe), along with fellow actors Giles Block (Teel) and Arthur Cox (Cully), along with make-up artist Sylvia James and moderator Toby Hadoke.  It's a very nice track, with Hines and Padbury's comments being especially interesting.  They obviously have fond memories of their time with the show and reveal some interesting anecdotes.

Other featurettes include Recharge and Equalise (23 minutes) a look behind the scenes at the troubled production of the serial, and Tomorrow's Times--The Second Doctor (13 minutes), a very interesting piece (not to mention being a very clever idea) that presents published news pieces and reviews of the show from back when the series originally aired.  This time Caroline John (Liz Shaw) presents a look back at Troughton's press.

In addition there is a pop-up informational text option which is very informative as always.   It does give some dry statistics, like how many people viewed each episode, but there are also some interesting notes such as script changes that were made and background information on the supporting characters.  The extras are rounded off with, a couple of photo galleries, and the listings from the Radio Times in .pdf format.

When all is said and done, this is a good adventure.  Not the best, but still very enjoyable in large part due to Patrick Troughton and Frazer Hines strong performances.  Yeah, it's a bit talky and yes the Quarks aren't as imposing as they could be, but the last half makes up for these defects.  Recommended.