The Criterion Collection // Unrated // January 18, 2011
List Price: $39.95 [Buy now and save at Amazon]
Review by Stuart Galbraith IV | posted January 30, 2011 | E-mail the Author
Part of the appeal of genre films - horror movies, B-Westerns, musicals, noir - is their familiarity, their function as the cinematic equivalent of junk food. You pay your money and get exactly what you expect. Nearly all of writer-director Samuel Fuller's genre films tell familiar well-worn "yarns" (as Fuller liked to call them) but in highly unusual ways, subverting genre expectations to the point where the audience barely knows what to make of what's up onscreen.

Such is the case with The Naked Kiss (1964) a torrid, small-town melodrama that's like a missing link between Douglas Sirk's over-the-top women's films and Russ Meyer's and John Waters's later satires of small town Americana. Cheaply made for release through Allied Artists, The Naked Kiss probably cost less than $200,000, and it's staffed with (mostly) talented but low-rent actors, artisans and technicians fresh off other cheap movies. For instance, cinematographer Stanley Cortez's schizophrenic career included The Magnificent Ambersons and Night of the Hunter but also The Angry Red Planet and, around this time, the movie that eventually became They Saved Hitler's Brain. Art director Eugène Lourié had worked with Jean Renoir, Max Ophüls, and René Clair, but for a time became known as the go-to director of cheap giant monster movies (The Beast from 20,000 Fathoms, The Giant Behemoth, and Gorgo). Fuller himself traded bigger budgets and better security at 20th Century-Fox for greater independence if lower budgets and tighter schedules through Allied Artists.

If fans are attracted to genre films for their comforting predictability, the main draw of The Naked Kiss is its unusualness. It's like a hundred other movies yet decidedly off-kilter in every scene, unlike anything made before or since. And like several other Fuller movies, watching it for the first time is a strange, beguiling experience - more than one critic has compared this to a fever dream.

A longtime Criterion title first released on laserdisc in 1990 and again on DVD in August 1998, this new edition of The Naked Kiss is crammed with intriguing extra features. The film seems to have lapsed into public domain; about a dozen PD labels have sold it in-between Criterion's various editions, but this release is absolutely pristine. Virtually all non-'scope Allied Artists titles were 1.85:1 from 1954 on, but for some reason Criterion chose to release this at 1.75:1; because of this, the top-edge of the set is visible in at least one shot, as is director Fuller himself. 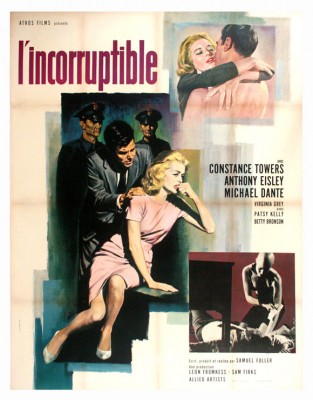 To say the least, the movie opens with a bang. Prostitute Kelly (Constance Towers) beats her pimp (Monte Mansfield) to a pulp, in some shots madly swinging her handbag directly at the camera lens. (It's here where Fuller is briefly visible.) During the brawl the pimp pulls off Kelly's wig - she's as bald as a cueball. (Fuller later claimed Towers gamely shaved her head but in fact she's wearing a bald cap.) Kelly takes money owed her, and with a kind of flourish fixes her wig in the mirror (again looking straight into the camera lens) under the opening titles.

Two years later Kelly, her blond hair having grown back, arrives in the sleepy town of Grantville, plying her trade under the guise of a traveling saleslady selling cheap champagne. She flirts and quickly beds down with Griff (Anthony Eisley), the town sheriff, he looking for a cheap lay while for professional reasons she aims to get on the cop's good side.

However, the next day hypocrite Griff is ready to run her out of town on a rail, more specifically across the river and state lines to Madame Candy's (Virginia Grey) joint, a bonbon-themed hooker bar staffed by girls with corny nicknames (Edy Williams plays one called "Hatrack"; she later married Russ Meyer).

Instead, Kelly has an epiphany while looking into the mirror - mirrors play a big role in The Naked Kiss. When she looks at a room to rent and asks about references, the landlady points to Kelly's reflection in one, saying, "Your reference is that face!" (In Kelly's room is a dresser's dummy wearing the uniform of the landlady's dead husband, which includes an insignia for The Big Red One, the subject of Fuller's 1979 masterpiece.) She decides to start anew, becoming a highly regarded nurse's assistant for crippled children at a local hospital's juvenile orthopedic ward. She falls in love with J.L. Grant (Michael Dante), "international playboy ...[and] society's most eligible bachelor" and a descendent of Grantville's founder, who woos her with home movies of a trip to Venice and a mutual love of poetry. ("Love of poetry," he says admiringly, "Rare in this age of missiles.") But J.L.'s dark secret and Griff's determination to expose and humiliate Kelly after she refuses to leave town threatens their happiness.

After that wild, unforgettable opening, The Naked Kiss in its early scenes play almost like a spoof of women's melodramas. Towers's performance is amusingly over-the-top here, self-consciously sweet toward crying babies, outrageously flirtatious around Grantville's horny men. The dialogue is ripe: Griff says Kelly is "enough to make a bulldog bust his chain," and they flirt with one another and negotiate Kelly's price in a hilarious exchange of double-entendres involving corks, bottles, and the price and quality of champagne. The film is ripe with hipster chat; at one point Candy asks Griff, "How 'bout snorting the Elvis?" I don't even know what that means.

However, once Kelly goes to work at the hospital, in her interaction with the children, most presumably polio victims, these scenes are almost painfully sincere, including even a dream sequence where they play merrily without the aid of crutches and braces. This was, after all, a time when "cancer," then by all odds a death sentence, was spoken in hushed tones and crippled children in heavy metal leg braces were viewed as pathetic, tragic cases to be pitied. These scenes are really just an excuse to show Kelly's life in turnaround; she can't have children herself but her gentle tough love to get these kids motivated and on their feet inspires the hospital staff (including comedic actress Patsy Kelly). The film then veers in another direction altogether, as J.L.'s dark side is revealed and Kelly unjustly winds up in jail, where Griff's hypocrisy and unbelievably thick skull become more than a bit annoying.

The Naked Kiss is, to say the least, a film with chutzpah, and this overcomes a few shortcomings like Anthony Eisley's stiff performance as Griff, or distractions like the incredibly barren backlot where much of The Naked Kiss was apparently filmed. It looks like the budget was too low to populate central Grantville with extras or trashcans or signage, giving the town a utilitarian, if not outright unreal look.

The picture makes an interesting contrast to Sirk's earlier melodramas; Fuller's cigar chomping, Front Page-type approach - extremely stylized yet unflinchingly frank and taboo-busting - is most apparent in Kelly's literal whore-turned-saint. It's a weirdly masculine women's film but in 1964 was undeniably forthright and ahead-of-its time both in terms of its relative explicitness and its unconventional wisdom about cops and hookers.

Filmed for 1.85:1 projection, The Naked Kiss is presented in 1.75:1 format, which is close enough, I guess, though I wonder why this particular aspect ratio was chosen. The film looks crisp and sharp with no obvious damage or age-related wear, and derived from a 35mm fine grain master positive. The uncompressed mono audio (English only) is fine; it's supported by SDH English subtitles, and the disc is Region "A" encoded.

Supplements include a warm, extended interview with actress Constance Towers (also the wife of actor John Gavin), in a 2007 interview. Samuel Fuller is himself interviewed at three different points in his life: in a 1967 French television interview; on a 1983 episode of Britain's The South Bank Show, shot in 16mm film at his Hollywood home; and again for French TV, in 1987. Fuller tells many of the same colorful - and perhaps apocryphal - stories about his life and career. A trailer for the film is, like the movie, presented in a curious aspect ratio, despite being in 1080p: 1.37:1 pillarboxed.

Also included is a colorful booklet designed by cartoonist Daniel Clowes, whose work also graces the cover art and menu screens. Useful excerpts from Fuller's autobiography, A Third Face: My Tale of Writing, Fighting, and Filmmaking, discusses the origins of The Naked Kiss, while critic and poet Robert Polito contributes an interesting if somewhat overwritten analysis.

The Naked Kiss is firmly entrenched in the world of "B" moviemaking, but in that league there are few peers and the film so throttles the conventions of its genre that, like most of Fuller's films, it's a must-see. A DVD Talk Collector Series title.