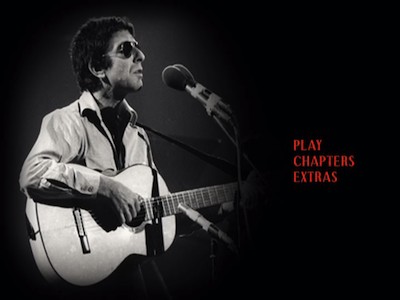 Leonard Cohen's Lonesome Heroes is an academically minded documentary that seeks to root out the main inspirations the famed troubadour brought together to make his signature style. A poetic lyricist known for his gravelly delivery and often dour subject matter, Cohen is an incomparable talent, singular in his point of view, a man whose art is his struggle to understand the modern human condition. Lonesome Heroes gathers a group of scholars, critics, and admirers--among them singer Judy Collins and Cohen's mentor in Zen Buddhism, a monk named Kigen--to try to deconstruct all of that and understand Cohen's message by uncovering what fuels it.

The movie is broken down into specific topics, with a heavy focus given to Cohen's formative years as a student and his career as a poet and novelist prior to his finally picking up a guitar and singing his songs. The Canadian performer joined his home country's literary scene at a time when it was emerging as its own thing, and as part of that, Cohen brought on board the linguistic innovations of Spanish poet Federico García Lorca and the American Beat movement. In terms of music, Cohen took bits and pieces from traditional country and western, guys like Tex Ritter and Hank Williams, and the folk music scene, both the 1950s down-home period typified by Pete Seeger and the later Bob Dylan revolution. In terms of folk, some time is also spent talking with Judy Collins about how she came to record Cohen's songs before he had ever performed, and how the two had an effect on one another. Additionally, there are sections about Cohen's connection to Jacques Brel and the French chanson tradition, and also the performer's love of Ray Charles.

In the cottage industry of unauthorized music documentaries, there are a lot of hustles--films that are so far removed from their source material that they barely register as something even die-hard fans would find interest in. Leonard Cohen's Lonesome Heroes is not one of these. Though there is not a lot of Cohen's music here, there is enough, particularly specific songs when they are called for--such as "Who By Fire," which has a strong connection to the singer's Jewish roots; it is trotted out as an example of those roots and illustrates how Leonard can alter a traditional verse to suit his needs. Better yet, when different musical artists like Dylan or Williams are brought up, we get to hear their music, as well. Same with the poets. There are readings of Lorca and Kerouac, and even Cohen reading from himself.

Too often these DVDs are bargain basement affairs, and the closest we get to the music of the artists being dissected are some session posers aping their style. It makes the programs about as meaningful as, well, a documentary about a filmmaker with no clips of his movies. Or a book about a painter with no pictures of the paintings. Even for fans, those kinds of discs can be a strain. That said, Leonard Cohen's Lonesome Heroes doesn't really transcend being a fans-only affair. As interesting as much of the talk is, this is not a story about a boy and his guitar, it's a dry analysis of what that boy did with the guitar. It's a little long and sometimes dull even if you know Cohen's tunes, I can't imagine what it's like if you've never dabbled. Apply your interest accordingly.

Video:
Leonard Cohen's Lonesome Heroes is a low-grade video production with a fairly average DVD presentation. The full frame picture is decent for what it is. There is some interlacing, and the overall look of the film is drab, but the contrast is kept dark so as not to blow it out or make it appear overexposed.

Sound:
A no-frills stereo mix is all that is really required here, as even the music recordings are pretty old (mostly TV appearances) and the emphasis is on the commentators. The tones are flat, but warm and lacking any distortion.

Extras:
The bonus section features an extra seven minutes with Judy Collins, expanding on her friendship with Cohen and her attraction to his music. She also touches on his recent live renaissance.

There are also text-based bios of all the commentators.

FINAL THOUGHTS:
Though Leonard Cohen's Lonesome Heroes is definitely recommended for fans interested in hearing smart folks talk about the singer and his songs, I'd still say this disc is a Rent It simply because I can't imagine watching it more than once. The information is pretty good and the analysis intriguing, but it's not going to require repeated study, nor does the style of the documentary lend itself to multiple viewings. If you like Leonard Cohen, I think you'll like watching it the first time, though, and so if it crosses your path, give it a try.