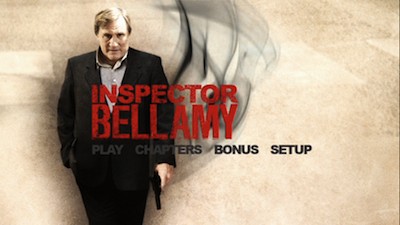 When famed filmmaker Claude Chabrol, who was often referred to as the French Alfred Hitchcock, died last September at the age of 80, he left behind one last film. Inspector Bellamy was a starring vehicle for Gerard Depardieu, a police detective with a large reputation and an uncanny nose for the truth. It is a film that is grounded and accomplished, but one that is also in flux, an ode to a veteran skilled in his art and yet also maddeningly suggestive of work yet to come.

The famed Inspector Paul Bellamy is spending time away from Paris, staying in the home where his eternally patient spouse Françoise (Marie Bunel, The Girl Cut in Two) grew up. They are there on the down low, avoiding the local police who might want to pick Bellamy's brain and also those who might want to trade on his fame. Apparently everyone has read his memoir, including the strange man who lurks in their bushes, trying to screw up the courage to talk to the cop. He introduces himself as Noël Gentil, and he wants Bellamy to help him see his way clear of a crime that involves insurance fraud and murder. Gentil is connected to Emile Leullet, an insurance adjuster who is believed to be in hiding after killing Denis Leprince, a homeless man that was Leullet's patsy for faking his own death. The identities of all three men are tied together; so much so, they are played by the same actor, Jacques Gamblin (Henri-Georges Clouzot's Inferno). Leullet left a mistress (Vahina Giocante) and a wife (Marie Matheron), and knowing that, his motives for trying to collect the insurance money are pretty obvious.

As all of this is happening, Bellamy is also visited by his younger half-brother, Jacques (Clovis Cornillac, Paris 36). Jacques is a criminal and a boozer, and he and Bellamy are constantly bickering. They make up briefly over drinks, with the Inspector having to be coaxed into taking his shots. He has recently given up drinking and there are hints that maybe he has problems with alcohol. It is one of many things that is implied about Bellamy's past, suggesting that Chabrol and co-writer Odile Barski have a detailed history to draw from for this character. There are obviously famous mysteries in his distinguished career, as well as a pattern of infidelity, and Bellamy's longsuffering wife acts as the sounding board for the former and turns a deaf ear to the latter. She's a fascinating character, the sort of caretaker that famous detectives rely on. Bunel plays Françoise with a lot of smarts and also some sexiness. It's no surprise her husband can't keep his hands off her. She's got an irresistible brain.

I'm forced to admit, while watching Inspector Bellamy, I was under the impression that he was a famous character from a long-running series of detective novels, someone like Hercule Poirot or Inspector Morse. The cover of the DVD even boasts that it pays tribute to the fiction of Georges Simenon, but it turns out that the Belgian author is known for a detective named Maigret, not one named Bellamy. With this misconception in mind, I excused the movie's failure to explain more about the character by blaming my own lack of knowledge. Surely most people knew the history of Paul Bellamy and didn't need to play catch up. I just went with it.

The way Chabrol tells the story also added to my mistaken belief. Inspector Bellamy doesn't play like a complete movie. Rather, it comes off like part of a series, an adaptation of a later book in a string of many, or maybe even a pilot for a new PBS Mystery serial. It doesn't have much of a driving mystery, it's not a whodunit, and though there are parallels to be drawn between the relationship of Bellamy and his brother and some of the facets of the insurance fraud, they don't converge in any meaningful way. Entering Inspector Bellamy, we enter a life in progress, and when we exit, that life is still going.

The fact that this isn't part of a greater whole makes the nagging lack of satisfaction all the more pronounced. What exactly was Chabrol trying to convey with this? The plot is amiably paced and fails to conjure any palpable suspense. The whole movie merely comes and goes and that's that. Carry on as you were.

It's all too bad. I'd keep watching if there were more. Gerard Depardieu is fantastic as the tired older detective. He effortlessly inhabits the role, playing it with intelligence, using his considerable girth as an effective counterbalance to the inspector's keen mind. He also has a tremendous rapport with Marie Bunel. If Chabrol was successful at anything here, it was in portraying a couple in a mature and lasting marriage, warts and all. Other than that, though, Inspector Bellamy lacks the suitable punctuation befitting a man's final cinematic work. Unless Claude Chabrol intended to end his career as a question mark.

That, I guess, is a mystery all unto itself. 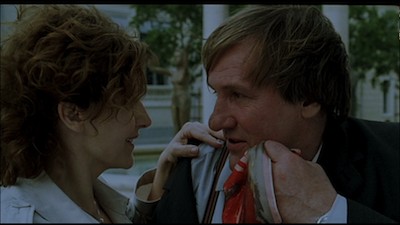 Video:
The widescreen anamorphic transfer (1.85:1) on Inspector Bellamy looks good. It has a chilled, natural color palette, rendered faithfully on disc. The image has a slight softness to it, but it's lacking in jagged edges or pixilation. It's above average, but falls short of perfection.

Sound:
The original French soundtrack is mixed in 5.1 surround and fills all the speakers, with a tendency to push heavily to the front. There aren't many effects, it's a largely straightforward soundscape.

The optional English subtitles are easy to read, written clearly and paced evenly. There is a second English option for the deaf and hearing impaired, as well as Spanish subtitles. 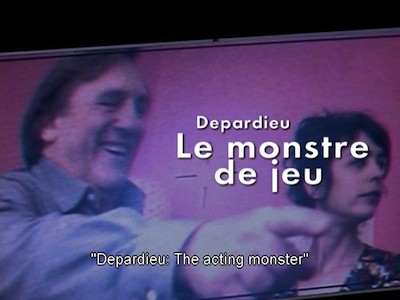 Extras:
Extras include the theatrical trailer for Inspector Bellamy and what is billed as a behind-the-scenes featurette. In actuality, it's an hour-long documentary called Depardieu: The Acting Monster, made by Pierre-Henri Gibert and shot at the time of Inspector Bellamy. So, it is a making-of and it isn't. It is exclusively on the set of this movie, we do see Depardieu and Chabrol at work, and there are interviews with other cast members, but for a lot of it, the documentary is focused on the actor. Eventually there is a shift, and at the halfway point talk turns to what Chabrol was going for with Bellamy. It's actually quite good, and we see what a bullish, creative personality Depardieu really is.

FINAL THOUGHTS:
Rent It. One wishes for more from the last film in a career as distinguished as Claude Chabrol's, but Inspector Bellamy makes for an unsatisfactory coda to the French director's filmography. The movie stars Gerard Depardieu as a seasoned detective investigating a case of fraud and murder while also trying to contend with his own troubled brother. The storytelling is clear and concise and the performances outstanding, but Inspector Bellamy feels like it was carved out of a much larger cinematic block that we aren't privy to. As a middle chapter or even the end of a longer series, it might work, but as a stand-alone, it seems maddeningly incomplete. 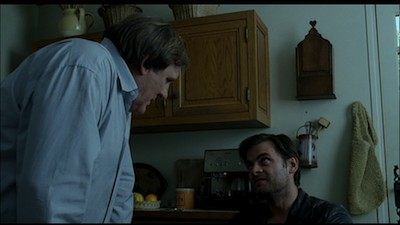