Paramount // Unrated // October 26, 2010
List Price: $62.99 [Buy now and save at Amazon]
Review by Stuart Galbraith IV | posted November 26, 2010 | E-mail the Author
Since reviewing CBS/Paramount's Blu-ray of CSI: Crime Scene Investigation - The First Season (2000) a year-and-a-half ago I've become quite a fan of the series, slowly catching up with a show I'd never seen at all until that Blu-ray set. Television historian Stephen Bowie is another enthusiastic fan, though he cautioned me against CSI's two less popular spin-offs, CSI: Miami (2002-present) and CSI: NY (technically CSI: NY/Crime Scene Investigation, 2004-present), saying both were terrible.

Nevertheless, I thought I'd give CSI: New York - The Sixth Season a try and, sure enough, Stephen's complaints about the show turned out to be pretty justified, though I found it watchable TV junk food - moderately entertaining time-killers. Intriguingly, this set includes an entire crossover trilogy that begins on CSI: Miami, shifts to New York for its second episode, and then concludes as an episode of the Las Vegas set CSI: Crime Scene Investigation, all three featuring the latter show's star, Laurence Fishburne. His presence in each CSI universe has an interesting effect; he helps make that CSI: New York episode one of the season's best, but his appearance also underscores the show's basis weaknesses.

Tackily packaged in "Do Not Cross" crime scene "tape," CSI: New York - The Sixth Season collects 23 episodes plus the two crossover shows on seven single-sided, dual-layered DVDs in 16:9 enhanced widescreen. The shows look and sound great, and there's a lot in the way of extra features. 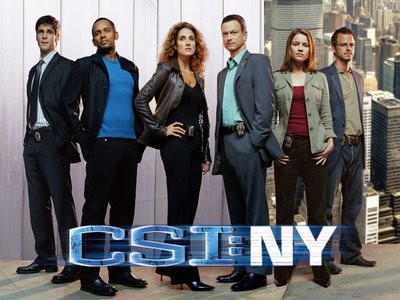 Some cast changes: The season opens with the resolution to a lame fifth season cliffhanger, in which several cast members are gunned down in a blaze of gunfire. Who will survive? (Or, more specifically: Who will survive their contract renewal negotiations?) At the beginning of Season Six, one character is dead, and a serious injury threatens to leave another permanently paralyzed. More importantly, later in the season actress Kanakaredes, with CSI: NY from its inception, leaves the show for good only to be replaced by Det. Jo Danville (Sela Ward).

In addition to the trans-franchise crossover trilogy, there are several multi-episode story arcs, the biggest one concerning a strange, disfigured serial murderer (Skeet Ulrich) dubbed the "Compass Killer."

CSI: New York is cut from the same CSI mold, with the same kinds of stories, investigations, high-tech laboratory equipment and databases, and like the other two shows it features a few bars of a song by The Who under its opening and end titles (in this case, "Baba O'Riley"). Yet despite the tried-and-true format and the same basic makeup of character types as CSI - world-weary veteran investigator leading the team, strikingly attractive older female second-in-command, eccentric science/computer geeks in the lab, philosophical medical examiner, etc. - CSI: New York is populated with much less interesting characters working through clichéd personal conflicts. Over several shows one character struggles to learn to walk again after that paralyzing gunshot wound while another, overcome with grief and guilt, goes on a bender and almost loses his job.

It is headlined by stalwart Sinise, who's like The Great Stone Face of the police procedural, a Buster Keaton type whose facial muscles barely moved in the 12 or 13 shows I watched for this review. Though a fine actor, Sinese's character here is like a modern-day version of the colorless leads that used to populate B-level war and science fiction movies of the 1940s and '50s: John Agar, Rex Reason, Hugh Marlowe types - grimly determined but humorless and as two-dimensional as cardboard. He's got nothing like the intriguing eccentric ambiguities of William Petersen's CSI character, or the hulking-but-sensitive attributes of Fishburne's, Petersen's replacement. More importantly, Sinise's character lacks that most vital trait: innate, insatiable, driving curiosity. At crime scenes he often acts like an impatient man at the end of a long line at McDonald's. The show's grating short-attention-span-theater pace, with its MTV-style cutting, never lets up. It's like a TV show on speed and this as much as anything else inhibits any real character development. In these 42-minute "hour" shows, roughly 32 minutes is entirely devoted to storytelling, i.e., the investigation. To say that leaves just 10 minutes for all character development would be generous. In some episodes Sinise doesn't seem to be on-screen for more than five minutes tops.

Like the other CSI shows, CSI: NY is slickly produced but with one problem pretty obvious even to non-natives of New York: almost none of it is shot there. Unlike that other big police procedural franchise Law & Order, CSI: New York is mostly filmed on stages at CBS Studio Center, the former Republic Pictures Studios in the valley northwest of Hollywood. Some New York locations are faked in downtown Los Angeles, but a lot of it is blue-/green-screened, sometimes ingeniously, often shoddily. (In one show characters are aboard a small boat supposedly in the middle of the Hudson River. It's not convincing at all, like something out of Sid & Marty Krofft.) On a technical level overall the process work is usually okay, but the series completely lacks the authentic New York flavor of the best Law & Order shows.

Presented in 16:9 enhanced widescreen, CSI: NY/Crime Scene Investigation - The Sixth Season (2009-2010) looks terrific if over-stylized. The region 1 discs include three or four episodes per single-sided, dual-layered disc. The 5.1 Dolby Surround is fantastic, like the visuals a bombardment of music, ambient audio, and some directional dialogue. A Spanish stereo track is included, and the discs are closed-captioned.

CSI: New York is about half as good as the original CSI: Crime Scene Investigation, which somehow never seems to grow stale and which has survived numerous cast changes. CSI: New York follows CSI's well-worn path, but its lack of interesting characters and melodramatic, clichéd teleplays make it no better than TV junk food. Rent It.