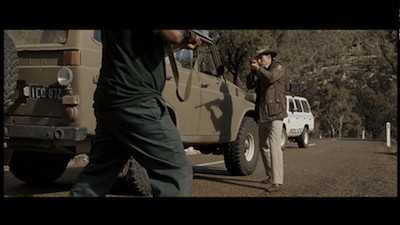 Given how many heavily hyped films turn out to be tepid disappointments, it's nice when something you've barely heard of can come along and surprise you.

Red Hill is a modern-day western out of Australia that got a very limited theatrical release last year. The cynical part of me thinks that the only reason it got any attention at all is because it stars Ryan Kwanten, who plays Jason Stackhouse on True Blood. Even if that is the case, I can't say I mind. Red Hill is an entertaining little movie, and it deserves to get attention however it can.

Kwanten stars in the movie as Constable Shane Cooper, a city cop who has moved to the quiet rural town of Red Hill because doctors recommend a more subdued atmosphere for his pregnant wife (Claire van der Boom from The Square) to better ensure she can bring their baby to term. Though the reasoning for the relocation is sound and logical, Cooper is also followed to this remote outpost by a dark cloud. Back at his old assignment, he failed to pull the trigger in a stand-off and got himself shot instead. This gives his new boss, a sheriff they call Old Bill (Steve Bisley, Mad Max), reason to doubt Shane, made all the more worse by the fact that the new guy forgot which box he packed his sidearm in. Ooops.

There isn't much time for Shane to turn this first impression around. The day he arrives, a murderer from Red Hill breaks out of federal prison. Jimmy Conway (Tom E. Lewis, The Proposition) was a local aboriginal convicted of rape and murder under Bill's watch, and everyone knows that he's coming back to these dusty roads for revenge. Why he would have such a mad-on for Bill is a bit of a mystery, giving Shane reason to doubt his boss instead. As soon as Jimmy hits town and begins silently taking out the sheriff's posse one by one, you know that there are two things that are going to have to happen for anyone to get out of this mess alive: the truth will have to come to light and Shane is going to have to find the guts to pull the trigger.

Red Hill is the first full-length feature from Patrick Hughes, who not only wrote and directed this movie, but he edited and produced it, as well. Hughes wastes no time putting hooves in the dirt: this updated version of a horse opera moves fast and with purpose. Early in the movie, Shane is advised that if he wants to control his steed, he just has to look where he intends to go and the horse will follow. I wouldn't be surprised if Hughes had a similar mantra for his production.

There isn't much by way of innovation in Red Hill. It's a straight-up revenge story, with Jimmy stepping out in the streets at High Midnight and taking all comers. The action is swift and bloody, and though there is a lot of serious business going on here, Hughes embraces the cowboy tropes fully and doesn't forget to have a sense of humor. As Shane accepts what he must do, composer Dmitri Golovko gives Hughes his best Morricone impression, and cameraman Tim Hudson takes his shot wide, showing Shane whipping his pony against a majestic night sky. There is also a definite glee when it comes to gore. Some of the more gruesome killings revel in bloody, old-school Fangoria effects, with Jimmy adopting tools unique to the Australian outback.

Fans of True Blood will be particularly impressed by Ryan Kwanten. Shane Cooper is pretty much the exact opposite of Jason Stackhouse: smart, sensitive, and dedicated. The actor really gets a chance to show his range here, and it didn't take long for me to be able to stop looking at him as Sookie's older brother and start seeing him as a genuine action hero. Most of the other parts are pretty one note, though I will give Tom E. Lewis credit for being an imposing presence onscreen. The mute villain could easily come across as shtick, but he underplays it to just the right effect.

Just yesterday I was watching one of the extras on the new Criterion edition of Samuel Fuller's The Naked Kiss, and in this documentary, Wim Wenders was lamenting that the B-movie was a thing of the past, it was all about maximum profit anymore. The second-tier genre picture had stopped being a viable place for guys like Fuller to hone his craft. Someone should get Red Hill into Wenders' hands, I think he'd like it. Patrick Hughes has made an unabashed B-movie. He's put together a contemporary western that hums with all the expected components. Hughes makes no pretense of it being any more than it is, he just makes sure that Red Hill is the best at what it's supposed to be.

Video:
The DVD for Red Hill has a mostly good but inconsistent picture. Some scenes tend to run a little soft in the details, with shimmers around the edges of figures and spotty blacks. These are mostly early on, though, and eventually that stuff smoothes itself out and the picture remains vibrant for the long haul. The anamorphic transfer is at 2.40:1, so it's good and wide.

Sound:
The 5.1 Dolby mix of the English soundtrack is good and delivers the information in a clear fashion, but I was surprised there wasn't more going on between the speakers. I didn't notice much in terms of isolated effects in the back speakers. I would have expected the gunfire to zing around more. It's serviceable, though.

Subtitles are available in standard English and also Closed Captioning, as well as Spanish.

Extras:
None, unless you count a handful of trailers--none of which are for Red Hill.

FINAL THOUGHTS:
Highly Recommended. The Australian western Red Hill is an entertaining, no-nonsense genre picture that updates the cowboy revenge flick and makes it perfectly believable in the modern era. True Blood's Ryan Kwanten impresses as a believable police officer with a conscience, and the bloody gunplay should satisfy action fans hungry for a good shootout. It's not an entirely new story, sure, but it doesn't have to be. It's also not a dumb movie, it does what it does with the utmost of quality, so you can pop your popcorn and sit down and know you're in for a good evening's viewing.