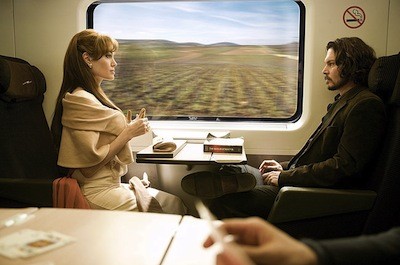 One of my favorite Hitchcock movies is To Catch a Thief. It's not one of the more revered entries in his canon, because truth be told, it's kind of not very good. The plot is full of holes, and the overall narrative doesn't really hold up. Even so, I might argue it's one of his most beloved. No one who likes To Catch a Thief watches it for its story the way they might with one of the bigger Hitchcock movies. We watch it because we love seeing two confident, beautiful people--namely, Cary Grant and Grace Kelly--flirting on the French Riviera, playing games, making us guess who is zooming who and why. The whole thing is light as air and lacks a care in the world. It's the best cotton candy you can eat.

The Tourist stars Angelina Jolie as Elise Clifton-Ward, a mysterious British woman with posture so perfect it's intimidating (sit up straight in your seat, young man!). She is a person of interest for Interpol (or quite possibly whatever England's tax bureau is, it's not clear) because she is the lover of an international thief named Alexander Pierce who owes 740 million pounds in back taxes to the British government for his ill-gotten gains. So far, Inspector John Acheson (Paul Bettany) has spent 8 million pounds of the Queen's money chasing Elise in hopes of catching her man, whom it is rumored spent $25 million to get a new face from a plastic surgeon in Brazil. That adds up to, like, I don't know, almost a billion or something. When a letter arrives by courier telling Elise to go to Venice, the game is afoot again.

On the way to Italy, Elise picks up Frank Tupelo (Johnny Depp), a meek math teacher from Wisconsin who is on vacation and still mourning the loss of his wife from three years prior. He's a sad guy, but nice, and he can't believe his luck when this gorgeous woman chooses to sit across from him. She then takes him to her hotel and kisses him on the balcony--while Russian gangsters and several police agencies watch. Now they all think Frank is Alexander Pierce, and they want what he owes them. As it turns out, a lot of Alexander's fortune was pilfered from a bad guy named Reginald Shaw (Steven Berkoff) who has been waiting for the crook to reemerge.

And so it goes. Elise ditches Frank, Frank gets shot at, Elise rescues Frank, they fall in love, he learns not to be a wuss, they share secrets, double-crosses, etc. Sounds like fun, doesn't it? Two beautiful people flirting in Venice. Why not? 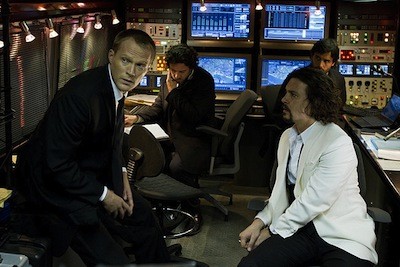 The Tourist is apparently yet another remake of a European movie, something called Anthony Zimmer. I've never heard of it, so I can't tell if they got it right the first time, but I can guarantee you they didn't get it more wrong. The redo is written by Christopher McQuarrie (The Usual Suspects) and Julian Fellowes (The Young Victoria), along with the director Florian Henckel von Donnersmarck. Those are some good people, they are actually the reason I went and saw The Tourist, even moreso than Jolie and Depp. For as much as I was bored by the movie, I don't blame the writers (or, at least, two of them). I'd put money down that The Tourist had an amazing screenplay. While watching it, I would regularly divorce myself from what I was seeing and pay attention instead to what was happening and what was being said, and goddamn, The Tourist is a well-written piece of cinema.

The problem is, it's staged all wrong. Florian Henckel von Donnersmarck is the director of the amazing German film The Lives of Others, a smart and thought-provoking drama about living under the surveillance of the Communists in 1980s Berlin. It's an outstanding film with serious intentions. Someone forgot to tell Florian Henckel von Donnersmarck that The Tourist is a completely different movie and requires an entirely different tone. The director approaches the material with the same seriousness, and what he's ended up creating is erudite eye candy that has lost all its sense of fun. The entire plot, even its ludicrous third-act machinations, are presented with an uptight sophistication that drains the blood right out of all the good writing. The plot is solid, the dialogue is crisp, and even under all of Florian Henckel von Donnersmarck's laborious style, The Tourist is actually romantic as hell--but it's never thrilling, it never gets any zing. Even the music is overdone, the swells of orchestration cresting far beyond any threshold of whimsy. It's been a long time since a movie's music has put so much effort into trying to make sure I knew exactly what the filmmakers wanted me to feel.

One has to wonder how much control the lead actors had over The Tourist, because the director handles them with the softest of kid gloves. Angelina Jolie barely speaks above a whisper, her chin always at precise angles, and no one ever messes up her hair. Au contraire, seas of people part wherever she goes. Man and woman alike hang back and stare at her, because they can't believe their eyes. We get it! She's beautiful! We knew that going in. I appreciate that you have this gorgeous treasure you want to show off, but geezy creezy, at one point, she's piloting a speed boat and fighting off killers and her head scarf barely comes undone. 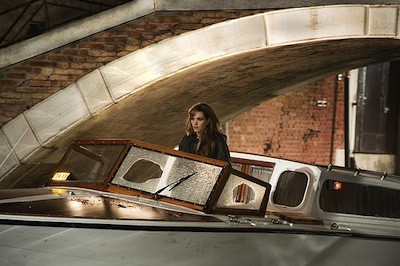 For his part, Johnny Depp humbly mumbles his way through the movie. He's just pleased to be here, it seems, he doesn't want to ruffle any feathers. We get flashes of what he could be--there is a moment where his character makes an inexplicable change and is newly flush with confidence, and Frank approaches Elise at a grand ball. It's just a tease, though, the movie never takes off the way this sequence suggests it might, the way I kept hoping it would.

I haven't been this frustrated and unfulfilled, in all honesty, since I saw Burlesque three weeks ago. I didn't expect either of these movies to be classics, but it's so irksome to see them both get so close to something and then shy away. It would have been so easy to make these films entertaining. Let Burlesque be the musical it was intended to be, and let The Tourist be an old-fashioned romantic caper. Is it so hard? Let the whole thing be over the top and silly and, most important, charming, and you'd have had me all the way. To use another pop culture reference, seeing The Tourist is like watching Madonna going on talk shows after she had her diction lessons. All you can do is wonder what happened to the ribald and raunchy seductress that used to be such a good time. This chick's a drag!

You know who gets it, actually? Timothy Dalton. He does more playing Paul Bettany's boss in his two scenes here than Florian Henckel von Donnersmarck does in the other 95 minutes combined. He's gallant and witty and he carries himself like a damned movie star. (See also: Stanley Tucci in Burlesque.) Leave it to the old guy to remember what Cary Grant was really like. Maybe it's time that someone wrote a movie about a mature gentleman stealing jewels on the French Riviera and hired a pretty young blonde to star alongside Timothy Dalton, let the guy work his magic. Hell, Hollywood remakes everything eventually anyway. To Catch a Thief 2011. Boom! There it is. Box office gold. Someone send me my option money, please! 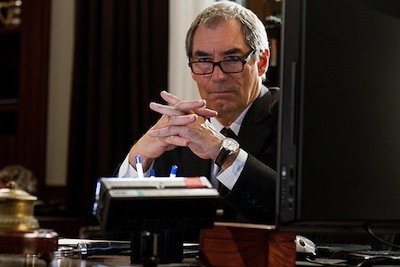