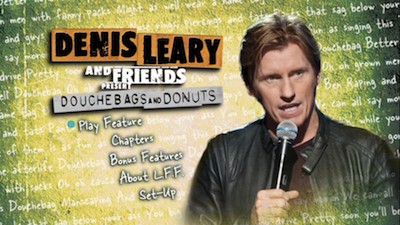 Denis Leary & Friends Present: Douchebags & Donuts is a new comedy special recorded live in New York late last year. This particular performance--which features stand-up sets by Leary, Whitney Cummings, Lenny Clarke, and Adam Ferrara--was the capper to a country-wide tour, and all the shows were done in part to benefit the Leary Firefighters Foundation, a charity set up by the Rescue Me star. Money from sales of this DVD will also be donated to the charity, so this is laughter for a good cause.

Which makes me feel like a real schmuck for not enjoying it all that much.

I'm a fan of Denis Leary's stand-up. No Cure for Cancer is the third comedy album I ever owned, beat only by Eddie Murphy and Bill Cosby. His rapid-fire rants were right up my alley. Whether one of his MTV promos or the "Asshole" song, and even when he talked about stuff I didn't understand at the time, I still liked it. Hell, I was even a defender of Two if by Sea, his romantic comedy with Sandra Bullock. It caused me to develop a very simple rule for evaluating rom-coms: if you like him and you like her and you want to see them get together, it's a good movie.

I say this all because I want to provide some perspective on how I entered into Douchebags & Donuts. It certainly wasn't with my arms crossed or a challenging scowl on my mug. I was looking forward to a good dose of Leary. I was also looking forward to a real set from Whitney Cummings, who has made me laugh on various other comedy specials and talk-show appearances. That's at least a 50% familiarity ratio going in right there. 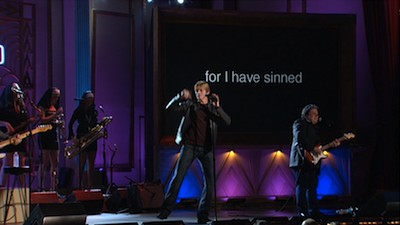 Douchebags & Donuts is set up a little like a variety show. It kicks off with Leary performing a musical number with his band the Enablers, a new song ridiculing the Catholic Church. Leary performs a couple of songs in the show, including another new one, "Douchebags," but none of them are as strong as "Asshole," which he of course uses to ring the show out. If his best routine in this vein is still the one that's two decades old, maybe it's an aspect of his act he should let lie. Leary follows the opening number with a full comedy set, and kudos to the guy for being a gracious host and taking pole position himself. His material for the show is basically two parts: a long rant about various douchebags, including closeted homosexual Republicans and an analysis of celebrity mugshots, and a second bit about the insane side effects of various in-vogue medications. Both are done as multimedia presentations, with two big screens projecting images to illustrate Leary's tirades. It takes him a while to warm-up, but by the time he's into James Brown fleeing from the cops and anal leakage, the fire takes shape.

Whitney Cummings takes the stage in the second slot, and her jokes largely center on the differences between men and women. She's particularly vicious to both sides, and her delivery is intense and loud, almost like she's trying to compete with Leary for the angry factor. Maybe she has the audience sussed out and she's playing to the level of the room, but it was a little abrasive. Lenny Clarke follows her, and he's more of the same, particularly in volume and tone. I'm not even sure he had any standard jokes in his set, his act is more like a coked-up Paul Harvey where the rest of the story is always about how insane Lenny Clarke is. Honestly, I barely laughed during his routine. Cummings nailed a couple of punchlines, but Clarke flatlined for me.

Maybe that's why I was so charmed by Adam Ferrara's closing set. He focuses almost entirely on his recent engagement and the quirks of his relationship with his fiancée. More often than not, this kind of bliss turns a comedian's act into creeping death, but Ferrara manages to find the right combination of sweetness and sarcasm to pull it off. He acknowledges the bipolar aspect of love immediately, how the person you adore most can also be the one who really annoys you, and that sets him up to get a little emotional and then immediately pull the rug out without it seeming hypocritical or mean. 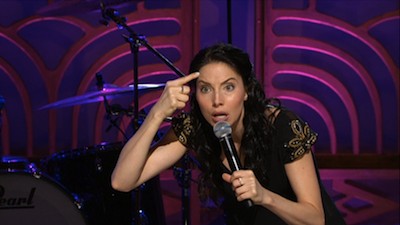 I definitely got the most out of Ferrara's set, though that was buoyed more by amused chuckles than real belly laughs. I can't quite put my critical finger on why I didn't enjoy Douchebags & Donuts more. Comedy can be so hard to quantify, and when dealing with professionals such as these, who have the skills and the technique and seem to be on their game, it's tough to gauge exactly why their bits don't come off. Perhaps the special has too much hard-charging anti-PC anger. The onslaught of loud certainly kept me from settling in. It could be a matter of timing--which, in comedy, is everything--and I just wasn't in the right mood to go with the crass rebellion that the night embodied. Then again, I would think Leary's boisterous defense of common sense would be cathartic in these crazy times. It's a puzzler.

Let's not forget, too, that this is for a good cause. The Leary Firefighters Foundation gives money to firehouses to buy them better equipment so they are as prepared to do their job to the best of their abilities. So, even a night of middling entertainment gets a little boost from good intentions. Douchebags & Donuts may not hit its every mark, but it's at least a good distraction for 99 minutes, which some days can be good enough. Like I said, these are crazy times, so it never hurts to relax and have a few giggles.

By the way, watch through the credits, there's a bit at the end of them that actually puts a nice lid on the whole program. 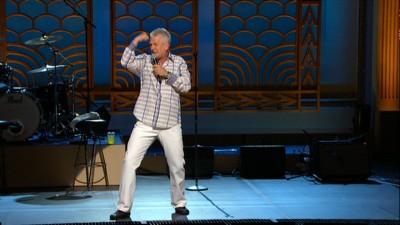 Video:
Comedy Central brings Douchebags & Donuts to disc as a widescreen transfer and it looks pretty good. Outside of some slight interlacing, the picture is sharp and the color and detail look natural.

Sound:
Viewers have two audio options on Douchebags & Donuts, either a 2.0 or a 5.1 mix. I didn't notice a big difference between either. I would assume the 5.1 is intended to make you feel like you're there in the audience, and there is some more audience/performer separation in the mix, but really, the jokes are the thing, so either choice will work just fine.

The audio is uncensored, too, unlike some of the forthcoming Comedy Central broadcasts (it depends on what time of night you watch). The special is premiering this Sunday, January 16.

Extras:
Six minutes of extra bits include the Denis Leary songs "Fuck You" and the "Traditional Irish Folk Song," the weaker cut off No Cure For Cancer. An eleven-minute documentary "Snapshots from the Road" shows antics from the tour, including clips of other performances and horsing around offstage. Whitney Cummings is strangely absent from most of it. Either she wasn't on the whole tour or she was smart enough to take a different bus than the dudes. Finally, "Detours" is five minutes of several more quick clips.

There is also a short text explanation of Leary's charity and a PSA video.

FINAL THOUGHTS:
For as much as I want to like Denis Leary & Friends Present: Douchebags & Donuts, and for as much as I want to encourage everyone to support Leary's cause, when it comes down to it, the comedy just wasn't there for me. I enjoyed it fine enough, and the comedians give it their all, but it just didn't make me laugh enough to ever see myself revisiting Douchebags & Donuts in the future. For that reason, I have to say Rent It. 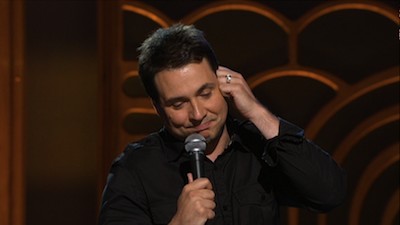