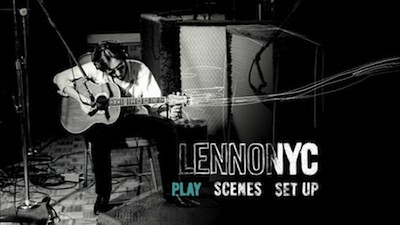 F. Scott Fitzgerald is oft-quoted for opining that in American life there are no second acts, so it's with some irony that one of the most famous British figures of the last half of the 20th Century found his second act on our shores. Being a Beatle must be a hell of a thing to have to live up to, and for John Lennon, the key ultimately became to stop trying. Quit being a Beatle and be whatever it is you are. The new documentary LennoNYC chronicles that process, as well as so much more: John Lennon's second act on the streets of the Big Apple.

Michael Epstein's film picks up the story in 1971, when John Lennon and Yoko Ono, sick of the cruel barbs the British press kept slinging at Yoko, jumped across the pond to find a little peace. New York was artistically and politically vibrant, and John was largely left alone when he was out and about. It was perfect for the couple. They soon plugged into the activist movement and gathered new musicians around them, recording the Plastic Ono Band album in between benefit concerts and rallies. Not everyone was pleased about these famous people giving a jolt to the waning unrest over the Vietnam War and the imbalance of power in American society; this new start also brought on a four-year battle with U.S. Immigration, who tried to deport Lennon, purportedly over an old drug conviction, but really motivated by so much more.

This ongoing fight is just one of the many threads that Epstein finds to string through LennoNYC. The next decade would be creatively fertile for both John and Yoko, and there would also be many trials and tribulations. The negative reaction to John's fervent protest music ultimately put John into a downward spiral, and self-doubt took over. LennoNYC takes an honest look at the singer's dark side, understanding that his demons were as much a part of his art as peace and love. It's a pretty standard rock story: success, failure, self-destruction, and redemption. Some things keep working for a reason. LennoNYC is amazing.

Epstein cobbles together archival footage to show us John and Yoko as they were back then. There is concert material, as well as interviews, including a fantastic appearance on the Dick Cavett show promoting the single "Woman is the Nigger of the World." Cavett appears to talk about it, and Epstein also interviews members of John's different backing bands, his record producers, photographer Bob Gruen (who took many of the famous photos of John and Yoko from the period), and also Elton John, whose collaboration with the Beatle on "Whatever Gets You Thru the Night" in 1974 was a major turning point for Lennon. None of the Beatles appear, nor do any of John's family--not even Sean, who became the focus of the performer's life in his last years. There is, however, a candid and emotional interview with Yoko Ono, who bares her soul and her heart. Because amidst all the music and the commotion, the true core of LennoNYC is the love story. The ongoing romance that the pair shared, complete with peaks and valleys just like any other coupling, is a testament to real love. You can argue all you want about Ono's artistic abilities (I'm still not a fan of her music), but you can't deny the importance she had in her husband's life and career. 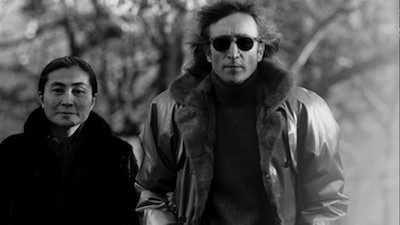 The funnest stuff in LennoNYC has to be the outtakes from John's recording sessions. Scads of previously unheard studio banter keep the documentary lively and give us a real idea of John's working method. Epstein sometimes animates Lennon's words to illustrate these bits, including a fascinating re-creation of John's editing process, showing how he crossed out and changed lyrics when developing the song "Mind Games." It's one of the few times I've ever seen the art of rewriting shown in a movie. Actually, it may be the only time. No other example comes to mind.

LennoNYC, of course, ends with John's assassination in 1980, just as his career was getting back on track. Epstein smartly doesn't spend an inordinate amount of time on this, and he doesn't rehash the event at all. Instead, he looks at John's death as the emotional punctuation of his relationships with Yoko, his art, and really, his fans. Images and audio recordings of the mourning crowds outside the Dakota are touching, yet they have a staggering impact when Ono explains how painful it was to hear the constant singing below her bedroom window. The outpouring of love for John only served to remind her that he was gone.

As much as the story of the Beatles gets endlessly rehashed, and as much as it still remains interesting, there is not nearly enough attention paid to what George, Paul, Ringo, and John did after. While it's probably too soon to call LennoNYC the definitive film on John Lennon's second act, it certainly will be the one that all future efforts are going to have to work to beat.

By the by, Fitzgerald has so many better-written lines than that second act one, his ghost must be as sick of hearing it trotted out over and over as Lennon's ghost is probably tired of that whole "bigger than Jesus" thing. Let it be a lesson to you: being pithy is sometimes its own curse. 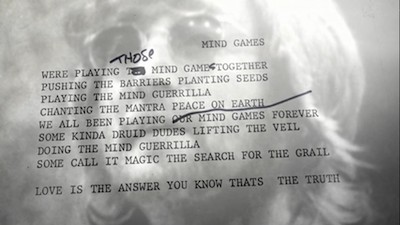 Video:
LennoNYC comes to DVD with a sharp widescreen transfer. The anamorphic image is excellent, with nice colors and good resolution. Even the archival footage looks great. I didn't notice any pixilation or other problems with digitization. Fresh and new as a baby.

Sound:
There are two separate audio mixes to choose from: a stereo mix and a 5.1 mix. Given that LennoNYC is more than a talking heads documentary, there is actually some benefit to the 5.1. Namely, the music is mixed really well, with effects bouncing between the speakers. You'll want to turn this one up loud.

Extras:
No extras at all outside of a paper advertisement for the recent re-release of Lennon's solo albums.

FINAL THOUGHTS:
Highly Recommended. LennoNYC is an excellent music documentary, looking at the stateside life of John Lennon and Yoko Ono in the 1970s, from the aftermath of the Beatles to John's murder in 1980. Generously seasoned with clips and music, and featuring new interviews--including a surprisingly open talk with Ono--LennoNYC gives us the story, warts and all, of an amazing artist's journey to rediscover himself after being in the biggest band in the world. Not just for Beatles fans, but for anyone who appreciates a good story of rock 'n' roll, romance, and redemption. 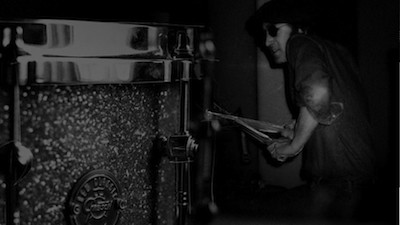