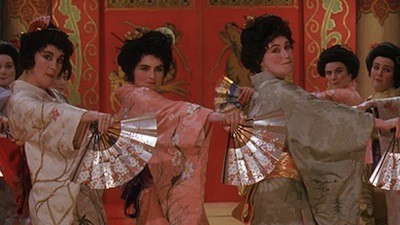 In 1885, the writing team of Gilbert and Sullivan were at the peak of success. Even their admittedly mediocre show, Princess Ida, which had just premiered at the Savoy Theatre in London, was predicted to be a smash, despite chafing reviews that called the pair on the proverbial carpet for the repetition in both Gilbert's comical lyrics and Sullivan's orchestral melodies. As a pair, they could seemingly do no wrong.

Mike Leigh's 1999 film Topsy-Turvy peeks in on the famous theatrical legends just as Ida is taking its creative toll on the duo. Arthur Sullivan, played by Allan Corduner, is overworked and unsatisfied, and for the sake of his health, he leaves for the South of France. Upon returning, he rejects his partner's new libretto, instead swearing to write his own grand opera where his music will not be outdone by the singing. Taken aback, W.S. Gilbert, portrayed with panache by Jim Broadbent, can't help but take it personally. He has been laboring on a musical in which a magical potion transforms the citizens of a European mountain town into whatever they wish to be. Sullivan's rejection of this fanciful notion seems little more than a rejection of him personally.

The comedic switch-up in this lost idea was an old stand-by for Gilbert and Sullivan, and it is a perfect example of their "topsy-turvy" style. In their musicals, everything gets turned upside down. Expectations are raised, and then flipped, to the point that the flipping had become what was expected. This is what Sullivan wants taken out of their future work. He wants to portray human drama rather than stick to formula. This doesn't just worry his writing partner, but also the owners of the Savoy (Ron Cook and Wendy Nottingham), who have the team under contract. Art and commerce, the eternal struggle! Could Sullivan turning his own artistic endeavors topsy-turvy spell the end of everything?

As it turns out, no, it doesn't, and the result is the major thrust of Leigh's movie. Topsy-Turvy is the story of the creation of The Mikado. When Sullivan's wife, Kitty (Leslie Manville, so good in Leigh's most recent film Another Year), drags him to a Japanese exhibition, the lyricist is inspired by the things he sees. He starts writing a new comic opera about a Japanese executioner, and suddenly a whole new ball is rolling. Leigh's film, which he both wrote and directed, chronicles all the backstage planning, all the bruised egos and the hard work and the dangerous peccadilloes, that keep a theatre company running. Topsy-Turvy is an elegantly crafted ensemble piece, with enough side plots to give each important performer their due and allow the actors to establish believable and complete characters, but never so much that any one can derail the main story. It's an often-brittle tale, examining the insecurities of performing life. The very need for acceptance and validation is pretty much its own guarantee that there will never be enough of either, not even when you're on top of the world. That, in its own way, is topsy-turvy, as well.

Mike Leigh and his production team meticulously re-create the Savoy and its lavish stage productions. In addition to songs from The Mikado, which are sprinkled throughout the narrative at key moments, we also get glimpses of Princess Ida and The Sorcerer, both to show the Gilbert and Sullivan style and also, in the case of the latter, to show the magic they created, both as acts of fiction and in the act of creating that fiction. Though Leigh is often known for his far more serious human comedies, the kind of thing that Sullivan could have probably appreciated and Gilbert might have dubbed boring, Topsy-Turvy is more expansive and fancy than his modern kitchen-sink style. Dick Pope's photography has a sophisticated sweep that frees it from the theatre's proscenium arch and transforms stage craft into cinema craft. We are never stuck on the boards, we are with the audience and the crew and the performers all at the same time.

I guess in a way we could also call the film's extravagant style "topsy-turvy" in that it does turn our expectations of a Mike Leigh movie on their heads--and with rather successful results. The attention to detail that Leigh takes is essential to his story. In his own subtle switch-up, once The Mikado is underway, the roles reverse, and while Sullivan contentedly trucks along with the new material, Gilbert gets serious about creating something authentic. While the music and even the lyrics are very British, Gilbert wants everything else to be true to the source. He rejects choreographed kitsch and tries to mimic what he sees in kabuki theatre and real Japanese life (albeit the lives of the immigrants visiting his country). Costumes are all based on traditional sketches, and even slimming undergarments are banned because it would change the natural shape of a kimono. As Broadbent plays him, Gilbert goes from the typical humorous blowhard to an artist of great intensity. My favorite moments are when the writer comes off the cuff with a clever joke and chuckles to himself about it: the self-satisfaction of one's own humor.

The whole approach of Topsy-Turvy is subtle and generally light as air. The intricacies of the story structure aren't immediately obvious. Leigh's anecdotal technique keeps an even pace, letting each backstage story play out, hitting the punchlines (which are uniformly funny), and then moving on. This makes it a little surprising when the film springs a heavy denouement on the audience. Despite all the laughs that Leigh has gathered along the way, he has also slowly exposed the darker sacrifice of artistic obsession. In their pursuit of acclaim and adulation, the troupe not only demands a lot of themselves, but also the people around them. Both Gilbert and Sullivan have chosen the ephemeral muse over the permanence of family, and what that means for the women in their lives comes out in different, yet equally heartbreaking ways. Manville gets a powerful scene where she describes her own surreal version of a Gilbert and Sullivan production, while Shirley Henderson, playing an actress who longs for Gilbert's approval, gets one last monologue and the movie's final song. She sings "The Sun Whose Rays Are All Ablaze," a solo ballad from The Mikado that, though quiet and plaintive, rings out as an insistent declaration of her determination to tell her own story.

Tomorrow, she will sing the song again. And there will be another production to follow. Even Kitty asks Gilbert what comes next, though The Mikado has only just premiered. The quest for originality demands its own repetition. Topsy one day, turvy the next.

Video:
The new Criterion Blu-Ray of Topsy-Turvy packs an incredible level of detail into its 1.78:1 transfer. Dick Pope stages many intricate shots of the theatrical production within the film, shooting from the theatre balcony, or sometimes right in the thick of the chorus, and in either case the image goes deep and the individual flourishes all get their proper clarity. Colors are rich and vibrant, with excellent skin tones that become all the more apparent as the stage actors wash away their make-up and we see the difference between artifice and naturalism up close. There are no hints of digital noise reduction, nor are there any other tell-tale signs of technological manipulation. The image is clean and vibrant throughout.

Sound:
The soundtrack is mixed in surround sound, DTS-HD Master Audio. The mix achieves the appropriate musical bombast and fills the room without distortion or any wonky rumbling. The dialogue is all crisp and easy to hear, and the subtle effects at different levels in the speakers are used sparingly, yet effectively.

Closed Captioning is available for the deaf and hearing impaired.

Extras:
Criterion has packed a bunch of extras onto this new release, starting with their usual booklet, which features photos, credits, and an essay by Amy Taubin. There is also an explanation of the artistic technique that Yuko Shimizu used in creating the cover; interesting to note that, judging by the Criterion website, the Blu-Ray cover is printed with the image oriented one way and the standard DVD has it printed the other way. Chapter listings are printed on the inside front cover of the case.

Views from Mike Leigh come in two forms: a vintage 1999 audio commentary, which in itself is detailed and comprehensive, and a recent video conversation with musical director Gary Yershon (37 minutes, 22 seconds) where they get more into the musical elements of the movie and its subjects. Yershon is an excellent interviewer, drawing Leigh out and illuminating certain aspects of the material that only a music expert would understand. Between the two, we get a great picture of how Leigh identified with the material and how he worked it into his oeuvre and how it alternately pushed him in creative ways. In terms of vintage supplements, there is also a 1999 making-of, coming in just under 10 minutes.

Four Deleted Scenes run varying lengths, all apparently excised to keep the running time down. One is an extended cut of events that occurred after the Princess Ida fall-out and another is an unedited version of Sullivan's visit to a brothel; still, another is a complete song, "If Patriotic Sentiment is Wanted." The shortest is Sullivan's statement of artistic intent at a party. These come from an early workprint, and the video is a little worse for wear.

Perhaps most pleasing of all of these is a the short film, A Sense of History (1992; 26 minutes; presented in HD), written by and starring Jim Broadbent, directed by Mike Leigh. Broadbent stars as the Earl of Leete. Mostly a one-man show, it features the Earl leading a camera crew around his family's opulent estate, which has been in the clan for over 900 years. As he conducts the tour, talk turns wistful and nostalgic, and soon the family history turns dark and the personal history gets darker. It's all told with the same matter-of-fact, upper-crust sense of self. There is no real reflection, no remorse: just the facts of privilege. It's an excellent piece of work, smartly and subtly packing a lot into a very short time span.

Finally, there are TV commercials and a theatrical trailer.

The standard DVD is a two-disc set, but the BD puts everything on one disc.

FINAL THOUGHTS:
Mike Leigh's Topsy-Turvy is a complex delight, funny and touching and thought-provoking and rich in narrative layers. Jim Broadbent and Allan Corduner play Gilbert and Sullivan, the most popular theatrical composers of their day, and Topsy-Turvy follows them through the artistic crisis that spawned The Mikado. Leigh details the intricacies of the production, at times giving the spotlight to the chorus of actors and the backstage impresarios that put the show together, questioning why they all do what they do. The new Blu-Ray release looks spectacular, and Criterion packs it out with great extras. Highly Recommended.