Woman, a Gun and a Noodle Shop, A 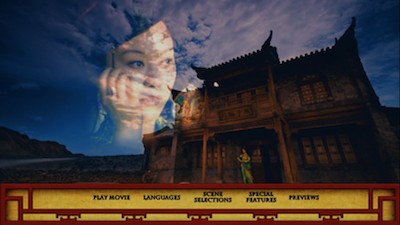 The miserly owner of a small-town noodle shop is stuck in a bad marriage, and though he believes his wife is out to drive him crazy, he doesn't realize she's having an affair with one of his employees. He finds out that information the same day he finds out she bought a gun. The gun part is told to him by one of his other employees, and the cheating is revealed by a stalwart police officer who isn't afraid of sharing information for a few coins. The restaurateur offers the cop a huge bounty to kill both the woman and her lover and make them disappear, but the cop double-crosses the noodle man. He kills him instead and tries to frame the wife and steal the husband's money--only the safe is locked and dead people don't always stay dead.

If the plot of A Woman, a Gun and a Noodle Shop sounds familiar, it's not just because it has many archetypical noir tropes, it's because famed Chinese director Zhang Yimou has done a full-on remake of the classic Coen Bros.' potboiler Blood Simple. The 1985 debut from the Coens was a black comedy and a modern western as much as it was a crime story, and Yimou tries to retain all of these things as he transplants the lurid tale to a remote desert outpost in 18th-century China. The story is basically the same, with a few tweaks and added elements (a secondary character is trying to rob the boss at the same time as the cop), but not all of it lines up.

The fun of Blood Simple is watching the mistakes and the bodies pile up. None of these folks are criminal masterminds, they are far closer to bumbling idiots. In Yimou's version, the noodle shop owner Wang (Ni Dahong) is fed-up with ten years of a childless marriage, and his frustrations emerge as twisted role playing and perverted abuses. His scheming wife (Yan Ni) understandably wants out, and when a band of Persian traveling salesmen come by with weapons, she buys a pistol. The gossip quickly reaches Wang, and it's all downhill from there. The narrative has a lot of twists and turns, and if you aren't familiar with the original movie, you probably won't see most of the curves coming. Even if you do know Blood Simple, Yimou still effectively establishes tension in A Woman, a Gun and a Noodle Shop. Most of the nasty stuff happens over the course of a night, and so there is a lot of silent skulking around and plenty of near misses. There is also some good slapstick and a few moments of violence that are sure to get the blood rushing. Yimou and cinematographer Zhao Xiaoding, who also collaborated on Curse of the Golden Flower and House of Flying Daggers, even try to copy some of Barry Sonnenfeld's trademark mobile tracking shots 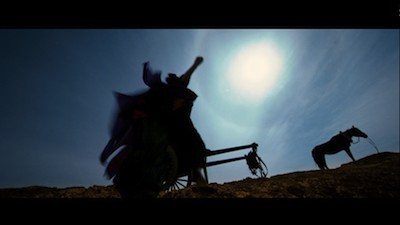 The problem is, it's never quite enough. A Woman, a Gun and a Noodle Shop has some of the humor, some of the violence, some of the visual virtuosity, but Yimou never goes as far as he could with it. The movie looks fantastic, but it's too reserved in everything else. Yan Ni turns in a great performance as the conflicted and bruised femme semi-fatale--she flips between weak and strong, confident and bumbling, seductive and shrill, without every losing her mark--but the other characters are too broadly drawn and thus underdeveloped. Wang never seems all that hateful or menacing, the cop (Sun Honglei) is too much of a cypher, and loverboy Ling (Xiao Shen-Yang) is a total wuss. In the end, A Woman, a Gun and a Noodle Shop is a curious approximation of Blood Simple, but it never becomes its own thing. Maybe it plays differently for those who don't know the source, but it doesn't strike me as a film that would stand very strong on its own.

I don't hold it against Zhang Yimou that he tried to tackle material that many might consider sacred. Given how regularly Hollywood raids the international coffers to remake stuff that was perfectly fine on the first go, it's about time the tables were turned. I'm just sorry to see one of my favorite filmmakers do so little with what is there. A Woman, a Gun and a Noodle Shop is an expertly made, elegantly crafted comedy thriller, but it's frustratingly bloodless. There's no sex, only mild violence, and none of the wickedness. I enjoyed it enough, but a meeting of such talented cinematic minds should have yielded a much more excited reaction. A Woman, a Gun and a Noodle Shop could have been a bold reimagining or even a playful homage to Blood Simple, instead it's like being stuck at a lame party and listening to someone try to describe the movie from memory. It just needs someone to shrug at the end and say, "Dude, I guess you had to be there...." 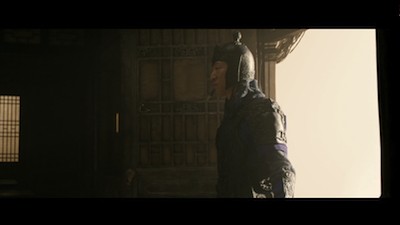 Video:
As much as I am let down by the movie, I am actually more disappointed in the DVD. While the Blu-Ray rated high for picture and sound, the standard version is a surprisingly middling release. The image quality is intermittently soft, with hazy patches in the color and fuzzy edges. I wouldn't rate this as horrible so much as I would average. For a contemporary movie by a renowned director, however, that really is pretty horrible. It's not nearly as vibrant as when I saw it in the cinema, and even a minor film by Zhang Yimou deserves all the best possible care. The wide 2.40:1 aspect ratio is at least correct.

Sound:
The Mandarin 5.1 Dolby Digitial mix is even more underwhelming. Most of the sound is pushed to the front, with little in terms of effects. At times, no sound was coming out of my back speakers at all.

The optional subtitles, shown in yellow, are easy to read and stay within frame, though I found them to be a little big and distorted. You can also get subtitles in French, Spanish, and Portuguese, and there is a Spanish dub presented in surround sound.

Is this a case of Sony pushing us toward Blu-Ray by letting their DVD release appear cursory and underwhelming? A commercial for Blu-Ray plays as the disc loads, so there certainly is some case to be made here for one format suffering in order to promote the other. Obviously, that's just conjecture; make of it what you will.

Extras:
The DVD for A Woman, A Gun and a Noodle Shop has an extensive supplemental section featuring one long documentary broken into 19 parts:

This two-hour tour behind-the-scenes covers mostly the preparation for the movie, and the arrangement tends to be a little loose at times. Still, it offers a nice look at how meticulous Zhang Yimou can be when it comes to his craft (the show pays heavy tribute to him, as you can tell by the titles), gives proper due to the performers, and it does offer some glimpse into how the movie came together. Some of the material gets recycled/repeated, which is kind of weird, but carry on with it regardless, it's mostly worth it. Though some of the material is dry, there are also moments of humor that help keep it light.

There is also a theatrical trailer for the main feature, and a separate option to play the other trailers that come up when the disc is loading--including that BD commercial.

FINAL THOUGHTS:
Rent It. There maybe was no bigger letdown for me in 2010 than A Woman, a Gun, and a Noodle Shop, and now that the DVD is here and it's a middling effort on the part of the studio, it just adds to the disappointment. The idea of Zhang Yimou remaking the Coen Bros. was so crazy, it should have worked--and oh, what an audacious joy that would have been! Instead, a fairly average western comedy emerged, and though not the worst movie you'll ever see, it does irritate for being so far from its own potential greatness. Cinema geeks will still want to have this notch on their viewing belt, but the appeal will be limited for most others. 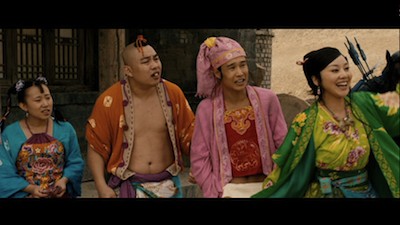