Warner Bros. // Unrated // March 29, 2011 // Region 0
List Price: $19.98 [Buy now and save at Amazon]
Review by Stuart Galbraith IV | posted April 7, 2011 | E-mail the Author
The second and most ordinary of Samuel Bronston's big-gauge roadshow epics filmed in Spain, King of Kings (1961) is a tasteful rendering of the Christ story and was MGM's follow-up to their phenomenally successful release of Ben-Hur (1959). Nicholas Ray directs the film with intelligence and flashes of imagination, but overall the scenes with Jesus (Jeffrey Hunter) are much less interesting than the film's preoccupation with supporting characters like John the Baptist, Barabbas, Judas, and Roman Centurion Lucius. It's visually and aurally attractive, but the acting is uneven and the movie not particularly memorable.

Photographed in Super Techirama 70, a large-gauge process similar to VistaVision (but with a 1.5:1 anamorphic squeeze added), King of Kings should and does look absolutely spectacular on Blu-ray. The limited extra features are all carried over in standard-def from the 2003 DVD release. 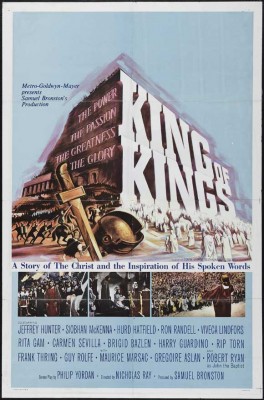 Though it dramatizes the expected highlights, from Christ's birth to the crucifixion and the resurrection, what sets King of Kings apart from similar movies about Christ is the way his actions and teachings are contrasted with rabble-rouser Barabbas (Harry Guardino), who's convinced only violent revolt against the Roman occupiers can bring peace to Jerusalem. In most movies about Christ Barabbas is little more than a footnote, the insurrectionary freed by Pontius Pilate in place of Jesus, although that same year the Anthony Quinn-starring movie about him, Barabbas, was also in theaters.

In King of Kings, the contrasting philosophies of Barabbas and Christ present a moral dilemma for Judas (Rip Torn), one of Barabbas's trusted rebels. This sets up some interesting dramatic conflict, but I also suspect all the business with Barabbas was as much a commercial decision, as it justifies several big-scale battle scenes, including an especially impressive climatic one where Barabbas's army is completely wiped out like so many cornered cockroaches, no match at all for the better armed, better organized Romans.

As Barabbas Guardino is okay, but his thick Brooklyn accent and Burt Lancaster-like cadence is a major distraction, as is Torn's singularly unreal wig, sculpted like a football helmet.

Another large part of the film contrasts the decadence of Herod Antipas (Frank Thring) and Salome (Brigid Bazlen) with the spiritual isolation and longing of Claudia (Viveca Lindfors) and Lucius (Ron Randall), who are less dismissive of the teachings of Christ.

As Christ Jeffrey Hunter (The Searchers, TV's Star Trek) looks the part but he's all sizzle and no steak. Impressively mystical looking at the expense of character, Hunter's Jesus has no charisma. Unlike the rest of the picture, in all of Hunter's scenes I found myself thinking of the same scenes in George Stevens's The Greatest Story Ever Told (1965), and comparing Hunter's performance to Max von Sydow's vastly superior one. The lines are the same but von Sydow speaks with quiet authority and with his apostles in a conversational, warm style lacking in Hunter's portrayal. Scenes like the Sermon on the Mount work as spectacle but not as drama because Hunter just isn't all that persuasive an orator.

The only real star in the cast is Robert Ryan, always an underrated actor, who is very good in unexpected ways as John the Baptist, and gives the film its emotional core right when it needs it. Then again, his captivating performance only underscores Hunter's uninteresting one.

The film isn't on the scale of Bronston's later gargantuan productions - 55 Days at Peking, Circus World, The Fall of the Roman Empire - but its sets and scale are undeniably impressive. Looking at it on Blu-ray, at sets and scores of extras so obviously not CGI, one wishes such types of films were still possible.

Timeless is the best way to describe King of Kings. It looks brand new yet is more than 50 years old. The sharpness, the richness of the color (especially primary blues and reds) is amazing. It's really a terrible shame Bronston's later films don't survive in this pristine condition. The marvelous audio, with its fully directional dialogue and epic score by Miklós Rózsa, is a joy remixed for DTS-HD 5.1. A French mono track is also included, along with subtitles in English, French, and Spanish.

The only extras are carryovers from the standard-def DVD, regrettably not remastered for high-definition. Included is the vintage featurette, "The Camera's Window of the World," newsreel excerpts, and a trailer.

Pleasant and tasteful though far from the best of the great Biblical epics of the 1950s and '60s, King of Kings is a beauty on Blu-ray, its visual awesomeness overcoming the picture's dramatic shortcomings. Highly Recommended.