Shout Factory // Unrated // March 15, 2011
List Price: $19.93 [Buy now and save at Amazon]
Review by Stuart Galbraith IV | posted March 7, 2011 | E-mail the Author
Shout! Factory's final DVD of monster movies from Japan starring fire-breathing extra-terrestrial turtle Gamera is a double-bill of the last two films of the (original) eight-film series: Gamera vs. Zigra (1971) and Gamera: The Super Monster (1980). Though easily the worst of the bunch they're not without interest, especially when one takes into account their relative unavailability. For many years they were by far the most difficult Gamera movies to see.

The first seven films were on television for decades, most syndicated to local television stations by AIP-TV, American International Pictures' television division. However, Gamera vs. Zigra (Gamera tai shinkai kaijū Jigura, or "Gamera vs. the Deep-Sea Monster Zigra) wasn't part of that package. It didn't turn up in America until it and all the earlier entries were reissued to TV and released for the first time to home video in their infamously awful "Sandy Frank" versions. Among many other problems they featured absolutely atrocious English dubbing, replacing the vastly superior AIP dubs. These Sandy Frank versions made the movies seem far worse than they actually were, and it was these versions that ended up getting trashed on shows like Mystery Science Theater 3000.

Gamera: The Super Monster (Uchu kaiju Gamera, or "Space Monster Gamera," known previously as both Gamera Super Monster and, simply, Super Monster) was even more obscure; until now it had never been released to home video in the United States at all and was only very rarely was shown on American television. Although all of the classic Gamera titles were eventually released in their original widescreen, Japanese-language versions on VHS in America, and even with English subtitles on DVD in their native Japan, for some reason Japanese DVDs of Gamera: The Super Monster never included English subtitles.

So here they are at last. Given the extremely niche market for movies like this, it's understandable that Shout! had to double-up on these later entries, in this case forced to stick two 90-minute movies onto a single-sided, dual layer disc. This precluded more extensive special features and, with the reduced bit-rate, the transfers suffer even though they're sourced from "newly restored anamorphic widescreen" masters. Still, these are vast improvements over what fans of Japanese monster movies had to contend with 35 years ago. 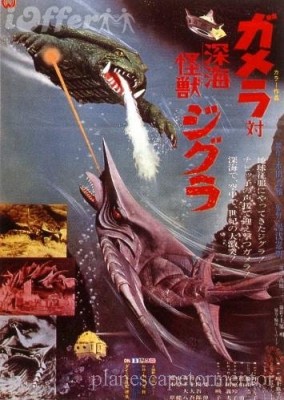 That Gamera vs. Zigra and Gamera: The Super Monster were made at all was an achievement of sorts. Daiei Motion Picture Co., Ltd., the Tokyo- and Kyoto-based film company behind the Gamera series, was in dire straits in 1971. Series director Noriaki Yuasa once told me that while Gamera vs. Barugon (1966), the second and most expensive film of the series, cost about 80 million yen (about $225,000), Gamera vs. Zigra was made for just 35 million yen, or about $97,000. And probably a good chunk of that came from Kamogawa Sea World, a tourist attraction prominently featured in the story. The film almost plays like an advertisement for that (still extant) tourist attraction and, tellingly, neither Gamera nor Zigra end up thrashing it. Soon after the film was finished, Daiei went bankrupt and along with the studio's other final films Gamera vs. Zigra was released not by Daiei but rather a company called Dainichi Eihai.

The story is business as usual. Space monster Zigra attacks a moon base before heading to Kamogawa, Chiba, near Tokyo. At the Kamogawa Sea World, Kenichi (Yasushi Sakagami) and his playmate Helen (Arlene Zoellner) reside with their families at employee housing inside the park. The kids join their scientist fathers, Dr. Yosuke Ishikawa (Isamu Saeki) and Dr. Tom Wallace (Koji Fujiyama, in whiteface?), as they investigate the polluted waters nearby (for all its faults, the picture has a prescient environmental conservation theme). When Zigra's crown-like spaceship lands in the ocean nearby, the foursome and their little outboard-motorboat are transported aboard the spacecraft.

There, sexy "Woman X" (Eiko Yanami), representing Zigra's interests - the shark-like monster lurks from the ceiling above, hiding behind some cobwebs - announces its plan to conquer Earth, to live in its seas, and in a reversal of man harvesting seafood, intends to extract human beings from land as a source for food. As a demonstration of power, Zigra triggers a massive earthquake in Tokyo, the aftereffects glimpsed on a big monitor (in the original Japanese trailer, a bit of the actual earthquake is shown). The fathers are outraged but mostly stand around and do nothing. Instead, it's the two kids that spring into action.

With Gamera's help, the children escape back to Sea World with Woman X - in fact a scientist from the moonbase abducted and possessed by Zigra. She's not-so-hot on their trail. Meanwhile, scientists try to revive the two dads, now in a catatonic trance; in a very funny scene a scientist screams, "AHHHHH!" into a walkie-talkie to lure them back into consciousness. Meanwhile Gamera, seriously wounded after his first battle with Zigra, recovers off the shores of Kamogawa.

Films like this are easy targets, especially in their ludicrously dubbed versions, but to criticize Gamera vs. Zigra for not measuring up against, say, King Kong (1933) or even the original Godzilla (1954), is missing entirely the aim of this and most of the other Gamera entries. Director Yuasa and screenwriter Nisan Takahashi deliberately wrote them from a child's perspective and for an audience of children. Except for Gamera vs. Barugon (1966), notably the one entry not directed by Yuasa (he supervised the special effects in that one), children are at the center of things. In the early films it was a solitary, lonely and pudgy little boy, probably based on Yuasa himself, while later, as the films found an international audience, usually a happy-go-lucky and very typical Japanese boy was paired with a plucky American (though Japanese-speaking) playmate. In this film Helen's national identity is firmly established when she blurts out, "I want a Coke!"

In the original Japanese version, their real voices are heard on the soundtrack and their performances, while hardly polished, are quite charming and more akin to Hal Roach's Our Gang / Little Rascals shorts. In the English version, however, what sounds like adult women speaking in squeaky voices do the dubbing. Even though the dialogue is pretty much the same, the effect is jarringly unreal. In the Japanese version the kids are fairly adorable while in the Sandy Frank dubbed version they're like fingernails on a chalkboard.

The film itself is not without deliberate humor. Toward the end, when Gamera finally gets the upper flipper on Zigra, the turtle grabs a hammer-shaped boulder and plays a bit of Gamera's theme song on Zigra's multi-finned torso like a xylophone. In another very funny scene, Zigra is napping underwater (in what may be a genre first, the monster snores) when Gamera sneaks up, curiously using the two kids and their dads (aboard a bathysphere) as human shields. Like a girl Gamera meekly tosses a boulder at Zigra, then rescues the bathysphere and its occupants as if stealing an apple. 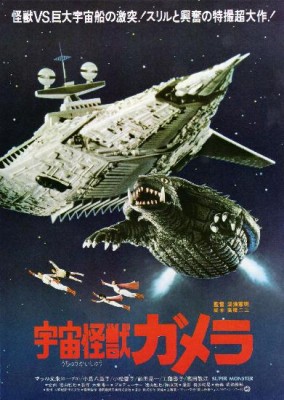 By 1980, Daiei's assets were in the hands of Tokuma Shoten, a powerful publishing conglomerate that decided to release Gamera: The Space Monster, a That's Entertainment!-type feature of highlights from the various Gamera films. Yuasa and Takahashi were brought in, and they convinced the company to let them build a new story around all the stock scenes. The results are miserably bad, yet like Zigra that the film exists at all was something of an achievement and it has a kind of bizarre, somnambulistic charm.

Gamera himself shows up in the nick of time. For reasons unclear, Keiichi is convinced that his own pet turtle, a gift from Kilara that Keiichi released back into the wild, has somehow transformed into the flaming Frisbee from outer space.

Needless to say, all the monster battles are culled from the earlier movies, including some scenes featuring human actors driving 1960s automobiles wearing 1960s-era suits and ties. The new effects consist of the alien spacecraft flying through space and shooting the occasional laser beam at earth; a few tight close-ups of Gamera's head, and wider shots of him flying; and Superman-type flying scenes with the alien women, who can also shrink themselves to about a foot high. Unfortunately, all of this was shot on analog video rather than 35mm film, and its impact is less like the earlier Gamera movies than a Sid & Marty Krofft Saturday morning kids show. Even the opening and closing titles are video-generated. The alien women also change back and forth between their revealing, leotard-like alien wear and human alter-ego wardrobe. This is done rather well, via straight jump cuts on film.

The movie is nothing if not peculiar. For one thing it tries to have it both ways, with Gamera and the other monsters a real threat to Earth (or, at least, Japan) while in other scenes Keiichi's mother (Toshie Takada), totally oblivious to all the disasters happening around Japan, scolds her boy and his wild imagination. In yet other scenes, Keiichi's clearly is dreaming. In those scenes Gamera interacts, though not very much, with stock footage from two popular animated features, Space Cruiser Yamato (1977) and Galaxy Express 999 (1979).

Kilara, with her short, slicked-back hair and masculine, vaguely lesbian manner to Western world eyes (for the Japanese she's more like the otokoyaku, the male impersonators in Japan's all-girl Takarazuka Revue) makes an unusual though striking super heroine, and Fumiake is an appealing presence. She later turns up in Juzo Itami's A Taxing Woman and its sequel.

(Spoilers): The film ends on a surprisingly somber note, with Gamera selflessly sacrificing himself to save mankind and Kilara trying to cheer a genuinely traumatized Keiichi by flying him around the world, a la Peter Pan. It's an oddly elegiac conclusion to the original Gamera series (revived, with an entirely different approach, in 1995), a reflection of the sorry state of the genre in 1980.

Though presented in its original 2.35:1 Daieiscope aspect ratio with a 16:9 enhanced widescreen transfer, Gamera vs. Zigra looks awfully weak with a distracting amount of combing. I pulled my much older Region 2 DVD from Toshiba in Japan and found the image is significantly better: sharper, brighter, and with more vivid color. The same held true for Gamera: The Super Monster, also enhanced, though the combing was less eye-straining because the image, at 1.78:1 (approximating its original 1.85:1 release), is larger with more picture information. Viewers have the option to watch the films with English dubbing or in their original Japanese with English subtitles, rather substantially paraphrased in the case of Super Monster.

Supplements include a modest but interesting collection of publicity stills and, in the case of Zigra, behind-the-scenes photos. Kudos to whomever designed the menu screens, which are lively and fun.

Neither is a lost classic, yet both films should please fans of films of this type and are mildly recommended, despite the distracting combing problems.


* I was surprised to see it acknowledged in the end credits. Pet Shop Mon Tou Tou is a real place and you can visit it the next time you're in Tokyo.