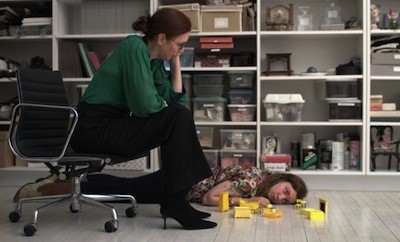 Aura just graduated from college, getting a film degree and a YouTube video of herself frolicking in a bikini in the school fountain to go with it. Her name is ironic, because though it conjures hippy-dippy images of love and happiness, Aura is more like a plague of whining. The movie Tiny Furniture is the story of what she does immediately after school. The grad returns to her home in Tribeca to sponge off her artist mother, squabble with her little sister, reconnect with old friends, and chase after the wrong men. She also gets a job, but the subject of her future is something she's actively avoiding. I don't think she ever says she doesn't know what she wants to do, it's more that she doesn't want to think about it.

Engaging with the disengaged can be tough sometimes. So it is with Tiny Furniture. There is clearly ambition on display here: not for nothing, Lena Dunham has it together enough to assemble a whole movie. This is Dunham's first feature, and she wrote, directed, and starred in the thing, shooting it on a miniscule budget in her mother's real apartment, and roping her real-life mother and sister--Laurie Simmons and Grace Dunham--into putting up with her on the screen. One can't presume to say that this movie is autobiographical, but it is a little surprising that, given the opportunity to dream up an imaginary life for herself, Lena Dunham went for such an uninteresting one. 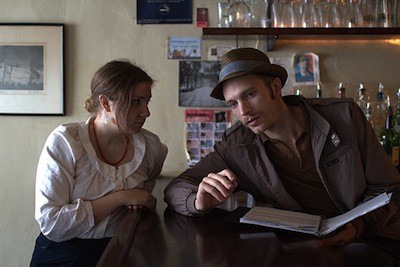 Two of the best scenes in Tiny Furniture actually come as a result of these sorta hook-ups. Midway through the movie, Dunham gives herself actual conversations with both men, where the poses fall away and people actually talk to one another rather than work their way around the mealy-mouthed punchlines that otherwise serve as humor. In terms of comedy, there isn't much that made me chuckle here. The script is like a Noah Baumbach rough draft, the outline of jokes the writer might make before he does the soul searching to give his quips meaning. The only real laughs come from Aura's best friend Charlotte (Jemima Kirke), a spoiled rich girl who has transformed her malaise into withering scorn that somehow becomes more comical by being delivered in a fake British accent. The rest of the laughter comes from the horror of how sad this all really is--and not in a good "laughing with you" satirical way, either. By the time we get to a terrible and awkward sex scene that serves as the film's climax (pun not intended by me, but possibly intended by the filmmaker), it would seem that the nausea and disgust is intentional. The boredom, however...?

In terms of filmmaking, Dunham and cinematographer Jody Lee Lipes don't do a bad job. Though Tiny Furniture is light on planned aesthetics, there are occasional inspired set-ups. The pair make good use of the large apartment Aura's family lives in, shooting through doorways and using walls as natural dividers. In one shot, Aura is laying on the couch while her overachieving sister, who towers over her in accomplishment and stature, is only visible as a pair of legs on a treadmill. It makes for a good contrast. The rest of the film is mostly static, though it thankfully avoids the shaky-cam we have come to expect from most mumblecore features--"mumblecore" being the almost-genre Tiny Furniture most closely resembles. The performances here fit that movement, with all the actors under-acting in an attempt to appear "real." It doesn't work for Dunham or her cast. This feels like a production that never got out of rehearsals.

Tiny Furniture does end on a positive note. The last scene, following the bad sex, features the first real communication of the film. Aura and her mother stop bickering and actually talk, and connections are made between the generations that suggest that Aura's predicament is not only normal, but that things will get better. The insight is maybe too little, too late, but it gives me hope that maybe Lena Dunham could eventually figure this whole cinema thing out, too. 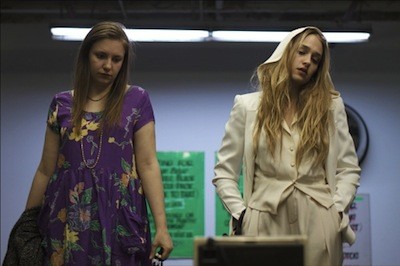 Because for as much as I didn't enjoy Tiny Furniture, there is small part of me that doesn't want to outright hate it. I know plenty of others haven't, the film came to me with some high recommendations--a SXSW win, raves from Salon, the Village Voice, and Roger Ebert--so it's possible it's just not for me. It's fine for characters to be aimless, annoying, or even unlikable, as long as there is something compelling about them that makes you want to keep watching what they do. Such is not the case here. If I am being honest, were I to end up at a party with all of the characters from Tiny Furniture, I wouldn't stick around, not even to just stand in the corner drinking free booze and talking smack about them. Which is also exactly how I feel writing this review. Can't my words be better spent elsewhere? Let these folks do their thing, far be it from me to break up the shindig. I'll just clear off and go do mine.