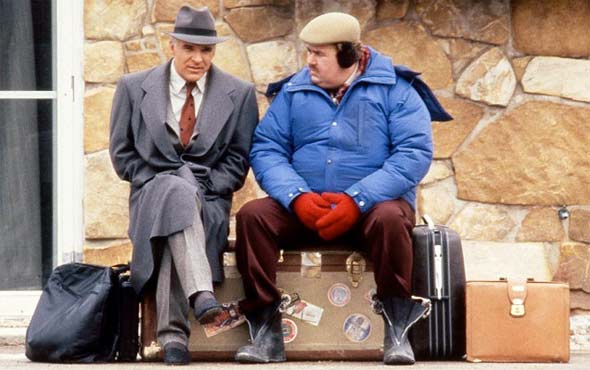 Planes, Trains and Automobiles would probably be titled Trouble in Turkeyland or Travel Buddies if it were released today. It would be chopped up beyond recognition, too, its sleek 92 minutes hacked to 78, cutting out the character bits and leaving only the punchier set pieces and sight gags. John Hughes, like a lot of other filmmakers who specialized in comedy during the 1980s, knew how to explore a varied range of comic tones in crafting a full-bodied movie that went well beyond the one-note comedies that are par for the course. Hughes took comedy sub-genres such as the teen film, the buddy movie, the family comedy, and the road film, and boosted these flattened-out, cliché-bound stories with robust characters capable of generating believably absurd cinematic situations. Planes, Trains and Automobiles displays Hughes' powers at their height, as well as Steve Martin and John Candy in two of their very best roles.

Steve Martin is uptight marketing executive Neal Page, delayed in New York due to a long meeting with a client that leaves him struggling to make a flight from LaGuardia to Chicago. But it's the week of Thanksgiving, and his travel plans take several unexpected turns, all of which find Page reluctantly throwing in with shower curtain ring salesman Del Griffith (John Candy). Griffith is gregarious and even obnoxious; the personality conflict fuels a host of comic situations. Page just wants to make it home for Thanksgiving, and Griffith's unrepentantly cheery outlook doesn't help matters, even though Griffith often proves resourceful.

Hughes uses his perfectly-cast leads to generate a string of outrageous situations that, despite their comic ferocity, never lose sight of who these two guys are and of what each of them is after: Page just wants to be reunited with his family, while Griffith is perfectly content to spend a few unplanned days with a stranger he would desperately like to call a friend. As a successful executive and family man, Page doesn't need friends; he just wants to go home. This tension remains understated but understood throughout the film, building to a bittersweet twist ending.

But the film succeeds and remains a classic because of its characters and the set pieces that emerge from their personalities. From the opening footrace down Madison Avenue between Page and an unbilled Kevin Bacon, to Page and Griffith's first night in a motel, to the highway sequence that ends with their rental car aflame, Hughes and his stars construct a very funny and very fast travelogue of disaster. Martin is unafraid to be flat-out unlikable as the uptight Page, and Candy sports a curly-haired 'do and a penchant for bow ties as the slovenly Griffith. Despite their differing negative qualities - which are the qualities that drive a wedge between the two characters - we care a lot about these guys, and both actors perform their deceptively simple roles with admirable care.

Image and Sound
This DVD release is not new. Nonetheless, DVD Talk received a copy of the DVD that was released about a year ago. The technical presentation (16:9 transfer, 5.1 surround) is very good. The crisp image looks almost brand new, and the very active soundtrack showcases excellent effects work and Hughes' strong musical sensibility. (The score is by regular Hughes and John Landis collaborator Ira Newborn.)

Bonus Content
The extras are a little disappointing in their brevity. Three featurettes and a single deleted scene run under 30 minutes all told. Although some of the vintage footage in the featurettes is interesting, it's too bad more work wasn't put into making this second DVD release truly special. The film deserves deluxe treatment.

Planes, Trains and Automobiles is a classic character-driven comedy that has aged well due to the timelessness of Hughes' approach - one that favors personality and situation over cheap gags and topical references. An excellent technical presentation is undermined by a regrettable lack of substantive extras. Although the movie itself is a near-perfect comedy, this DVD only merits a high recommendation.