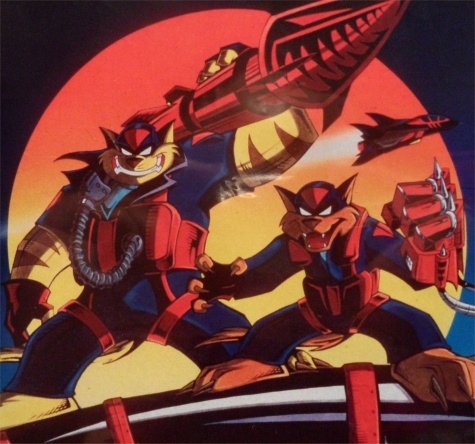 Buried by more popular fare like Animaniacs, Tiny Toons, Ren & Stimpy and Batman: The Animated Series, Christian and Yvon Tremblay's Swat Kats may not be familiar to all but the most ardent fans of early 1990's animation. Premiering in 1993 and running for just 26 episodes, this comedy/action hybrid featured a strong visual style and a talented roster of voice actors...but, of course, it never caught on. Luckily, Warner Bros. Archives has once again stepped up to the plate for this five-disc "Complete Series" collection, ensuring that those clinging to VHS compilations can finally get their hands on a modest upgrade.

Swat Kats really doesn't bring anything new to the table...but, more often than not, it plays its cards right. The Swat Kats are better known as Chance "T-Bone" Furlong and Jake "Razor" Clawson (at top), two anthropomorphic cats who work as mechanics in Megakat City. Although Chance and Jake have a background in law enforcement, they were fired from their positions and no longer fight crime "officially". Luckily for them, their mechanic jobs ensure that plenty of useful junk is always laying around---and before long, they've got a respectable cache of makeshift gadgets that they use to battle criminals on the side. Their enemies are often "villains-of-the-week", but a rotating cast of regulars are also on hand to make trouble. The Swat Kats' small group of friends, on the other hand, are mainly limited to Calico "Callie" Briggs (think April O'Neil) and Lieutenant Felina Feral, the niece of Chance and Jake's former boss. Episodes are light-hearted and action-packed, even though the constant cat puns get old quickly.

Although Swat Kats did enjoy a respectable amount of success during its brief lifespan (even spawning an action figure line, a few promotional tie-ins and a video game for the SNES), the series was cancelled in 1995. Hanna Barbera's shift towards producing original shows for the fledgling Cartoon Network may have been one reason, or simply that the show's decent numbers weren't quite decent enough. In any case, a total of 26 episodes were produced and aired during 1993-1995, and they're all accounted for on this five-disc collection. Most semi-obscure shows have yet to be released on DVD, and some may never see the light of day...so any way you slice it, Swat Kats: The Complete Series is a welcome release by Warner Bros. Though the format of this collection leaves a bit to be desired (see below), die-hard fans of the series shouldn't have any problem shelling out for this release. Unfortunately, those who don't have vividly nostalgic memories of Swat Kats may find themselves stuck on the fence; especially since Warner Archive titles like these aren't available to rent. How about a download-on-demand program where casual fans can just pick a few episodes?

NOTE: As mentioned on the packaging, this five-disc release is a "burn-on-demand" title and, unfortunately, will not play in many DVD-ROM drives and recorders (hence the lack of screen captures). Of course, this may affect whether or not you choose to purchase this title, but most stand-alone players should load these discs with no problem.

Presented in their original 1.33:1 aspect ratios, these 26 episodes don't look half bad. The color palette is dull at times and image detail tends to run a bit soft, but most episodes appear to be fairly clean and clear overall. Mild interlacing can be spotted at times, though it's generally kept to a minimum. Fans will be thrilled to finally have this series in decent condition---and though this isn't a perfect picture, it still looks as good (or better) than most lower-profile animated shows from the early 1990s. It's also worth noting that these episodes were taken from the best masters possible, but have not been remastered for this DVD release.

Likewise, the audio presentation is somewhat basic but manages to get the job done. These episodes are paired with their original Dolby Digital 2.0 Stereo mixes and feature relatively crisp dialogue and music cues. Unfortunately, no optional Closed Captions or subtitles have been included with these episodes, which is always a disappointment.

The menu design and packaging show a minimal effort; on all counts, we get the basics and nothing more. The navigation consists of static, straight-outta-1997 screens...but hey, at least they're easy to use. Each 22-minute episode has been divided into just two chapters, while no obvious layer changes were detected during playback. This five-disc collection is housed in a clear, multi-hubbed keepcase; if nothing else, it's practical and more damage resistant than a digipak.

Bonus Features
We barely even get menu screens, so of course no bonus features are on board. A short documentary or a few vintage TV spots would've been nice, but at least the series proper is accounted for. Die-hard fans are most likely aware of several episodes that were never completed upon the series' cancellation; sadly, no mention of this material can be found anywhere.
Final Thoughts

Relatively popular during its short lifespan, Swat Kats has aged fairly well for a mid-90s animated series. The show's even mix of comedy and action is usually balanced fairly well, even though the characters and situations aren't exactly groundbreaking on any level. Warner Bros.' five-disc release will satisfy and frustrate fans in equal measures; although all 26 finished episodes are on board, that's basically all we get for roughly $35. Die-hard fans probably won't mind grabbing this one, but everyone else should do some more research (read: YouTube clips) before they make a decision. Let's split the difference and call this one "Mildly Recommended".