Gantz is a highly successful series that began as a Manga (i.e. a 'Japanese comic', for those of you who are not familiar with the term) created by Hiroya Oku. It then went on to become a cult favorite anime series that has a dedicated fan-base within the United States. Undoubtedly, the producers were intent upon reaching out to that overseas audience, and a special world premiere was held in movie theaters across the US for a live action Japanese Gantz film on Thursday, January 20th, 2011.  This review is for those interested in the quality of the film itself, as well as the presentation it received as a LIVE EVENT (which included a Q&A session after the film premiere). 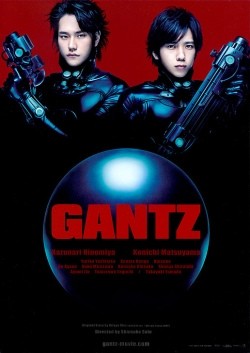 Gantz has a rather bizarre storyline: Characters that appear to have died from one method or another appear moments later in a room with a giant black ball named (you guessed it!): Gantz. These characters have apparently been given a chance to live again by participating in a fight against a variety of supposed baddies from outer-space. The problem with the storyline being presented is that if these characters die while battling they die completely. No more second chances at living after losing all life during a Gantz battle!  However, if you can beat a round (which usually lasts for twenty minutes for some whacked-out reason) you might be able to win some cool points that just might be redeemable for something pretty, well, nifty: a complete return to your normal life or a chance to bring back someone who has died.

On the subject of living or dying, Health is also completely returned to normal when you are zapped back magically to the weird room with the Gantz ball.  Just remember that if you want to get enough points for a prize you pretty much have to learn to become a killer first. That can be a tough selling point. What exactly are the morals of these characters anyway?! They are never given a real explanation as to why they should kill the alien 'baddies' and they do their killin' anyway despite this drawback (usually as the instigators of a fight too).  This is an observation worth being made about the film.

If you are a fan of the Gantz manga or anime you will probably find some aspects of this version to be both disappointing and entertaining. Certain plot points are faithfully reproduced (the 'green onion' alien episode plays a huge role in the film) while other moments are tinkered with beyond recognition.  Unlike the anime (which seemed to suggest that morals play a huge role in the overall story), this film does not touch on the issue of killing in much negative light. The story doesn't focus on the overall importance of the actions made by these characters. I feel like the anime makes viewers genuinely feel as though the story is somehow about the evil within people and how far certain individuals might be willing to go to screw over one another, so that there are moral obliterations for everyone. None of that dark, nasty, scathing vibe is to be found here... for better or for worse. I'm guessing any real fan will be pretty upset over this crucial underlying difference to some degree.
seemed to be more faithfully reproduced for this adaptation though their backgrounds are not entirely the same as what some might be expecting.

I think that a lot of fans are going to debate this film, if only because on some level it is a merely average production. It features cheesy special effects galore that will definitely not compare to giant Hollywood productions.  They are passably decent but never fully engrossing or convincing.  On the plus side, the costumes, locations, and sets were pretty impressive and reminded me quite a bit of what we found in the anime. At least those aspects were highly enjoyable to see as fully realized aspects of this incarnation. I must admit to also being surprised by the performances and direction (by Shinsuke Sato).  My expectations were met and surpassed in those areas. You won't find Oscar quality material here, but given the type of film this is just keep expectations in check and it's going to be a pretty good time out at the movies. There's a lot of creative camerawork and the actors know how to keep you entertained even when the story doesn't seem to understand what is and isn't working.  Music lovers will also notice the excellent new score by the now legendary composer Kenji Kawaii, which was certainly a highlight that brought some added depth when it was needed. 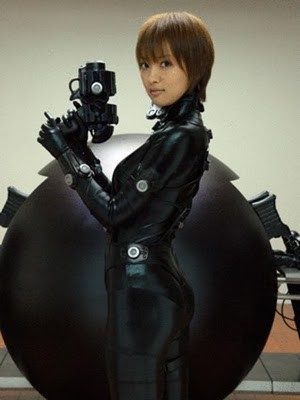 For the record: Fans of gratuitousness are bound to be at least somewhat irritated. The action and sex is heavily toned down. Some will call this censorship; others will say it's unfaithfulness to the source material, and many more will insist it was simply done as a way to sell more movie tickets to teenagers. Alas, it's undoubtedly a combination of all these things. Though the violence is still pretty extreme in certain scenes (I certainly wouldn't dare to call the stuff shown as 'tame') it doesn't come close to what was found in the anime series. As for sexual content: this time it is practically non-existent, though you do get a few good lingering shots of a well-groomed cast (and these moments will likely appeal to either gender or orientation).  There is no explicit nudity to be found anywhere though - don't get your hopes up if you're a perv like the original Kei was.

Last but not least, Gantz has a slightly misleading title. It's only the first of two live-action releases planned for 2011 (the second of which will arrive in the winter).  The movie feels complete but never seems to work as a whole. When the film ends you will likely want to immediately watch the second part (if you enjoyed the first). That may or may not be a good thing for some viewers. As it stands right now, I am unsure if some of the issues I had with the conclusion resulted from the story being split into two separate parts or if it just means the story feels inherently flawed from its inception.  It may simply be the failings of this live action adaptation. 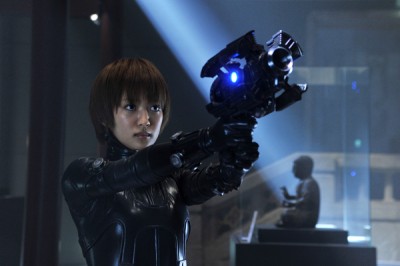 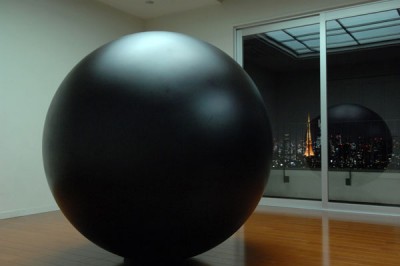 While genuine devotees are exactly the kind of people I expect to have viewed this film already with the world premiere, I may be a rare exception to that rule (I had yet to finish the series by the time I entered a darkened theater).  Those unfamiliar with past versions of Gantz may have few if any major qualms with the film. Those who are familiar but not diehard fans may react similarly to me. Should viewers be prepared to give the film a proper chance upon its inevitable home media release? I would say so. The movie is never boring and it's actually a lot of fun if viewed with a certain mindset. However, if you are a huge Gantz fan and expect a totally faithful adaptation I can only reinforce now that your dreams of a perfect live action adaptation will be crushed upon seeing the end results. It is not entirely faithful, nor is it entirely perfect. But it is fun. As long as you can accept that simple fact you might have a good time. This live action incarnation truly represents an entertaining if slightly mixed bag of sci-fi goodness for genre devotees. 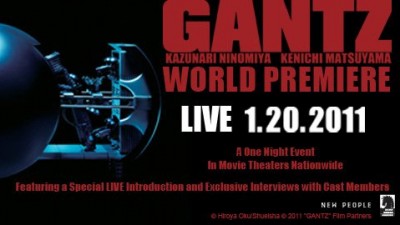 In addition to the film itself the world premiere event was also a decidedly mixed affair.

The idea behind the event itself was pure gold. I'd be lying if I said I didn't appreciate the opportunity to see a Japanese film at around the same time it opens wide in Japan (actually, we got to see it earlier: Gantz was screened on January 20th, 2011 and will open wide in Japan on January 29th, 2011) . I'd be willing to wager that the people who attended this film premiere would also be willing to see other foreign films this way (even if they are unrelated to an anime series). I seriously hope and desire to see more films receive this kind of release and will cross my fingers that this is only the start to a wonderful new way of global film inter-connectivity to come in the near future.

Note to Funimation:  You might want to consider the possibility of partnering with Fathom for similar events for anime films. The upcoming releases of Summer Wars and Evangelion 2.22 would be more accessible to anime fans if released through this method of presentation as they would be playing on a greater number of screens across the nation.

The lead actors who participated in the Q&A session (Kenichi Matsuyama and Kazunari Ninomiya) were great sports who seemed happy to answer fan questions. Both men did a good job of entertaining their audience. Kenichi may have given some ridiculously long answers when one considers that his translator had a nearly impossible task of trying to remember everything he was saying, but this was forgivable given the nature of the event. Hopefully more planning will be done prior to the release of the second Gantz film so issues like this won't continue to arise.


Showing the film with an English dub instead of with the original language track and subtitles. No one in the audience I attended the film with seemed to be enjoying this dub, and with good reason. It's a decent dub when compared to other live-action films but it also dramatically decreases the level of enjoyment fans could have had by watching the film as it was meant to be seen. Whoever made the decision to only present the film in a dubbed version made a mistake and hopefully this is corrected with the release of the second Gantz film in North American theaters.  (Note: This dub was not done with the same VA's who worked on the Anime series.)

Having a very uninteresting (and clearly bored) host in charge of the Q&A session following the premiere of the film. Whoever this host was... he absolutely failed to do a good job with keeping an appropriate pace for the presentation. The host also asked some really stupid questions (example: How would you feel if you got nominated for an Oscar for this?), and seemed downright bored and irritated by being the host. If he wasn't interested in participating in this event then why should the fans who paid good money to see this in a movie theater?