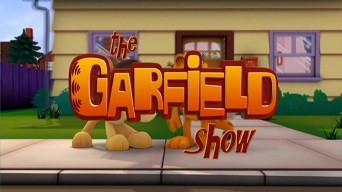 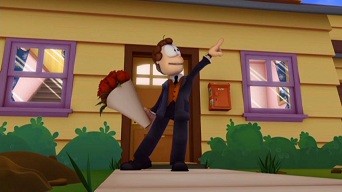 The Garfield Show appears to be the latest incarnation spinoff of this legendary character. It's a breezy, CG-animated production whose episodes run a kids-attention-span-friendly 12 minutes each. The premise of the show heavily reflects the universe established in the long-running comic strip, and in this sense it should please though not necessarily inspire long-time fans. Garfield is as sarcastic as ever, self-absorbed and lazily spending his days in owner Jim's house. Odie, Jim's dog, lives a blissfully dumb existence - and Jim is still awkwardly geeky. Garfield's comments and pranks provide the main thrust of the storylines here, and while they're mainly humorous, they sometimes flirt on the mean-spirited. The first episode on this DVD collection, Pup in the Pound, illustrates this point well, with Garfield deliberately hiding Odie's leash so that the canine will be snatched by dog catchers and thrown in the pound.

Many of the strip's supporting characters make appearances - though they're wisely not jimmied into every episode. This includes Nermal and Liz, Garfield's vet and Jon's love interest. The humor is juvenile and clearly aimed at little kids, like previous Garfield media projects - though there are occasional nods to the adults. One of my favorite sight gags in this collection, for instance, occurs in the episode Odie in Love as Jon, with a dozen roses in hand, dashes off for a date with Liz - breaking a disco move and launching into a John Travolta Saturday Night Fever pose as he does so. Kids would find the character's antics amusing, but it's only us old folks who would get the allusion.

This single-disc collection of The Garfield Show is subtitled Odie-Oh! and sports six 12-minute episodes for a total runtime of 72 minutes. The episodes are Pup in the Pound, Odie in Love, From the Oven, Neighbor Nathan, Up a Tree, and The Amazing Flying Dog. Another DVD volume of the program subtitled All You Need Is Love and Pasta has also been with released with a third - Private-Eye Ventures - due in April. If The Garfield Show follows the home video trend of other animated series like The Spectacular Spider-Man, these single-disc and extras-sparse (more on this in a bit) releases will continue, but a "complete series" set with more extras will ultimately follow.

The Garfield Show isn't some great work of art, but it efficiently delivers cartoon animal fun that little kids would probably enjoy. The animation is a tad rudimentary and clunky at times, but it's good enough to pass muster for cartoon fare of this type. As such, I'd recommend the show. However, unless you need the discs right away, I'd suggest holding off to see if a "complete series" collection materializes down the road. So, I'll go with a "Rent It" recommendation for this volume. 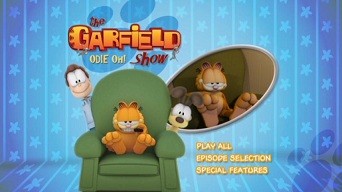 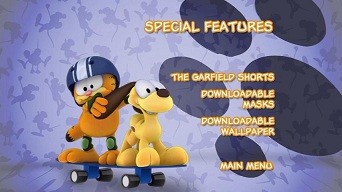 The most significant extras are a series of brief minute-long cartoons called The Garfield Shorts. Think of them as animated versions of weekday newspaper comic strips. Several involve Garfield pulling pranks on the local mailman, but the best of the bunch has Garfield, Odie, and Jon trying to take a picture of themselves with a time-delay camera. The five shorts are Cheesy Letters, Boxer Shorts, Snooze Control, Return to Sender, and Say Cheese. In addition, DVD-Rom downloadable masks and wallpaper art are available. So, the disc has a few extras, but not much of substance.

The Garfield Show: Odie-Oh! provides six breezy 12-minute episodes of the latest CG-animated incarnation of this popular newspaper comic strip fat cat. While it's hardly exemplary children's programming, the cartoon provides enough talking animal antics to keep kids entertained. However, fans of the series may want to wait to see if a "complete series" DVD collection materializes after these individual DVDs have been released. The show itself is recommended, but this 72-minute DVD with sparse extras gets a "Rent It" suggestion.