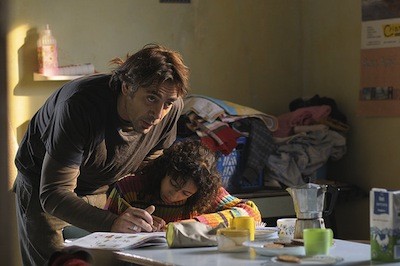 What's to be done with a movie that looks beautiful, dances the dance, and says all the right things, and yet keeps the audience at arm's length, refusing to share its personality or let the viewer into its inner world? Such is the case with Alejandro González Iñárritu's Biutiful, an overlong yet well-meaning stuffed shirt of a motion picture. With its idiotic title (a little girl in the movie misspells the word "beautiful" based on the sound of the English word and traditional Spanish spelling) and its po-faced sincerity, Biutiful is heavy in emotional gusts, slow in execution, and altogether bloated. Some my call it pretentious, too, and that may be fitting. Biutiful pretends to be more than it really is.

Javier Bardem stars in the Spanish-language film as Uxbal, a father of two who is separated from his wife and makes ends meet by running a variety of hustles. He has a deal with the Chinese bootlegger Hai (Taisheng Cheng) to take the fake purses and dubbed movies made in Hai's sweat shop and sell them on the streets through a group of African immigrants. Both the sellers and the makers are in Spain illegally, and so they go with whatever jobs they can get. Uxbal is everyone's go-between. He even takes care of paying off the cops, and he's planning to supply some of the illegals to a construction site looking to cut costs.

Another thing that Uxbal does is go to funerals and communicate with the not-yet-departed spirits of the deceased. He then tells their last message to their surviving loved ones, who pay him a fee for his trouble. This, surprisingly, is not a scam. Uxbal really can speak with the dead, and the spirit world lurks all around him, gathering like mold on his bedroom ceiling. Death and dying is a major theme of Biutiful, since Uxbal has also recently been diagnosed with cancer. He only has a couple of months to provide for his kids and clean up the mess he made in the world.

Biutiful is written by Iñárritu and two other writers. Regardless of that pair's contributions, this is obviously an Iñárritu production. It has the same elliptical structure and pedantry as his other films, though it has more in common with the dreadful Babel than it does his earlier successes, Amores Perros and 21 Grams. Though he has thankfully abandoned his "butterfly effect" global concerns this time around, the main thing Iñárritu still needs in his production team is a merciless editor to ride his ass during the script stage. Biutiful lacks narrative focus, and the excessive 147-minute running time has as much to do with unnecessary digressions into the lives of side characters as it does his sluggish pacing. Biutiful is essentially a movie about a man in mourning for himself, and it is rife with all the self-indulgence and self-pity such a prospect suggests. It's enough for any one movie, but Iñárritu also makes room for a pointless subplot about Hai's secret homosexuality and one of the African men (Cheikh Ndiaye) being deported. While how Xbal deals with these associates may be important, the scenes without Xbal are not. Cut them and move on. 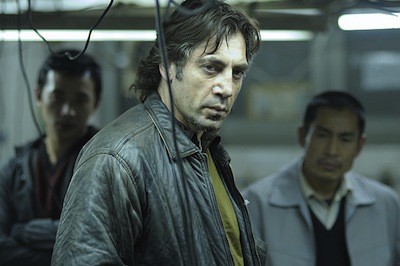 Because it's really Xbal we should be dedicating our attention to. If anything makes Biutiful bearable, it's Javier Bardem, who approaches the material with the same intense dedication as his director, but with more concern for the heart and soul that drives his character. Xbal is a conflicted man. He clearly exploits people who are in a desperate situation, but he insists he is only helping them, and if not him, then someone else will come along to take his cut. Sure, there is some hypocrisy, but he does seem to genuinely want to do right by the workers, even when his attempts to do so go horribly wrong. He also struggles to be a good father, despite his anger often getting the better of him. Perhaps smartly, he isn't as concerned about being a good husband. His estranged wife (Maricel Álvarez) suffers from bipolar disorder, and attempts to reconcile with her end in the extreme nuttiness one would expect in these kinds of movies.

One would think that there is rich material to be mined from the story of a man who can't help those closest to him, but yet can somehow ease the dead from this world into the next (a subject we've already seen in recent months, namely in Clint Eastwood's Hereafter, which is equally as awful). Again, one would think that, but Iñárritu does very little to connect this aspect of his screenplay to the rest of his storylines. This seemingly important character detail is treated as a minor plot point, and the gaps between it being mentioned are so large, it's easy to forget Xbal is clairvoyant. I think there were more scenes of men trying to get out of receiving blow jobs than there were of Javier Bardem communing with the departed.

I guess I am not surprised that Iñárritu has gotten overly stuffy and far too touchy-feely, his movies have been moving that way from day one. What surprised me most about Biutiful is how his previously flawless technique is starting to fail him. Though his regular cinematographer Rodrigo Prieto, who has also shot some fantastic Ang Lee movies, still delivers a film that is wonderful to look at, transforming the slums of Spain into painterly backgrounds for the characters to emote against, not much else in how the movie is put together works. Stephen Mirrione, whose previous editing credits have been on much slicker motion pictures, is the wrong choice here, the film is cut too slovenly. Worse is the employment of Gustavo Santaolalla's music. The score is disjointed and overwrought, particularly as Santaolalla and Iñárritu start to manipulate it to force the mood. The warbly distortion used to accompany Xbal's breakdown serves as an unneeded highlight, undermining what Bardem is doing rather than enhancing it. Once upon a time, Alejandro González Iñárritu was a director who appeared perfectly in control of his medium--indeed, he pulled off similar audio trickery in Amores Perros--but now he seems too impressed with his own abilities to care how the film threads through the projector.

Biutiful is an endurance test. It goes on and on and on, demanding the audience slog through, but offering little to inspire us to carry on. There is no upward trajectory, no peaks and valleys of hope and despair, it's just swampy flatland all the way. I found watching it to grow increasingly excruciating, so much so that I had my jacket on minutes before the closing credits, just so I could bolt the second the screen went black. If Biutiful is really indicative of what dying is like, then please, let's all live forever.