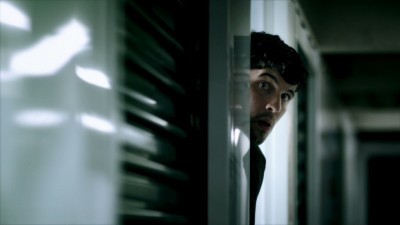 Aaron Katz's Cold Weather is an unassuming little gem of a movie, deceptively simple, instantly relatable. Katz is frequently lumped in with the "mumblecore" movement, and while he shares their DIY spirit, his films are in a different kind of style; yes, he'll play scenes in a minor key, and he's not adverse to a handheld camera, but here (as in his previous film, the wonderful Quiet City) the look is deliberate, the visual choices carefully considered. And it's at the service of a story that is surprisingly sly.

The setting is Portland. Doug (Cris Lankenau) has dropped out of school in Chicago and is living with his sister Gail (Trieste Kelly Dunn). He is remarkably low on ambition, even for a drop-out; he's the kind of guy who will show up at his sister's office and demand that she leave immediately to go to the coast with him--"It's whale watching week!" (She is ultimately swayed by the fact that he has prepared sandwiches.) Doug ends up getting a job working the night shift at an ice-packing plant; he moves bags of ice all night. He makes a friend there, a guy named Carlos (Raul Castillo) who DJs on the weekends. In a long scene of co-worker conversation (the kind of rambling dialogue you've had with countless colleagues), Doug confesses that he loves Sherlock Holmes novels. As casually as it comes up, it is not an idle piece of information.

Doug has an ex-girlfriend named Rachel (Robyn Rikoon), with whom he is slowly, awkwardly rebuilding a friendship. Carlos kind of likes her too, and invites her to one of his DJ gigs. They seem to really hit it off, so he's surprised and a little worried when she doesn't show up and doesn't answer her phone. Doug thinks he's overreacting, but they decide to go to her motel, and... well, there's where it gets interesting.

The turn from low-key character drama to mystery story is surprising, but not sloppy; they've prepared for it, and it makes narrative sense. More importantly, as few other films have (Manhattan Murder Mystery leaps to mind), Cold Weather feels like an accurate representation of how real people would act, when encountering situations they've read about. As the tale unfolds, the film develops an infectiously likable, Hardy Boys kind of quality. And here's the funny thing about mysteries: no matter what guise it's dressed up in, no matter how post-modern or understated the telling of it might be, a good mystery is inherently compelling. So it goes with this one.

As the DIY filmmakers continue working, and creating new opportunities, the chance to merge their aesthetic and narrative sensibility with traditional genre stories is surely irresistible. The Duplass Brothers have started to venture into this territory, with their horror riff Baghead and its follow-up Cyrus, a broad comedy construct that could have easily been played as loud farce. Their specific, straight-ahead approach has created a more interesting concoction; ditto with Katz.

As in Quiet City, the digital videography is frequently lovely (that extended shot on the bridge near the waterfall is glorious), while performances are believable, if not terribly memorable. That's as it should be; they're just people who stumbled into this story. As a screenwriter, Katz has a wry comic sensibility--the stakeout conversation about Internet dating is marvelous, and he's quite good at the little trick of getting a laugh in an edit ("We're not calling my sister," Doug tells Carlos--and then cut, to them already crashing her date). It's a funny movie, but it's intriguing as well. The climax is genuinely, unironically suspenseful--in fact, you're more invested than usual, because these seem like real people and not indestructible movie stars. And then, just when the film is at risk of getting too conventional, Katz cuts things short, with an odd, off-balance, but strangely perfect final scene. It's just the right note. Cold Weather is an unexpected treasure.