I enjoyed watching Big Love in its first couple of seasons. The show cast some actors who showed some surprising depth as the show evolved over the years. But the creative seams were starting to stretch in the show's third season, and rather than taking a step back to refocus the show and its characters, it would appear the people behind the show doubled down on the implausibility in the fourth season and seemed to seal its fate for its current fifth (and final) season.

For those unfamiliar with the show, Big Love focuses on a marriage between Bill Henrickson (Bill Paxton, Frailty) and his three wives Barb (Jeanne Tripplehorn, Steal This Movie), Nikki (Chloe Sevigny, Zodiac) and Margene (Ginnifer Goodwin, He's Just Not That Into You) and their children. When last we left the Hendricksons in Season Three, Bill was still battling Roman Grant (Harry Dean Stanton, The Good Life) and his son Albie (Matt Ross, Good Night and Good Luck) for control of the Juniper Creek compound, albeit for different motivations (Bill wants to free and help those whose lives are being shattered by the Grants' control, while the Grants want to keep the status quo, though Albie secretly wants to force his father out). Bill had also decided to partner with the native American population to own and operate a casino that would result in a revenue stream that would keep the family in great financial health. But it was his decision to run for State Senator in Utah that was the most surprising, a move that potentially widened the fractures in his relationships with his wives. 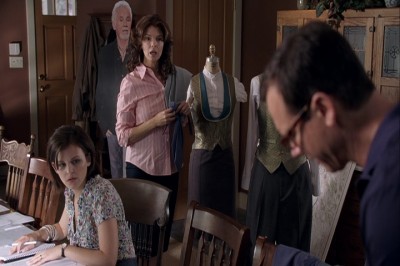 Season Four finds Bill advancing with his campaign, and aside from the person he's running against, his main opposition is Marilyn Densham (Sissy Spacek, The Straight Story), a powerful lobbyist for a possible congressional endorser of the Hendrickson campaign. Marilyn wants to help the casino's interest in Washington but Bill keeps pushing her away for fear of Marilyn finding out about the family. In the casino, the native American business contact is Tommy (Adam Beach, Flags of our Fathers), son of Bill's business partner in the casino and skeptical of Bill's motivations in the business. Nikki's ex-husband from Juniper Creek (played by Zeljko Ivanek, True Blood) appears in her life again and has plans for her and her family on the compound, while Margene continues with her job as an on-air personality for a home shopping network, but suddenly finds herself rebuffing advances from Ben (Douglas Smith, Blast From The Past), who while being only a few years younger than her, remains Bill's oldest son.

Those are the basic storylines that transpire in the season, but one could gather based on them that they're a little grandiose and (in the case of the Ben-Margene subplot) even a little lazy, catering to the "everyone sleeps with everyone else" notion that purveys through many of the more backwards areas of polygamist sects. By doing this, one could infer that perhaps the writers weren't sure of what to do with many of these characters, and by getting two of them involved with one another didn't do them any favors. Additionally, having Barb perhaps dance around a flirtation with Tommy was almost insulting to those who have stuck with the Hendricksons through three seasons wondering what the end game for them would be. But the storyline where Bill had to go to Mexico to rescue his parents and Ben had to be the dumbest. It wrote off a couple of supporting characters needlessly for the sake of, who knows exactly? It was as if the most out of place action sequence came into a dramatic show for no reason whatsoever, other than to do it, but it was symbolic of the bombast with which Season Four of Big Love was going down. 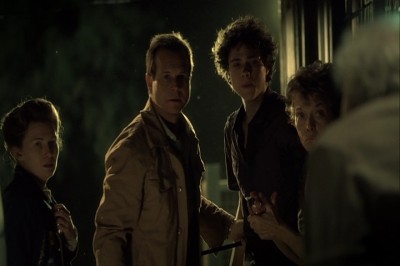 Speaking of which, one thing that has resonated with me recently is that when discussing the excellent AMC show Breaking Bad, the underlying part of the show that many seem to forget is that, as a high school teacher turned crystal meth producer, the main character's destiny seems to be certain; death or jail. With Big Love the sensationalizing of the Hendricksons seemed to be a hard thing to get over creatively, and the show flirted with subplots that would be great on soap operas until finally going for broke on the silliness in Season Four. Sevigny notably said after the season that it was "awful" and that perhaps there were too many ideas crammed into a shortened nine-episode run that perhaps hurt the show in the process.

It's a shame too, because with this cast and the initial surprise of seeing a polygamist family on television, there could have been some amazing episodes with the family (and to be sure, there were through the years), but if anyone who watches Weeds for awhile can tell you, the balance between staying on the diving board and falling into the pool of self-parody is tough and when you fall in as Big Love has apparently done, you can't go back. 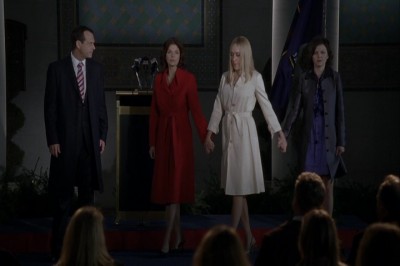 
All nine episodes in the fourth season are presented in 1.78:1 anamorphic widescreen. I've been watching Big Love on high-definition when the first run episodes air, but I came away pleasantly surprised by the viewing quality of these standard definition discs. Blacks are solid, the image is natural without little noticeable edge-enhancement or haloing, and the source material is pristine as can be. There's not too much dropoff in any HD to SD translation, and the show is strong-looking in standard definition as it is.


Dolby Digital 5.1 surround for all episodes. Not reference quality, but pretty strong for dialogue-driven television. Said chatter is clear as a bell and while there's not much in terms of surround or subwoofer activity, it handles any required work clearly and without hesitation. It's a natural-sounding and pleasant sonic experience.


Season Four's run includes a feature called "Inside the Episode" on all the episodes, where creators Mark V. Olsen and Will Scheffer discuss their thoughts and motivations for each installment. They last about two to five minutes in length, depending on episode.


If you took a straw poll among devotees of Big Love, at least four out of every five people will likely point to this season as when the show went from guilty pleasure (with some potential) to flat out silliness. When one looks back at the inevitable series boxed set, HBO would be better off leaving this out of it to preserve a decent image the show had, and those unfamiliar with the show shouldn't start by watching this one. Definitely worth skipping.