Blue Underground // Unrated // May 31, 2011 // Region 0
List Price: $29.98 [Buy now and save at Amazon]
Review by Stuart Galbraith IV | posted June 7, 2011 | E-mail the Author
An Italian-West German-French thriller with American stars, The Cat O' Nine Tails (Il gatto a nove code, 1971) was Dario Argento's second film as director and, for my money, still his best, though a few others are nearly as good. (Ironically, Argento regards it as his least favorite.) Despite several splendid set pieces it's not the visual orgy of later films like Suspiria (1977) and Inferno (1980) but it has a stronger, more richly developed story and interesting characters. The picture is further buttressed by a creepy musical score by Ennio Morricone, a good performance by James Franciscus and an outstanding one by Karl Malden.

The title was first released to DVD in July 2001 by Anchor Bay, and then reissued in September 2007 by Blue Underground. The extra features are the same, with a great international trailer bumped to high-def, but this is still worth the upgrade for Blue Underground's impressive high-def transfer of the uncut 112-minute version. Like the label's The New York Ripper, the sharp, bright, and richly colored image belies the two-perf Techniscope format's limitations (i.e., high-grain). 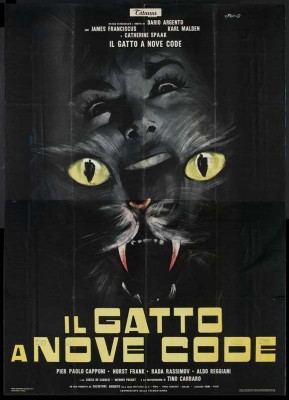 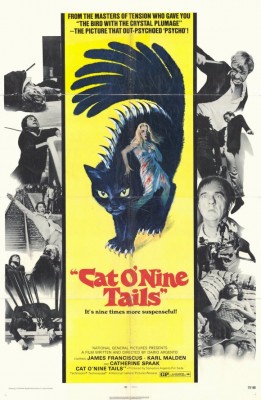 Like many other Italian films vying for worldwide release, here even the Italian actors speak English, with the entire show re-looped in postproduction (Franciscus and Malden provide their own voices), this despite the fact both American actors, as well as French actress Catherine Spaak, all play Italians. Malden is Franco Arno, a former newspaper reporter now the blind caretaker of a beloved, orphaned niece, Lori (Cinzia De Carolis). Walking along the street near his home, Arno overhears a conversation discussing blackmail, and asks Lori to take a mental snapshot of the man. That night he hears someone breaking into the medical research center across the street, during which a night watchman is seriously injured.

Later, Lori recognizes a photograph of the man she saw before in a newspaper story about his death, falling from a station platform and gruesomely splattered by a incoming train. Arno rightly suspects he was pushed, and approaches reporter Carlo Giordani (Franciscus) with his hypothesis. They agree to work together, and soon learn the institute is conducting revolutionary genetics research on XYY chromosomes associated with delinquency and other criminal behavior. (This has since been disproved, but was theorized in the 1960s and, also later disproved, there were published reports that serial murderer Richard Speck was himself XYY.)

Meantime, the murderer steps up his crime spree, brutally strangling and mutilating other members at the institute and, as he becomes aware of their investigation, threatens to kill Arno and Giordani as well.

The 1960-'70s Italian thrillers known as giallo (or, less common but in the plural form, gialli) are often likened to the films of Alfred Hitchcock, and while such comparisons aren't always apt, an Hitchcockian flavor definitely permeates The Cat O' Nine Tails, from the numerous references to puzzles and puzzle-solving, to droll minor characters like the policeman-gourmand, who talks endlessly about his wife's pasta. There's also a very Hitchcockian scene at a barbershop, with Giordani nervously gets a shave while his barber, brandishing a straight razor, bitterly complains that whenever a serial killer is on the loose everyone automatically suspect barbers like himself. "Whatsa matter," he asks a sweating Giordani, "You hot?"

The Cat O' Nine Tails has many outstanding scenes, from the ingenious premise to the set piece on the train platform to a genuinely disquieting, long sequence at a cemetery and mausoleum. All the later murders, in contrast to the gleefully florid approach of Argento's later films, are creepy because the staging is so understated and restrained, almost matter-of-fact. He lets Morricone's unnerving, rather avant-garde scoring do much of the heavy lifting.

Both Franciscus and Malden were coming off hugely successful movies, both for 20th Century-Fox: Franciscus in the popular Beneath the Planet of the Apes and Malden in Patton. Malden especially speaks well of the film and of Argento in the archival radio interview that accompanies the disc. Indeed, he seems to have had a whale of a time making the film. Unfortunately, despite his enthusiasm the picture was severely cut, down to 90 minutes, for its U.S. release (and possibly re-dubbed as well), and sadly not a success in America, though it did well elsewhere.

Franciscus is good, Malden even better. He makes an unusually convincing blind man, and not in a showy, Lifetime Movie kind of way. Though his character was blinded later in life, he plays the cards dealt him. Malden is excellent in several scenes, particularly in a conversation between Arno and Giordani once they realize the killer is on to them. Malden's expressions here are great: loneliness at being separated from his beloved niece, whom he's sent away, concern that he may be in too deep, regret that he allowed his eagerness to solve this puzzle get in the way of his good judgment, and that he foolishly exposed his niece to danger.

The all-region, 1080p The Cat O' Nine Tails, filmed in 2.35:1 Techniscope, looks terrific. The textures of clothing, on metal objects, of ornate and utilitarian interiors (Arno's vs. the research laboratories) are excellent, as is the color throughout, such as the soft yellows of a photographer's darkroom. The original mono audio has been retained, spruced up with DTS-HD and DTS-HD 2.0 options, along with 2.9 Dolby Surround tracks in Italian and French, along with English SDH, French, and Spanish subtitles.

Supplements are identical to the earliest Anchor Bay release, which include a "Tales of the Cat" featurette, which interviews with Argento, Morricone, and co-writer Dardano Sacchetti; radio interviews with Malden and Franciscus; radio and TV spots; and both an international (HD) and U.S. (SD) trailer. Though available previously, it's all good stuff.

Those leery of Agento's later horror films or multinational Euro-thrillers generally might consider giving this a try, as it's eminently accessible and highly entertaining, indeed one of the best films of its type. Blue Underground's superb high-def master from the original camera negative makes this an even greater pleasure to watch and a DVD Talk Collector Series Title.