Shout Factory's double feature of "Crash and Burn" and "Robot Wars" have three elements in common: both feature robots, both are from Charles Band's Full Moon Studios, and both have been erroneously billed at sometime in their histories as sequels to Stuart Gordon's "Robot Jox."


Directed by Charles Band himself, "Crash and Burn" is not a giant robot movie. Sure one appears on the cover, but fans clamoring for that giant mechanized beast to unleash havoc, will be disappointed. Instead, viewers should expect a very low-budget early 90s direct-to-video release borrowing elements from both "The Terminator" and "The Thing." "Crash and Burn" is not high art and no one going into a Charles Band movie should expect it. Instead, set your expectations back a couple notches and sit back for some truly campy and sometimes effectively creepy fun of the direct-to-video heyday. 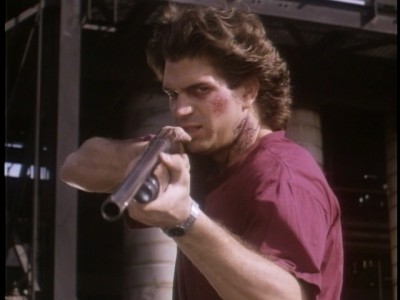 Set in the apocalyptic future, like any good 90s schlock should be, Paul Ganus plays our hero, courier Tyson Keen. After making a short stop at a gas station run by a very strange pair and engaging in an ultimately pointless conversation, Keen arrives at a reclusive TV station, where the big draw is the sleazy Winston Wickett show. Through the convenience of a "thermal storm" and a film universe where computers and robots are supposed to be band by an oppressive government, Keen is forced to bunker down in the station along with Wickett (Jack McGee, who most will recognize as George Ward in last year's "The Fighter"), the resourceful Arren (Megan Ward), a cast of fairly forgettable stereotypes, and Bill Moseley as a slightly off handyman, it's not long before an invisible threat begins to put the lives of the station's inhabitants at risk.


Band does a more than admirable job of working with what he had at hand, setting the film in an old factory, allowing for a fairly atmospheric film. He definitely milks the "stalking vision" gag that every slasher film loves to incorporate, intentionally not showing us who the cyborg intruder is, leading the viewers and band of survivors into a fairly shameless "The Thing" homage/rip-off, right down to a scene where everyone tests their blood. A slight twist is thrown in, and after 40--minutes or so of set-up, teases, and conversational filler about economic collapse, our cyborg madman is revealed. Any b-movie or horror movie fan worth their salt should be able to spot who the infiltrator is right away, and once Band reveals the foe, the actor/actress filling those shoes has a blast hamming it up as a murderous, supposedly outlawed entity. 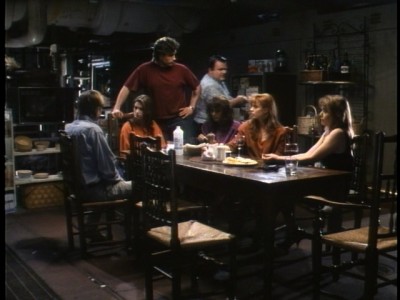 Where "Crash and Burn" falls flat is having a dull protagonist. Ganus is your stock late-80s/early-90s rugged hero and sadly the actor he faces off against in the final half of the movie just outclasses him several times over. Band throws in some effectively cringe worthy kills and senseless nudity to keep audiences on their toes, waiting until the final moments of the film to unleash the ultimately disappointing giant robot; it lumbers a for a few steps, does something necessary to the plot and falls over. Spoiler? Yes, but a necessary one.


All signs indicate "Crash and Burn" should be a forgettable, disposable movie, but in spite of its flaws, it works quite well. It's a solid mix of cheese and moderate suspense, with one great genre performance. It's a film that is more than passable on its own, but would have also worked well on "Mystery Science Theater 3000." It's not the best film on Charles Band's production resume; the "Trancers" film are still king, but as far as films the man has personally helmed, it's towards the top of the list that I've seen. "Crash and Burn" is a solid purchase for a b-movie freak, and a solid rental for everyone else. 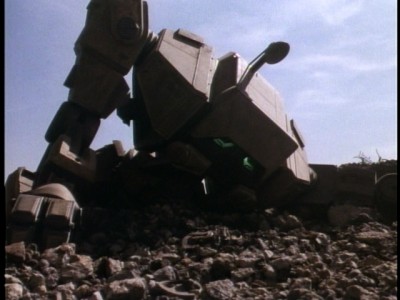 
The nicest thing I can say about 1993's "Robot Wars" is that it does indeed deliver what the cover promises: a giant robot scorpion fighting a giant robot, well, robot. The price for such coveted robot action is 55-minutes of tedium that at times seems to be built around the film's final 15-minutes of early 90s stop motion fun. Directed by Charles Band's father Albert, "Robot Wars" takes place in a bizarre future where mass transit is conducted by passengers boarding a giant mechanized scorpion, and the United States is a fairly barren wasteland following a massive conflict. Enter Drake, a hero who stumbles around most of our film from awkward conversation to boring shootout, culminating in him securing a giant humanoid robot to fight our villains. 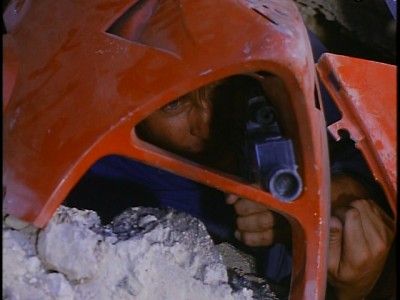 If it weren't for the stop motion finale (and the fact this movie was on a disc with a much better film), I'd have probably fought the urge to break this disc over my knee in sheer spite. The narrative that gets is to the finale stretches the meaning of the word and is, to put it kindly, insufferable. The most notable faces in the movie are the head villains, Wa-Lee (Danny Kamekona) and Chou-Sing (Yuji Okumoto). Don't recognize the names? Don't feel bad, because his face is instantly recognizable as the Sato, the lead villain in "The Karate Kid II," AND his on-screen nephew in the same film, Chozen! Yes folks, the most memorable part of "Robot Wars" will likely be your fond memories of "The Karate Kid II." 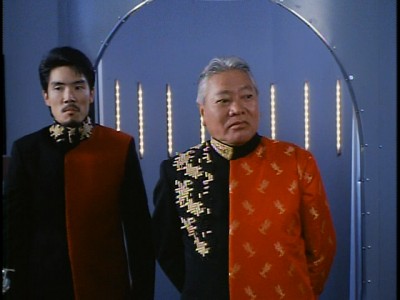 After nearly an hour of allusions to an Eastern Alliance, minor skirmishes with faceless goons where laser blasts inferior to those in the original run of "Star Trek" are traded, and finally a terrorist hijacking force our hero's hand, we get our payoff. Make no mistake, the stop motion robot fight isn't outstanding, but boy is it fun. The final 15-minutes of "Robot Wars" almost make up for the faulty story that preceded it. It's a reminder of a time when audiences were satisfied with the hard work of PHYSICAL special effects artists, even when suspension of disbelief was a primary requirement. "Robot Wars" is most definitely a niche title, attracting the attention of giant robot fans and now nostalgic adults for the early days of straight-to-video cheese. It's a movie far too dated to please kids of today, who are accustomed to instant gratification from entertainment and the wonders of CGI to make anything possible. That said, if the novelty of the bad guys from "The Karate Kid II" doesn't inspire your interest, then just skip straight to the end, you won't be missing much, and after all, the giant robots are what you came for anyway. 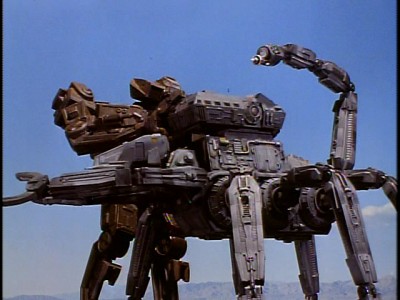 
The 1.33:1 transfer is average in all categories. Colors are a little faded, detail is middling, and contrast is far from accurate. It's a huge step up from a tired VHS tape and a notch about a cable television production, but on DVD that comes with the price of some noticeable compression artifacts, especially in shots of dark corridors and some light edge-enhancement. The English 2.0 audio track is serviceable, with a smidgen of life in the action sequences, while dialogue is mixed stronger than any other element. Only some minor distortion is evident, early on in the film.
VIDEO: 2.5/5.0
AUDIO: 2.5/5.0


The 1.33:1 transfer looks washed out and in general, is nothing impressive. Colors are closer to accurate than off kilter, detail is passable, and unnecessary digital defects or tinkering are non-existent. In general, it's a flat, dull looking film and the transfer does nothing to add any life to it. The English 2.0 audio track is a bit muddled in the dialogue department, and distortion is an issue at a few moments in the film.
VIDEO: 2.0/5.0
AUDIO: 2.0/5.0

One above-average, derivative sci-fi thriller and one, arduous slog to stop-motion robot action make this double feature of "Crash and Burn" and "Robot Wars" a very mixed bag. "Crash and Burn" is easily the film that genre fans will return to, while "Robot Wars" is likely only to find space on the shelves of robot fanatics. Neither film is technically impressive, but if you're longing to upgrade from any old VHS copies you might still have, the upgrade is definitely worth the money. Rent It.