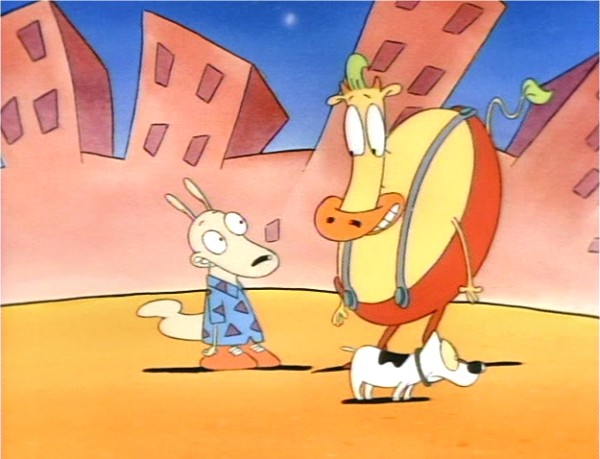 As one of the many bright spots in 1990s animation, Rocko's Modern Life (1993-96) picked up a strong following during its time on Nickelodeon. These weekly two-part episodes starred Rocko the wallaby and a small cast of supporting characters, including his dog Spunky, friend Heifer and neighbors The Bigheads. It's a true cartoon's cartoon, chock full of wacky plots, questionable physics and very little running continuity...and fans wouldn't have it any other way. It wasn't the first kid-targeted series from that era with a semi-regular dosage of off-color gags (see also: Ren and Stimpy, Animaniacs, etc.), but Rocko certainly got away with plenty of it during the original broadcast run. Since then, much of it has been stripped away for syndication.

Hard to believe it's been nearly 20 years since this first season originally aired, but many 20 and 30-somethings should be able to recall most of the included 13 episodes without much trouble. Series creator Joe Murray, who lent his creativity to three of the series' four seasons, infuses Rocko with an unmistakably light atmosphere, clever sight gags and wonderfully off-balance characters. Fan favorites like "Leap Frogs", "The Good, The Bad and the Wallaby", "Spitballs" and "A Sucker For the Suck-O-Matic" (originally written as the pilot episode) are just a few of the many highlights here, and dare I say that there's not a bad episode in the bunch. In fact, Rocko enjoyed a fairly consistent level of quality during its four-year lifespan; the final season was handed to prodocer/writer Stephen Hillenburg, who would later create a little show about a sponge with square pants.

In any case, this first season's 13 episodes originally aired from October to December of 1993 and are presented here in their original broadcast order. From top to bottom, they are as follows:

Kudos to Shout Factory for getting this DVD moving, even though it's taken nearly 20 years to arrive in "complete" form. The quotation marks are in place due to one shortened episode: "The Good, The Bad and the Wallaby", which has two brief segments edited out. The offending scene (view it here) involves Heifer and a milking machine, while another short follow-up scene is understandably trimmed for continuity. These edits were originally made by Nickeloden and that's what Shout Factory was given to work with...and it's clearly mentioned on the packaging, so at least die-hard fans will know where to direct their anger. In any case, nearly all of the off-color humor remains completely intact, so three cheers for watchdogs that don't pay attention. 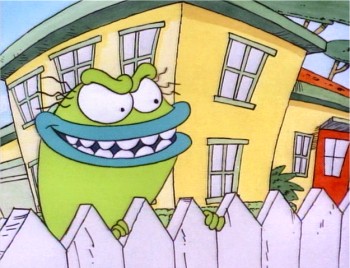 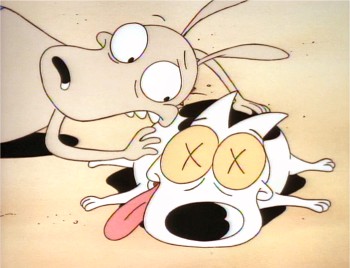 Presented in their original 1.33:1 format, these episodes look a little rough...but for the most part, some of the problems can be easily overlooked. Colors vary at times; often, they're vivid and (almost) punchy, but other sequences are a bit more murky and subdued. Black levels are often inconsistent, while image detail leans heavily towards the soft side. Frequent amounts of ghosting can also be spotted along the way: the biggest offender is episode #2, which is almost unwatchable due to this problem. The quality of this 18 year-old source material is unknown...but I'm willing to bet that most of these problems were not easily fixable, if at all. In any case, what's here is still marginally better than what the average syndicated episode looks like.

The audio presentation is slightly more satisfying; these 13 episodes are presented with their original Dolby Digital 2.0 Stereo mixes and sound just fine. Dialogue and music cues are free of hiss, distortion and other such problems. Unfortunately, no optional Closed Captions or subtitles are included during these episodes.

Seen below, the static menu designs offer simple, problem-free navigation. Each two-segment episode has been divided into halves and a handy "Play All" option is included for each disc. This two-disc set is housed in a clear hinged keepcase. Episode titles are printed on the packaging and a promotional insert is also tucked inside. 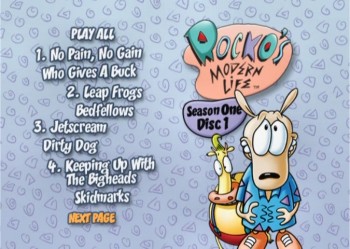 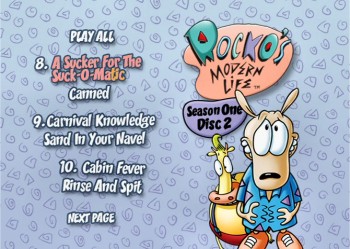 Bonus Features
No extras...but most likely, future Rocko season sets will include a few goodies. Until then, the episodes will have to do.
Final Thoughts

It's been nearly 20 years, but the first season of Rocko's Modern Life has finally made it to DVD...and even though one episode is (slightly) edited for content, it's a reasonable compromise. The DVD is below average but understandably so, with a slightly underwhelming technical presentation and no bonus features. In any case, the content is the main selling point, and nostalgic fans of Rocko will enjoy this from top to bottom. Mildly Recommended overall, especially at such a reasonable price point.