Taking place over one whirlwind night in New York City in 1954, Insignificance draws together four iconic personalities from the period to pose a historical "what if." Represented are brains, beauty, brawn, and barbarism, and all the ways they may clash. We also see the effects of early fame culture and the consequence of technological advancement--all within the space of a few short hours.

The core of the movie kicks off when Marilyn Monroe, here referred to only as "The Actress" and played by Theresa Russell, leaves the set of The Seven Year Itch and goes to visit "The Professor" in his hotel. The scientist is Albert Einstein (Michael Emil), and he is in town to attend a peace conference but is also expected to testify before HUAC. Just before Monroe's arrival, the Professor was being bullied by "The Senator," a.k.a. Joseph McCarthy, and played by Tony Curtis, who seems to be using a trick or two gleaned from his co-star Burt Lancaster's performance in The Sweet Smell of Success. What the Senator wants is for the Professor to go ahead and own-up to being a Communist, and in doing so, denounce Soviet ideals and their weapons program. The way he sees it, if the world's most revered mind backs this cause, the collective American mind will, as well.

The Actress has sought out the Professor in hopes of picking his brain and getting to know who he is. (This bit of whimsy is entirely plausible, Monroe was known to be fascinated by intelligent men.) The best scene in the movie is when she sets out to prove to the befuddled thinker that she knows the Theory of Relativity. Using toy trains, balloons, and flash lights, she rushes around his hotel room demonstrating the principles of his hypotheses. When she is done, the Professor applauds the performance, but the Actress sadly admits that she wishes she actually understood the principles she just related, she knows the words but not their full meaning. It's one of the central thematic concerns of Insignificance: what we know and how we know it, and when we really know nothing at all. The flipside here is that Einstein never really figures out how to get to know Marilyn, his interpersonal skills stop at the preconceived divide between men and women and something he once learned from a Cary Grant film. Remove the sex or keep it in, she'd be fine with either, but he doesn't know how to just sit and be with someone.

Insignificance is directed by Nicolas Roeg (Walkabout) from a script by playwright Terry Johnson. It was released in 1985, and like many films of that era, I know it from having been championed on the old Siskel and Ebert show, but this is my first time seeing it. Honestly, I am about as befuddled by it as Einstein is of having a gorgeous blonde knocking on his door in the middle of the night. The execution of the material comes off as slapdash at times, with Roeg overly complicating the storytelling in ways that only call attention to the fact that the script isn't all that complex. Conversations are frequently splintered with flashbacks to events from everyone's childhoods, as well as images of the aftermath of Hiroshima and Nagasaki that haunt Einstein. Roeg also jumps around the city, keeping us up to date on the activities of the Senator and the final member of his imagined quartet.

Gary Busey plays "The Baseball Player," a stand-in for Joe DiMaggio, who was Marilyn Monroe's husband. DiMaggio was notoriously jealous, and there are plenty of anecdotes about him losing his cool, including getting angry about the endless retakes and all the gawkers on the set of The Seven Year Itch during the famous scene when Monroe has her skirt blown over her head while standing on a subway grating. (Russell wears this recognizable dress for the entire movie.) The Player eventually ends up tracking the Actress to the hotel room, and convinced that the Professor is a psychiatrist taking advantage, muscles his way in. This forces a confrontation between husband and wife, with the Professor playing a kind of referee. 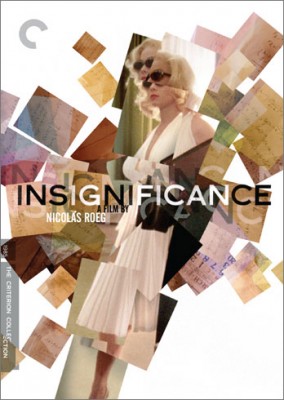 Next to the interactions between the Professor and the Actress, the stuff with the ball player is the most compelling and honest. It's also when Roeg drops most of his showy editing and let's the scenes play themselves out. Johnson's dialogue is solid, and the actors handle his words deftly and with great aplomb. Busey is surprisingly understated and nervy, and Emil gives the Professor certain absent-minded peculiarities but mostly stays earthbound. Russell has the most difficult performance. There was no one else like Marilyn Monroe, and her breathy speaking voice is familiar to just about everybody. Russell manages to find an impressive level of imitation without every slipping too far into caricature, and she gives Monroe the deserved respect, treating her feelings and desires as genuine rather than the foolish preening of a mixed-up diva. Only Tony Curtis flubs it a little. His rat-a-tat patter is occasionally too cartoony, and his mannerisms border on shtick. J.J. Hunsecker would not approve.

Nicolas Roeg's work often strikes me as far less considered than what most of his supporters give him credit for. I find a lot of his stylistic flourishes to be unnecessary to the actual storytelling, the sort of thing that other directors might shoot because they can, but then cut out in the editing stage. Here, the intrusion of flashbacks and visions seems ramshackle, with many of the sequences--particularly the ones with Theresa Russell writhing around in pain--going on too long. Worse, the information these collages are intended to impart--Einstein is distraught over the application of his discoveries, Monroe was sexualized at an early age, DiMaggio's dad was a jerk--are kind of obvious and come out just as well in the dialogue. Roeg uses silly sound effects, multi-angle cutting, and cheeseball zoom techniques to overtly underline and highlight stuff the audience should get just fine without the help. And what was up with all that Native American chanting and "elevator goes up, elevator goes down" nonsense? Even Jim Morrison would have blushed at such blatant appropriation of Native American imagery to create a pseudo-mystical subtext.

Insignificance as a whole, struck me as undercooked and cheaply produced. (No hyperbole, the musical score by Stanley Myers and Hans Zimmer is some of the worst I've ever heard, complete with awful anachronistic synthesizer selections.) There's a great idea at the core of Insignificance, and a lot of wonderfully realized scenes, but there is too much distraction and not enough nourishment. The Zabriskie Point-style ending blows up a lot of stuff, but it didn't really blow my mind. It's almost like Roeg was hoping to dazzle us with all the bright shiny things so we wouldn't really notice how the conclusion more or less implodes. Perhaps it played better in the Reagan era when Einstein's fears were still a worrisome part of our everyday lives, but now, insignificance is a word that just about covers it.

Video:
Criterion is releasing Insignificance on Blu-Ray as a 1080p, 1.78:1 transfer. The picture quality is really quite excellent--possibly too clear, shining too much light on design flaws in the '80s production. There is a light amount of grain and a clear image throughout. Colors are strong, and there is excellent detail on the fabric and skin. Theresa Russell's complexion, for instance, shows a lot of nuance, and so too do we see emotional changes as reflected in her eyes and almost grotesque human detail in a scene where she breaks down. The neon outside of the Professor's hotel has a gorgeous glow, and the whole film looks pristine.

Sound:
The uncompressed monaural soundtrack has a lot of warmth and the strength of clarity. The dialogue is sharp, and the music, despite being awful, sounds excellent. Optional subtitles are available for the deaf and hearing impaired.

Extras:
Criterion gives Insignificance its usual packaging, including a booklet with photos, credits, a new critical essay, and correspondence between the director and the screenwriter.

The extras on the disc are few. New material includes interviews with Nicolas Roeg and his producer Jeremy Thomas, and another with editor Tony Lawson. Both are under fifteen minutes and feature the participants reminiscing on the film, its making and its meaning.

Making "Insignificance" is a period documentary (also just under fifteen minutes), looking at the filming and featuring interviews with the main actors.

Finally, we get the original theatrical trailer.

FINAL THOUGHTS:
Rent It Sometimes the package is better than the movie, and I think this is one of those times. Criterion has done a great job putting this release of Insignificance together, but Nicolas Roeg's 1985 flight of historical fancy didn't really grab me. The core actors turn in fine performances, including great turns by Theresa Russell as Marilyn Monroe and Michael Emil as Albert Einstein, and the script touches on some interesting aspects of this imagined meeting, but the direction struck me as messy and not truly servicing everyone else's work.