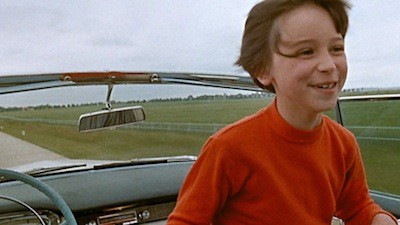 Louis Malle's 1960 French comedy Zazie dans le métro is a children's film dressed up in its grandparents' clothes. This madcap, surreal look at one little girl's day trip to Paris is silly fun, though alternately old fashioned and progressive, adopting well-worn styles of cinematic humor to toy with modern sensibilities. Slapstick and wordplay lend a quirky bend to Zazie's world. Silent films are an influence, as are Looney Tunes, and like the best fairy tales, the wolf here has some particularly nasty teeth.


The film's heroine is Zazie, played by child actor Catherine Demongeot, a sort of Pippi Longstocking by way of Chaplin's The Kid. Zazie is a prankster visiting with her uncle Gabriel (Philippe Noiret, Coup de Torchon) while her mother (Odette Piquet) has a quick fling with her new lover. The gregarious Gabriel is a bit of a loose cannon himself. He tells his niece that he's a night watchman, but he's really sneaking off to a nightclub where he dances in drag. He is not a "homosessual," as the word is regularly mispronounced; on the contrary, he's a ladies man with a particularly gorgeous wife (a particularly gorgeous Carla Marlier). The wife also catches the lecherous eye of Trouscaillon (Vittorio Caprioli, Il generale della Rovere, Dassin's The Law), a rapscallion who followed Zazie home after his buying her "blew-jeans" failed to yield the desired results. A surprising joke later in the picture reveals he has been increasing the age of his prey throughout the day, though the older Madame Mwack (Yvonne Clech) jumps his age threshold. His motivation is just one of the many darker, adult jokes peppered in Zazie dans le métro, while the Madame Mwack character is one of the only times Malle's movie proves to be mean-spirited. Unless the joke is that she's not the "old hag" they keep calling her--which she's not--and it's a critique on the shallow prejudices of the other characters.


In fact, there could be a lot of humor in Zazie dans le métro that has been lost across time and culture. The title refers to Zazie's dream of riding the Parisian subways, something she does not get to do in the movie because the train staff is on strike. There is much debate over this method of employment protest, and Malle and his co-screenwriter Jean-Paul Rappeneau (working from a book by Raymond Queneau) are clearly making a comment on current social issues. Excepting the most obvious of meanings, most of this kind of stuff went right over my head.


Thankfully, most of Zazie's adventures don't require any added insight. Unable to ride the rails, Zazie must create other mischief. She sneaks out of the house for some adventure. That's when she meets Trouscaillon. Running away from him is one of the many inspired chase sequences in the film. She leads him through back alleys and shopping districts for a series of gags, which grow increasingly implausible, the brunette Jerry getting away from the aging Tom. Later, Gabriel is hijacked by a tour bus, and Zazie and Mwack must pursue him through clogged traffic. Malle and his editor, Kenout Peltier, favor quick cuts, snipping out middle bits, moving their characters willy nilly through the scenes. They also play with film speed and crank the audio, and something completely nonsensical could be lurking around any corner. The guy in the polar bear suit eventually has his place, but at first, he's just a random bit of fun.


The whole movie is just a collection of random bits of fun, really. Zazie dans le métro is a pure blast of chaos and charm, with a winning young star and a cast of gung-ho supporting players who really get into the spirit of the thing. It plays well to the young at heart, despite some of its more mature undertones. I think a lot of that stuff would go over most kids' heads anyway--or, at the least, they'd do like I did when I was Zazie's age and I'd just pretend I didn't know. Zazie dans le métro is slapstick verité, embracing the oft undervalued tendency for the nouvelle vague not to take itself too seriously. (Indeed, listen for the swipe Malle takes at his compatriots in the new wave in one off-hand joke.) It's no surprise that Zazie is considered a cult movie, as it is a peculiar concoction, playing acquired sensibilities in the broadest manner. If you can keep pace with its precocious star, then there is much joy to be had; if you can't, then maybe you weren't much fun to begin with. Why be so grumpy? Let Zazie cheer you up! 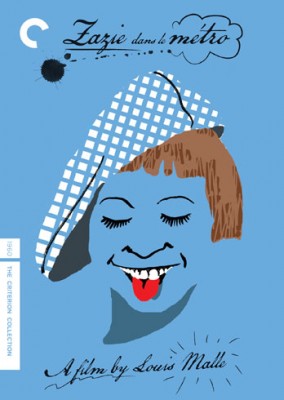 
Zazie dans le métro was filmed at a 1.33:1 aspect ratio, and Criterion's full frame high-def transfer presents the image as intended, with a strong, nuanced color palette that contrasts the colorful world of Zazie's imagination with the realities of 1960s Paris. Details are strong, with natural skin tones and nice attention paid to texture, particularly fabrics. Gabriel's checkered suit would have caused havoc on older televisions, but every black-and-white square is evident here. In a couple of scenes, the grain threatens to overwhelm the screen, but these appear to be spots where the original film also would have lacked the sharpness of the surrounding material. The print is otherwise free of scratches or damage, and there is no digital noise to speak of.


The French soundtrack has been mixed as an uncompressed monaural audio track. The sound is clear and crisp, with good volume levels and no distortion.


The optional English subtitles are well done and easy to read.


On-disc extras begin with vintage interviews with Malle, two with the original author Raymond Queneau, and Zazie herself, Catherine Demongeot. These all come from French TV from around the time of the film's release, totaling nearly half an hour all together. There is also a pre-existing interview (about 10 minutes) with screenwriter Jean-Paul Rappeneau, who went on to direct many films himself; here he is discussing working with Louis Malle.


Of particular interest to Criterion fans will be the new audio interview with William Klein. Klein served as an artistic consultant on the film, which makes sense if you know his own excellent and delightfully bizarre pictures. On this piece, he talks for nearly 15 minutes about making Zazie.


Le Paris de Zazie is a short film from 2005 revisiting the movie's locations with the assistant director, Philippe Collin. It's always interesting to see what changes and what stays the same over the years.


Finally, the disc has the original French trailer for Zazie dans le métro.


Zazie dans le métro is an odd duck amongst Louis Malle's filmography--but then, it would be an odd duck in just about any filmography. This screwy kinda-sorta kid's picture takes audiences on a wild romp through Paris, led by a merry trickster named Zazie. The girl goes looking for fun, poking at the bloated self-importance of adult mores in the process, and Malle delivers strings of gags and crazy chases, bringing the whole of French society into his cinematic pie fight. (Or, make that a sauer kraut and schnitzel fight.) It's breezy fun, though like an overly precocious child, could wear out its welcome for some viewers. Recommended.