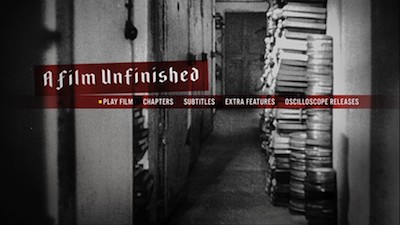 Hollywood can keep making horror films and raconteurs can keep spinning yarns about haunted houses, but nothing will ever be as spooky as real life.

The documentary A Film Unfinished is both a ghost story and a cinematic archaeological project. Yael Hersonski's movie is an excavation of several cans of film left behind in an East German vault by Nazi propagandists. Labeled with the title Ghetto, the footage shows the Warsaw encampment that was the home to thousands of Jews for a good portion of the war. Shot in May 1942, mere months before the Germans would shut the ghetto down and send most of the prisoners to their deaths, the remaining hour of film, abandoned during editing and absent of a soundtrack, is bizarre and disturbing. Little official record exists about Ghetto, why it was made or why it was jettisoned. Yet it serves as a potent document of the conditions in the giant prison, and of how the Nazis tried to curate their own historical records--to the point that we must still question everything we see.

A Film Unfinished essentially takes all of the remaining material--including a more recently discovered reel of outtakes and one cameraman's personal movies, shot in color--and puts together the remaining footage with what little is known about the original project. Hersonski uses three major sources of information to try to understand what the Germans were hoping to accomplish: the personal diary of the Jewish warden charged with overseeing the camp, the secret journals of prisoners, and the testimony of Willy Wist, a cameraman whose name appeared on the few official documents relating to Ghetto that still remain. The journals are read in voiceover, while the deposition of Wist is reenacted by two actors who mostly appear just out of frame. Wist was either a man living in denial, who had blocked out what happened, or a guilty co-conspirator trying to outrun his past, as he alternately feigns ignorance and seems troubled by the few things he admits to remembering. The sober way in which he talks about the assignment goes against the smiling image of the young man who accidentally gets caught by his comrade shooting home movies. (Hersonski regularly pauses the Nazi film when part of the film crew appears in the frame, highlighting their placement like a prosecutor presenting evidence.)

One of the things Wist remembered was also A Film Unfinished's most controversial scene. The documentary was released without a rating because the dunderheads at the MPAA objected to the nudity in scenes in a ritual bath. One group of men and one group of women are stripped and herded into an underground bathhouse. Barely able to disguise their shivers in the cold water, they dunk themselves repeatedly. It's perhaps the most disturbing segment of the movie, particularly as we learn that these scenes, just like all of the scenes in Ghetto, have been staged. The bathers are gaunt and malnourished, and this scenario was only concocted to humiliate them. There is nothing prurient to be gained by watching it, so any objection to its harsh truth is just misguided. To have left it out would have done history a disservice. 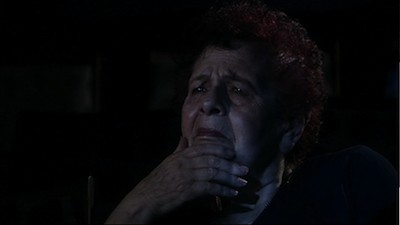 From what Hersonski can gather, Ghetto was meant to achieve two goals: to show that conditions in the Warsaw ghetto weren't as bad as some might claim, and to suggest that the Jews starving in the streets were the fault of the greedy upper class living on the fat of the land while everyone else suffered. Thus, the crews filmed the worst poverty as it really existed in the streets and then turned around and staged opulent get-togethers where healthy-looking prisoners were seen to be having a good time. To counteract what we see, Hersonski not only finds pertinent passages in the written first-hand accounts, but she also gathers a handful of survivors who watch the found footage and react to what they see. They were all children during the war, so the memories are painful and sometimes seeing their faces, filmed in the dark of a movie theater, can be painful as well. They are shocked by how the Nazis tried to twist their miserable existences into things they were not. Thankfully, there are also cathartic moments. At least for a couple of the witnesses, this trip to the past brings some healing.

Unsurprisingly, A Film Unfinished is a somber affair. Hersonski treats the material with a quiet reverence, maintaining an even tone in the narration and using Ishai Adar's moving ambient score as a gentle lifeline to lead the viewer through what is particularly difficult material. There are no huge answers at the end of the movie, no great explanation as to why one group of people would do such a thing to another group of people, why there would be this sickening compulsion to film it and mold it and turn truth upside down. I suppose, though, that's because there are no answers that could make sense, no matter how clear-cut. What motivation would be satisfying? What endgame would actually make any of this seem rational? All we can do is watch and learn and feel, and hope against hope that, as a global people, we will never allow such darkness to fall across our world ever again.

We hope...and yet that haunted feeling lingers. 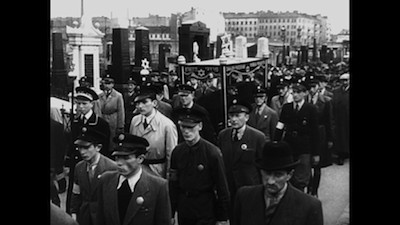 Video:
Oscilloscope continues to impress with both their selection of films and their presentation of them. A Film Unfinished is shown in both color and black-and-white, with a 1.78:1 anamorphic image (though the archival footage is full frame, the new material shot by Hersonski is widescreen). The overall print quality is excellent, with even the old footage given as much care as possible. There is some very low-level interlacing evident at times, but it's hardly noticeable even at its worst.

Sound:
The soundtrack for A Film Unfinished is as simple and as subtle as they come. The stereo mix on the DVD does a good job of balancing its two major components--the voiceover and Adar's tasteful music. The talking is dominant, while the music provides foundation, and because this isn't the kind of sound design that jumps out at you, it's easy to miss how elegantly executed it really is.

Subtitles appear in English. There are five languages spoken here, each document used is rendered in its original words.

Extras:
The trademarked Oscilloscope packaging is always welcome: a sturdy interior tri-fold case inside a slipcover. The inside of the case has liner notes by film professor Annette Insdorf.

The supplemental features are not large in number, but they are perfectly chosen. Two new video features further go over the history of the material, including an interview with author Adrian Wood (14 minutes, 35 seconds) and one with scholar Michael Berenbaum (3:37). Wood is an archivist and historian specializing in Holocaust-related material, and he talks about the search for and discovery of the film materials for Ghetto, as well as his other work with film materials from the war. (I am pretty sure I watched at least part of this online last year.) Berenbaum tries to contextualize the movie in history and what it means for our collective knowledge of our time, and he talks about the survivors watching the movie.

Of special interest to film fans is the 1945 short documentary Death Mills (21:07), directed by the great Billy Wilder. This rare movie was actually made by the U.S. to show in Germany as an antidote to the Nazi propaganda--though this version is translated into English. Though a little melodramatic, it's also surprisingly hardcore, showing the world the aftermath of the atrocities for the first time. It's full of righteous anger that was still very fresh, and it doesn't let the German people off the hook at all--and it maybe could have used a little context itself. It definitely shows the perception of events and the understandably heated emotions of the post-War period.

Finally, there is a study guide for teachers to use if they wish to make A Film Unfinished part of their curriculum, as well as trailers for other Oscilloscope releases.

FINAL THOUGHTS:
Highly Recommended. A Film Unfinished is a moving piece of cinema. Yael Hersonski's excavation of an incomplete Nazi propaganda film brings forward old horrors to look at them in a new way. The documentary works as historical document, but also subtly examines how we look at moving images and the way they can be used to manipulate the truth. The director searches for context and uses personal recollection and testimony to try to piece together one of Hitler's lost efforts of misinformation. The A Film Unfinished package is excellent, with extras that further illuminate the time period shown and the techniques used to advance a cause. This is a movie you won't ever forget. 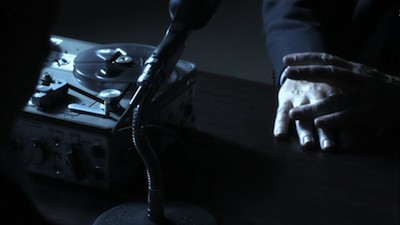