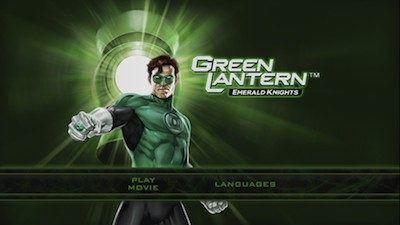 I should probably say from the outset, I've never really been much of a Green Lantern fan. The convoluted mythology mixed with the base emotional platitudes and goofball aliens with names that resemble what happens when my cat walks across my keyboard never really lit up my Christmas tree. So, you Lantern-heads (or whatever you call yourselves? Poozers?) may want to take some of what I have to say with a grain of salt; your mileage may vary by several space sectors.

My reasoning for picking up Green Lantern: Emerald Knights is for much the same reason that Warner Bros. Animation has put this animated anthology together. With the new live-action movie version of the property on deck to be released in a couple of weeks, I thought it might serve as a good warm-up, a way to reintroduce myself to the franchise in hopes of experiencing it anew. This transition into other media should hopefully show the cosmic cops in a whole new lantern light...right? I mean theoretically. I don't like old Star Trek or anything else J.J. Abrams has done, but I liked his big-screen Star Trek reboot; thus, anything is possible.

Green Lantern: Emerald Knights is the latest in a string of high-class animated features featuring DC Comics characters that have been created exclusively for home video release over the last couple of years. This one serves as a sort of intro into the Green Lantern mythology. The Green Lantern Corps is an army of intergalactic warriors who fight evil with powerful rings that harness the force of their considerable will. The central Lantern is Hal Jordan (voiced by Nathan Fillion), the first human to join the team and one of its greatest officers. Jordan is in the midst of training Arisia (Mad Men's Elizabeth Moss) when Krona, an ancient enemy of the Corps and their blue-skinned bosses, the Guardians of Oa, reemerges to pose a threat to the entire cosmos. As the Green Lantern forces prepare to do battle, Jordan and some of his fellow Lanterns regale Arisia with stories of battles long since won, fought by heroes past and present. 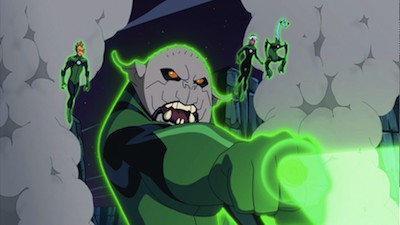 There are five stories in all, plus the sixth framing device. The stories are strung together nicely, avoiding too many overly obvious jokes in the interstitial scenes, finding natural ways to go from one to the next while building toward Emerald Knights' climactic action sequence. Each story is handled by a different writer or writing team, including well-regarded comic book luminaries who have worked on the title. This includes Watchmen co-creator Dave Gibbons and current series writers Peter J. Tomasi, Eddie Berganza, and Geoff Johns. The quality of the stories vary, with the best of the bunch being Berganza's kung-fu flavored retelling of one lady Lantern's harsh lessons when she returned to her homeworld after joining the Corps. Badass brawler Laira (voiced by Kelly Hu) is tangled in ancient grudges and family quarrels, and besides having some of the most exciting fight scenes, the Laira segment also uses traditional tropes to give viewers an immediate "in" to her dilemma. The other pieces feel slight by comparison. The short story format leaves most of the characters underdeveloped; a previous knowledge of who most of these folks are seems necessary to really enjoying Emerald Knights.

In addition to changing writers, some of the stories also adopt subtle differences in art style. The Laira segment, for instance, has a smoother anime-inspired look, while Gibbons' Mogo story has a fine line quality, reminiscent of European sci-fi comics. Both of those sections are also directed by Jay Oliva, one of three directors on Emerald Knights alongside Lauren Montgomery and Christopher Berkeley. Despite the many guiding hands, the animation in Green Lantern: Emerald Knights is uniformly excellent. Characters have a lot of personality, and the spaced-out warfare is exciting and kinetic. When the Lanterns go into combat, the action is faced-paced and inventive. The fighters swirl through the skies, dodging meteors and lasers, and the viewer is dragged along for the ride.

Unfortunately, when the action dies down, the movie gets rather dull. The Green Lanterns are a bunch of squares and they act like it. Their pseudo-religious foundations and simplistic philosophical discussions aren't very interesting. For all the artistic inventiveness, there is little new under Oa's particular sun. Admittedly, the climax of the film is pretty cool, and squaring-off with Krona makes for a visually dazzling finish, but I kind of didn't care at that point. I appreciated the presentation, but I wasn't invested in it. My reintroduction to the franchise had already spun off course.

Again, true Lantern fans will likely find Emerald Knights right up their alley. If you like the fantastical tapestry that provides the comics with their backdrop, you will probably be stoked to see some of your favorite characters brought to life in this way, and it will only whet your appetite for Ryan Reynolds donning the jade tights later this month. Neophytes likely won't find Emerald Knights much more invigorating than I did, but it may lay some groundwork for you to understand what is going on in the live-action version (if the lengthy voiceover in the trailer is anything to go by, they're trying to drag in as much of the complicated backstory as possible). Green Lantern: Emerald Knights is a gorgeously rendered cartoon, it's just not a terribly involving one. 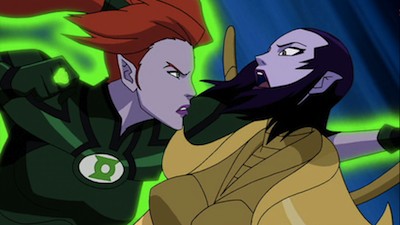 Video:
Warner Bros. has released Green Lantern: Emerald Knights as a 1080p DVD with a 1.78:1 anamorphic widescreen transfer. For the most part, I thought the image looked pretty good. Colors are bright and there is nice balance between the neon lasers and the dark space backdrops in most of the fight scenes. Motion is good without any real blur, and though there is occasional pixilation and banding, it is minor. It's my first time watching a Blu-Ray of one of the DC Comics movies, and it seems to be an improvement over some of the complaints I'd read about previous releases.

Sound:
The main soundtrack is mixed in Dolby 5.1 and is particularly vivacious when it comes to sound effects. Most of the dialogue is pretty centered, but the audio landscape has a lot more going on than that. Battle sounds move around the room, and the music has a nice, forceful presence in the mix.

Viewers can also pick a French language track mixed in 5.1, or alternate Spanish tracks (Castilian and Latin) in stereo. Subtitles are available in all languages, with the English track being for the deaf and hearing impaired.

Extras:
Green Lantern: Emerald Knights is a two-disc set, with the main disc being the Blu-Ray and a bonus DVD version that also has the access portal to download a digital copy (the code is included on a paper insert in the case). The packaging is a standard-sized Blu case with trays on the inside of both covers to hold the separate discs. The outer slipcover has the same art, but it's embossed with shiny foil printing. There is a second paper insert advertising new Green Lantern toys. 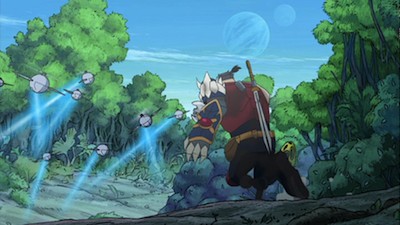 Bonus features on the BD are plentiful, and serve as a primer on the Green Lantern mythos and should also please fans who can't get enough of the sci-fi comic book property. Since the main movie had heavy involvement from the talent behind the comics, so too do the extras:
* "Why Green Lantern Matters: The Talent of Geoff Johns "(18 mins.): A look at the writer's revitalizing of the Green Lantern franchise.
* Full-Length Commentary: Geoff Johns returns to discuss the movie alongside DC Comics publishing muckety-muck Dan DiDio. The two work together regularly and so have a good rapport, and since they aren't actually a component of the animation team, their spirited conversation tends to lean toward more of the history and background--as well as their love--for the characters.
* Green Lantern Virtual Comic: A look at a segment from the first ever Johns-penned issue of Green Lantern.
* Two "From Comic Book to Screen" Featurettes: A short look (around 7 minutes all told) at adapting the characters Abin Sur and Laira Omoto to the cartoon, lavishly illustrated with art from the original books.

The above are exclusive to the Blu-Ray version of Emerald Knights, the following are on both the BD and the DVD editions:
* "Only the Bravest: Tales of the Green Lantern Corps "(32 minutes): A serious discussion of the ongoing themes of heroism in the Green Lantern saga, with Johns, Didio, professor of psychology Dr. Benjamin Karney , writers Michael Green and Marc Guggenheim, and author Phil Cousineau (The Hero's Journey). Hal Jordan as a central figure to the mythos and the full extent of the GL Corps are heavily covered, as is a historical view of what it means to be a hero. (Note: Gritted teeth appear to be a comic book invention, I see no historical evidence, unless you count Teddy Roosevelt's smile.)
* Bruce Timm Presents 2 Bonus Cartoons: An excerpt from a season two Brave and the Bold episode, "The Siege of Starro! Part 1," and the full Green Lantern Corps.-centric episode from the same season, "Revenge of the Reach."
* Sneak Peeks: Batman: Year One and All-Star Superman (both about 10:45): Extended peeks into the next Warner Bros. animated comic book feature and also the studio's last one--two of the more ambitious undertakings, adapting two of the more ambitious comics about DC's most iconic characters. I like seeing the art-to-art comparisons, how the work of the original creators influenced this new version--though in both cases, we don't see any final animation. I'm pretty excited to see Year One, and Breaking Bad fans will likely dig the idea of Bryan Cranston (who is interviewed) voicing Jim Gordon.
* Trailers: Actually, more like commercials for DCU Application and Matty Collector.

All of these extras are in HD.

Note: A version of the Green Lantern movie trailer plays as the disc loads, though not in HD and also not in anamorphic widescreen. For those wondering what that All-Star Superman movie looks like, you also get a trailer for it during load-up.

FINAL THOUGHTS:
I know, I know, my geek cred is on the line, but Green Lantern: Emerald Knights just didn't grab me. In terms of animation, it's superb, with wonderful action sequences and vividly rendered effects; in terms of story, this animated anthology is fair to middling. Big fans of the franchise may think otherwise, it definitely seems geared more toward the initiated then it does the newbie. A pile of solidly crafted extras add a lot to the package, but even so, this isn't a film I'd watch more than once, so I say Rent It. 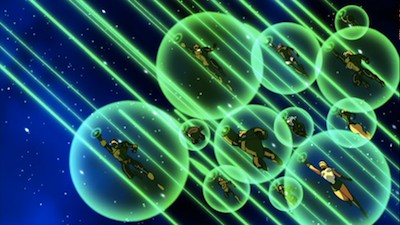