Warner Archive // Unrated // March 1, 2011 // Region 0
List Price: $19.95 [Buy now and save at Wbshop]
Review by Stuart Galbraith IV | posted March 31, 2011 | E-mail the Author
In a recent review of the 24-film Humphrey Bogart: The Essential Collection I took Warner Home Video to task for reissuing the same Bogie movies over and over while ignoring a whole slew of pictures never released to home video at all. As if in response, the label's made-on-demand Warner Archive Collection recently debuted three new-to-video Bogie titles: Crime School (1938), The Wagons Roll at Night (1941), and The Two Mrs. Carrolls (1947).

The Two Mrs. Carrolls isn't very good - indeed, some of it is quite awful - but that doesn't take away from the pleasure in finally getting to see it after all these years. It's just about the only post-High Sierra starring film of Bogart's I hadn't seen. I suspect other classic Hollywood movie fans have a similar attitude toward these more obscure, often disappointing but still welcome releases.

An overwrought thriller based on a popular play but also obviously derived from Hitchcock's Suspicion (1942) and other novels and films, The Two Mrs. Carrolls is the kind of picture that smells like a turkey five minutes in and gets a whole lot worse before finally building to a somewhat redeeming climax. The bad script thwarts Bogie's best efforts and only co-star Barbara Stanwyck walks away relatively unscathed. 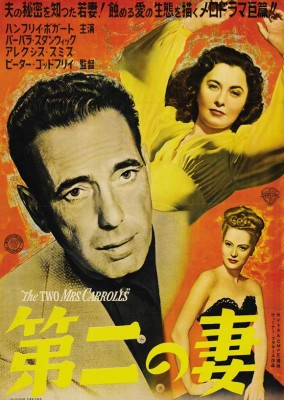 The play was set in the south of France but, for no clear reason, moved to Scotland and England for the movie, despite its American stars. Artist Geoffrey Carroll (Bogart) and Sally Morton (Barbara Stanwyck) embark on a whirlwind romance after meeting while on vacation in Scotland. However, Sally discovers a letter addressed to Mrs. Carroll, and Geoffrey admits to an invalid wife and daughter, saying the letter was to ask his wife for a divorce. But Sally ends the relationship anyway on moral grounds.

Two years later, Geoffrey is now happily married to Sally, the couple and Geoffrey's daughter, Bea (Curse of the Cat People's Ann Carter), living in the large, ornately decorated house Sally inherited from her late father. (Nothing in the film is convincingly British, the big house more like Frankenstein's Castle than anything found in England, particularly for a couple of limited means.) Geoffrey's also a success by this time, his moody masterpieces symbolized by "The Angel of Death," a gruesome portrait of the first Mrs. Carroll which Sally unaccountably allows to be displayed prominently in the living room.

More characters arrive. Charles "Penny" Pennington (Pat O'Moore) is still in love with Sally, which makes Geoffrey extremely jealous. "I have the feeling this is the beginning of a beautiful hatred," Geoffrey says in an odd, misplaced reference to Bogie's Casablanca. Dr. Tuttle (Nigel Bruce) is another guest. Actor Bruce was suddenly out of work when Basil Rathbone abruptly stopped playing Sherlock Holmes opposite Bruce's Dr. Watson. Bruce wears a goatee in this, but that can't disguise the fact that his Dr. Tuttle and Dr. Watson are otherwise indistinguishable. Moreover, Bruce played a very similar part in Hitchcock's Suspicion.

Another guest is Cecily Latham (Alexis Smith), who makes no bones about wanting Geoffrey for herself and, with her goading him on, Geoffrey begins contemplating the murder of the second Mrs. Carroll.

Bogart menacingly brings trays of poisoned milk up to his ailing wife's bedroom just like Cary Grant did for Joan Fontaine in Suspicion, though the milk doesn't eerily glow as it did in Hitchcock's film. Geoffrey's jealously guarded paintings, portraits cosmically linked to their living subjects, recalls Portrait of Jennie (the novel having been a best-seller in 1940, though the movie version wasn't released until 1948) and The Picture of Dorian Gray (1945). Franz Waxman's overemphatic score is reminiscent of Miklós Rózsa's for Hitchcock's Spellbound, which featured Gregory Peck as a similarly mentally ill (possible) murderer. Waxman's score is excellent as music but intrusive as underscoring. In one scene, for instance, Geoffrey is calmly painting when the score suddenly blares away as if accompanying an epic 18th century naval battle.

Though he tries his best, Bogie is saddled with a weak-willed character that turns to jelly when chemist Blagdon tries to blackmail him. (Victor Jory played Bogie's part on Broadway.) There's an attempt to portray Geoffrey as mentally ill and not entirely responsible for his actions, but the way this is suggested - a confused Geoffrey rubs a particular spot on his forehead right before each act of violence - is pretty ridiculous.

Stanwyck comes off better though Sally's scene with Bea (a totally unbelievable characterization), where Geoffrey's actions are finally revealed to her, is utterly ludicrous, with all of Geoffrey's lies suddenly exposed at once in about two minutes of incredibly clumsy exposition. Stanwyck has to react to each revelation with increasing shock and horror; that she almost pulls it off is a testament to her ability as an actress.

All these problems aside, the film does come alive in the last two reels, during the climatic confrontation between Geoffrey and Sally, alone at home as a fierce rainstorm rages outside. This sequence is beautifully shot (by Peverell Marley, then married to Linda Darnell) and after looking pretty silly for most of the film Bogie finally appears genuinely frightening.

Billed as a "remastered edition," The Two Mrs. Carrolls looks about on par with other Warner Bros. titles of similar vintage on regular DVD format. The contrast is a bit high at times but it looks fine generally. The 4:3 image really comes alive during the storm-swept climax, with some outstanding black and white photography. The Dolby Digital mono audio (English only, no subtitle options) is acceptable.

The only supplement is a trailer that gives away the store while obviously reluctant to peg Bogie as a psychotic serial murderer.

More for Bogie and Stanwyck completists than general classic Hollywood film fans, The Two Mrs. Carrolls is a welcome release, mediocre though it is. For those fans it's Recommended.