Strange Case of Angelica, The 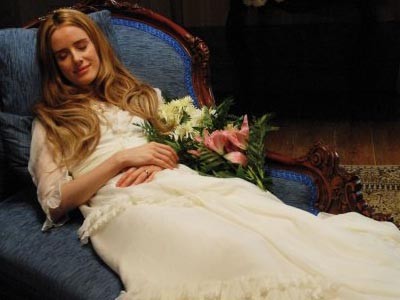 Is there such a thing as light gravity? I can think of no better case than the recent films of Portuguese director Manoel de Oliveira, 2009's Eccentricities of a Blonde-Haired Girl and now his latest ingenious cinematic creation, The Strange Case of Angelica. Much is made (and perhaps rightly so) of de Oliveira's age: He is now 102 years old, which makes him the oldest working filmmaker and the only one left who began working in the silent era; and there is a graceful, supremely calm confidence to The Strange Case of Angelica that one would have to describe, complimentarily, as "mature." But despite the captivating languor and seriousness of this film--a sort of romantic comedy/ghost story as well as an exploration of the relationship between art, life, and death--there is nothing archaic, hardened, or out-of-touch about it. Instead, it is possessed of the kind of open, lively, and yearning visual and narrative sensitivity that one might associate with the romanticism, the insatiable appetite for beauty and meaning--the paradoxically "old-fashioned" values--of youth. 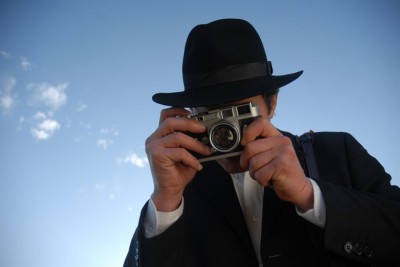 Isaac (Ricardo Trepa, de Oliveira's grandson) is a young resident at a demure, clean, somewhat upscale boardinghouse in the Portuguese river town of Porto. He works as a freelance photographer and causes his solicitous, somewhat busy-bodied landlady, Justina (Adelaide Teixeira), a great deal of quasi-maternal consternation with his moody artistic temperament and irregular schedule. One rainy night, to the accompaniment of the emotional, portentous sound of a Chopin prelude on the soundtrack (one of the film's very few deployments of music), Isaac is summoned to one of the wealthy estates overlooking the town in order to photograph, at her bereaved family's request, the remains of their daughter who has just died, a beautiful young woman called Angelica (Pilar Lopez de Ayala). The departed is aptly named; with her almost sensuously reclined pose, her flowing blonde hair, her peacefully at-rest visage, and her virginally white wedding/funeral gown, hers is as heavenly presence. Isaac is a bit taken aback when, as he captures the lovely deceased in his camera's viewfinder, she nonchalantly opens her eyes as if awakening and flashes him a playful, flirtatious smile. He is the only one to whom her action is visible, and after this startling event, the earnest young photographer is quite literally haunted by the young woman; there are actual flights of fancy, gorgeously conceived and shot by Oliveira and company with what can only be described as organic artifice, in which the young man is visited by his ghostly object of affection and swept up into the celestial night sky for a soaring interlude of oneness and freedom. Isaac never had his feet on the ground, even metaphorically speaking, and now he seems more and more ill at ease in the "real" world as he becomes further and further enamored of his vision of Angelica, whether actual or imagined (the difference hardly matters in this context). 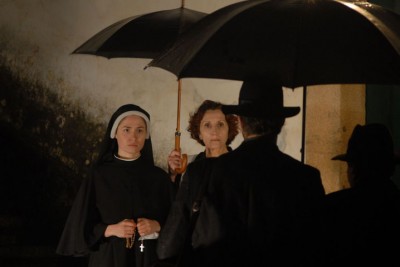 De Oliveira's theme here seems to be the tension between past and present, or between artistic anachronism and literal-minded, businesslike contemporaneity. It is Isaac's elders, the old and distinguished engineer and doctor who also frequent Justina's breakfast table, who are with-it and up-to-date, obsessing gloomily over the economic crisis and pollution; and it is Justina who scolds Isaac for his insistence on taking artistic photos of the manual laborers he spies across the river from his balcony window, working with their hands in an aesthetically pleasing and gratifying way that Justina finds slightly embarrassing for being such a throwback for times she likes to think of as modern. She has always been suspicious of Isaac's bookishness, inwardness, and arty vocation, but she actually begins to take offense as his obsessive preoccupation and distractedness due to Angelica start to pull his head even further up into the clouds, regarding his withdrawal as a possible symptom of insanity.

It does seem true that Isaac is not made for this world, and his visitations from Angelica--in his room from the ceiling of which he has hung his developed photographs of her alongside those of the laborers as a kind of mobile, a protective shrine to the past and his artistic evocation of it--take on an ecstatic aspect, as when an artist is visited by his or her muse; there is a gently metaphorical, timeless quality to de Oliveira's imperturbably measured, unified, naturalistic depiction of Isaac's journey (or evolution, or transfiguration, as one interprets it). A work of art that takes as its subject the creative spirit or the artist's place and role risks becoming self-indulgent or overly esoteric, but that never becomes even the germ of a problem in de Oliveira's capable, unpresumptuous hands. He is a subtle, supple master with his feet firmly planted on the ground and his eyes and ears wide open; like his own apparent muses--Dreyer, Cocteau, Bresson--he restricts himself to the most seemingly basic, straightforward, physically tangible, even mundane materials and then shapes them into something with the ineluctably powerful quality of a religious myth or fairy tale, simple in the telling but profoundly resonant and evocative as we receive it, its mystery and meaning spreading in a ripple effect through our perception as it works a serene magic that, as expertly conjured by an artist of de Oliveira's caliber, feels like the very essence of cinema, its most fundamental and important reason for being.


The film's AVC/MPEG-4-encoded, 1080p-mastered anamorphic widescreen transfer (aspect ratio 1.85:1) is a fantastic example of what a pristine, conscientious preparation of a film for distribution on digital media should look like. Every slight variation of color and shading in de Oliveira and cinematographer Sabine Lancelin's meticulously composed rooms and exteriors (brightly sunlit or darkly rain-drenched) is readily discernible. Blacks are rock-solid, skin tones are unfailingly correct and stable, the celluloid texture is retained to the fullest extent possible, and there are no compression artifacts or digital noise in sight. This is, in short, the best way imaginable to experience The Strange Case of Angelica's exquisite visuals.


Apart from the sparingly used Chopin preludes (which come through incredibly rich and full), this film has one of those quiet, Bressonian soundtracks where every second of silence or sound--however ambient or backgrounded it might be--has been carefully considered, and the DTS Master Audio 5.1 soundtrack immerses us in it all with full clarity, dimensionality, and balance. A truly fine, eminently respectful sound job on the part of The Cinema Guild's team.


--Audio commentary by James Quandt: If you're familiar with any of the critic/Cinematheque Ontario curator's other illuminating work (his video essays on Criterion's Hiroshi Teshigahara box set, his extensive and important writings on Robert Bresson and Apichatpong Weerasethakul), you'll have some idea of what to expect from his feature-length commentary here, and you won't be disappointed. Quandt's speaking style is well-suited to de Oliveira's cinema; he is organized, prepared, and lucidly pedagogic, but his well-articulated and -timed comments are anything but dry, clearly springing from a deep engagement and passionate admiration for de Oliveira's work. Quandt provides an insightful exegesis of what we're looking at and hearing in The Strange Case of Angelica, along with relevant quotes from de Oliveira (speaking on his work and on the cinema in general) and contextualizating information regarding the director's biography and the evolution of his inspirations and aesthetic.

--Douro, Faina Fluvial (Labor on the Douro River). Typical of Cinema Guild's punctiliousness cinephilia, they have included de Oliveira's first film, this short, silent documentary released in 1931, alongside his latest. As Oliveira documents the sights and routines of an ordinary day in the lives of the Portuguese people whose existences are shaped by residing and working on the titular river (in a sort of place-poem that fits well into the "city film" tradition, then very current, of Vertov's Man with A Movie Camera, Vigo's À Propos de Nice, and Siodmak and Ulmer's People on Sunday), his sensibility of the time reveals its roots in Eisensteinian montage that he would shed over the years, but his more perennial aesthetic is also already strongly in play, with its fine visual acuity and a tendency to contemplative, gratifying narrative symmetry. The film has been lovingly restored in order to best display all of its considerable artistry, and is accompanied by an orchestral score recorded for the film in 1934.

--Oliveira the Architect, an hour-long 1993 episode of the French TV series Cinéma de Notre Temps directed by Oliveira's fellow Portuguese auteur Paula Rocha. The two elderly cinéastes meet at Oliveira's house and amble about the Douro River region city of Porto, where Oliveira shot both his first film (Douro, Faina Fluvial; see above) and The Strange Case of Angelica, discussing at a gentle, conversational pace the director's life and his various careers as actor, prizewinning race car driver, and world-class filmmaker. It would have been nice if the interspersed film clips had been identified for those of us not already familiar with de Oliveira's filmography, but the conversation is fascinating; it even includes de Oliveria's recollection of the real-life story upon which The Strange Case of Angelica is based.

--"Absoluto", a 40-minute videotaped interview with de Oliveira in which he reads, in his hesitating, aged voice, from a prepared essay/recollection/diatribe he has written on the past and current state of his beloved medium. His comments, alternatively admonishing and elegiac but always engrossing, are the words of the wise and the experienced to those coming up into a world of cinema he sees as deeply compromised but still holds out hope for, and the message is invaluable; ignore it at your own peril.


Its perfect aesthetic exactitude may the result of the decades that director Manoel de Oliveira has spent honing his craft (his is the longest career in cinematic history) but there is no undue grandiosity to The Strange Case of Angelica. It just has all the focused, elegant, powerful simplicity--the purity--that one might develop as the best possible result of a lifetime spent in the school of cinema. The film's concerns may be the ones that have emerged most strongly for de Oliveira with age--the uneasy relationship between past and present, art and life, love and death--but these are also among the most pressing, profound concerns of human life at any age, and the opportunity to see them probed with such acute restraint, resourcefulness, and subtle intensity makes The Strange Case of Angelica, despite its ultimately ambivalent, possibly tragic suggestion about what it means to be an artist, a deeply life-affirming work of art. Highly Recommended.