Batman: The Brave and the Bold - Season One, Part Two 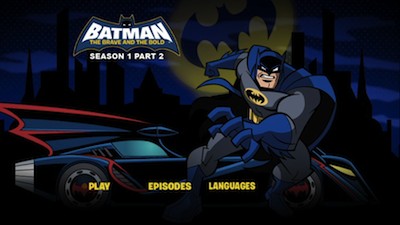 Batman: The Brave and the Bold - Season One, Part Two finishes out the first season of the animated superhero show, and it finds the creative team in excellent form, having hit their stride somewhere in the middle of the previous DVD set. The set-up of the show is simple: pair Batman with other DC heroes for one-shot adventures. It's an old comic book conceit, the idea of a team-up series, and indeed, an old DC comic book series is where Brave and the Bold takes its title from.

I've always been a fan of team-up comics, so this cartoon is right up my alley. It strikes a certain Silver Age nostalgia for me, reminding me of my early teens and getting into comics, prior to the darker 1990s and the enslavement of a once-fun mythos to endless continuity. The Brave and the Bold episodes are just good-time stories where bad guys set up a dangerous scenario and Batman and his ally of the week spend the next half hour dismantling it. Part of the thrill is seeing who the creators pull out of the archives, what comic book character, either classic or contemporary, they'll take from the printed page and put into motion on our TV screens. This season is full of doozies, from more cultish modern heroes like Booster Gold to the animation team satisfying a serious Jack Kirby jones with characters from his Fourth World saga, Kamandi, Demon, and even his One Man Army Corps. We don't get the heavy hitters like Wonder Woman and Superman, most of the characters are more side players like Huntress and Dr. Fate, but they are also of the type that hardcore fans yearn to see getting more attention but who won't likely ever get their own big-budget movie. Brave and the Bold doubles-up most episodes, too, with a show structure that allows for a teaser mini-adventure featuring one team-up before the opening credits, and then a completely different main adventure after.

There are a lot of great episodes in the second half of Season One, though an obvious stand-out is "Legends of the Dark Mite!" Written by Paul Dini, one of the main architects behind Batman: The Animated Series and currently heading up the live action Cartoon Network serial Tower Prep, it pits Batman against his biggest fan, a powerful imp from the Fifth Dimension called Bat-Mite. In a stroke of genius, the show creators have cast Paul Reubens as this mouthy gadfly, and the comedian brings a crazed relish to the performance that pushes what could otherwise be a very minor character into something far more entertaining. Dini is a master of trivia and comic book lore, and so he tosses out quite a few inside jokes and concocts an other-dimensional scenario that allows the animators to riff on vintage Batman art styles, particularly paying homage to Dick Sprang. Smartly, this is not done in a way that will alienate anyone who doesn't get the reference, the same way the opening of "The Color of Revenge!" paying tribute to the 1960s Adam West Batman plays just fine without any foreknowledge of the campy series, but for those who are in on the gag, it's all the better. 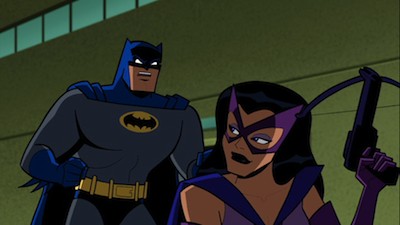 One of my few complaints from reviewing Batman: The Brave and the Bold - Season One, Part One was that there weren't enough ladies represented in the show. Season One, Part Two does a better job of showing gender diversity, with episodes featuring Big Barda, Catwoman, Black Canary, and the Huntress. The Huntress episode stands out for its interplay between Huntress, Batman, and a smitten Blue Beetle (Jaime Reyes version). It's flirty and fun without undermining the character's skill and strength. Unlike, say, Big Barda's cameo simply being her reduced to the punchline of a "grouchy wife" joke.

I prefer the earthbound episodes of the show myself, but for those who like sci-fi or time travel stories, the set leads with a sample of both. The first episode, "Mystery in Space!" sends Batman and Aquaman to Rann to help Adam Strange in an intergalactic war, and the second, "Trials of the Demon!," couples Bats with the rhyming demon Etrigan for a story set in old England. There, they meet Sherlock Holmes and Dr. Watson and we also get the origin of Gentleman Ghost. In another episode, Jonah Hex travels forward into the future to work for Mongul on Warworld (kind of a Westworld parody; also watch for an alien spoofing Kang and Kodos from The Simpsons). On the opposite end, "Last Bat on Earth!" sees the Caped Crusader chasing Gorilla Grodd to the post-apocalyptic future that is home to Kamandi; there, he and the Last Boy on Earth get involved in the war between the Tigermen and the Apemen.

Special mention should be made of the penultimate episode of the set, "Mayhem of the Music Meister!" This surprising installment features Neil Patrick Harris as a villain named Music Meister, whose singing hypnotizes his foes. He uses his voice to lure Black Canary, Green Arrow, Aquaman, Grodd, Black Mantis, and Clock King into a full-on superhero musical. Batman, of course, resists, and so wanders through the scenes trying to stop everyone from singing. It's pretty clever, including dancing supervillains and a wonky origin for the new character. The songs aren't exactly memorable, but they do the job. I also like the way they play out the relationship between Black Canary and Green Arrow. 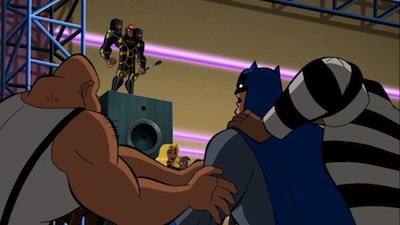 Here is the list of the thirteen episodes featured on Season One, Volume Two (beginning with 14, to match their series numbers):
14. "Mystery in Space!" featuring the Question in the teaser, with a main story guest-starring Aquaman and Adam Strange
15. "Trials of the Demon!", starting with Bats and the original Flash taking on Scarecrow, transitioning to a time-travel story with Jack Kirby's Demon and Batman teaming up with Sherlock Holmes.
16. "Night of the Huntress!" - This is a favorite! Batman and Black Canary best Solomun Grundy, followed by the current Blue Beetle teaming with Batman and a very cool version of the Huntress
17. "Menace of the Conqueror Caveman!": Batman and Wildcat; Booster Gold.
18. "The Color of Revenge!", a two-parter with both segments connected, featuring a younger Robin and then the older independent Robin and an ongoing plot with Crazy Quilt.
19. "Legends of the Dark Mite!": Ace the Bat-Hound and his master vs. Catman; Bat-Mite, with a brief cameo by Green Arrow
20. "Hail the Tornado Tyrant!": Green Arrow returns, plus Joker and Catwoman; a full-length Red Tornado story
21. "Duel of the Double Crossers!": an Outsiders teaser; Jonah Hex and the Dark Knight Detective vs. Mongul and a couple of Apokalips villains
22. "Last Bat on Earth!": a Jack Kirby extravaganza, with a Mr. Miracle and Big Barda teaser, followed by a Kamandi adventure.
23. "When OMAC Attacks!": Hawk & Dove; OMAC
24. "The Fate of Equinox!": both sides of Two-Face, and a full adventure with Dr. Fate.
25. "Mayhem of the Music Meister!": Neil Patrick Harris plays the Music Meister, and the opening is used to set up the fact that this will be a genuine musical, leading into the full villainous plot teaming Batman with Aquaman, Black Canary, and Green Arrow.
26. "Inside the Outsiders!": Green Arrow and Catwoman; the Outsiders

The duality villain Equinox provides some continuity between episodes, first appearing in the teaser for Episode 14 and then being the main focus of what was originally the finale--episode 24 here, but actually broadcast as 26. He's also part of the plot in the OMAC episode. This means that even though each segment stands on its own, the Brave and the Bold creators are also building their own continuity and threading elements through all the shows for those who want to go along with the full adventure. 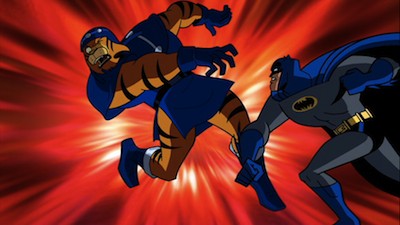 Video:
Batman: Brave and the Bold is broadcast in widescreen and the 1.78:1 anamorphic transfer looks stellar here. Bold, poppy colors, and nice shades of black convey the mood and creativity of the animated series. There are very little digital glitches to speak of, this is really a great looking package.

Episodes can be chosen one at a time, or there is also a play all function.

French and Spanish dubs are offered, as are French subtitles and English closed captioning. 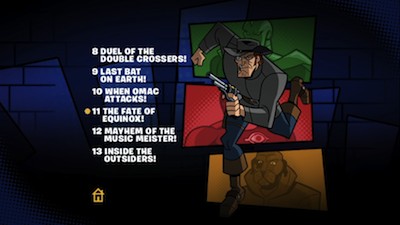 Extras:
Like its predecessor, Batman: The Brave and the Bold - Season One, Part Two is a two-disc set and is packaged in a standard-sized plastic case with a hinged tray and a cardboard slipcover.

There are no on-disc bonus features, unless you count a trailer for some Hot Wheels movie. Yeah, Hot Wheels. When are Shrinky Dinks getting their own movie?

FINAL THOUGHTS:
Batman: The Brave and the Bold - Season One, Part Two comes Highly Recommended. The show has really hit a stride, providing fun superhero adventures that will create nostalgia in older comics fans and introduce a ton of new characters to younger viewers who may have yet to find all the great reading material that awaits them. If you like good superhero action with concise plots and no heavy continuity, Brave and the Bold packs a mighty wallop. 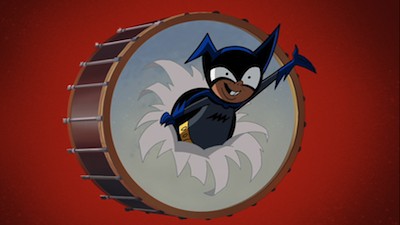