More of the same this second time around...and that means more laughs from this expertly realized sitcom. Shout! Factory, probably the most important name in keeping vintage television alive on DVD, has released Dennis the Menace: Season Two, a five-disc, 38-episode (can you believe that number?) set that encompasses the series' sophomore 1960-1961 season. Extras have been winnowed down to just a few promo spots this time out, but the quality of the shows more than make up for that. 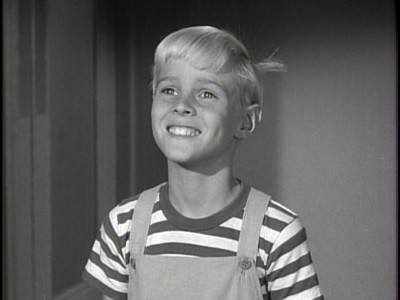 Suburban Hillsdale, America, circa 1960. If you round the bend on Mississippi Street, you won't have to get too close to 627 Elm to hear a strident, "Helloooooooooooo, Mr. Wilson!" called out by little Dennis Mitchell (Jay North). A rambunctious, inquisitive, tow-headed walking disaster zone in stripped shirt and overalls, Dennis means well, but this red-blooded, all-American boy simply can't help but lay down a path of destruction wherever he goes...particularly when he visits "good ol' Mr. Wilson" (Joseph Kearns), the Mitchell's next-door neighbor. Retired to the good life of 1950s suburban America, George Wilson wants nothing more than to putter around his house with his various hobbies, including astronomy, coin collecting and especially his garden, before settling down every afternoon for a quiet snooze on the couch. 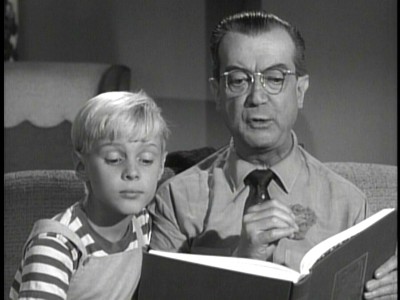 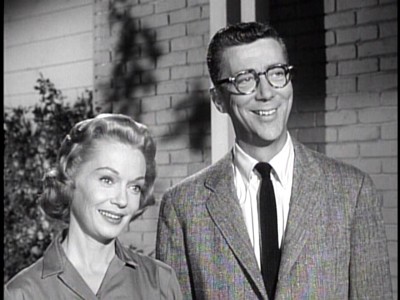 Unfortunately, Mr. Wilson is driven to gulping straight out of his nerve tonic bottle, such is the ruckus caused by hero-worshipping Dennis, who likes Mr. Wilson so much that he's very probably going to kill George with hyper-kindness. George's saintly wife, Martha (Sylvia Field), thinks Dennis a dear, sweet little boy, but even she knows there are times when Dennis shouldn't be around grouchy George...and those are precisely the times that Dennis strikes with completely innocent mayhem. The parents of such a child could rightly apply for sainthood, too; however, engineer Henry Mitchell (Herbert Anderson) and lovely housewife Alice (Gloria Henry), get exasperated with Dennis, as well―until they realize he's just a boy with good intentions...and low impulse control skills. Rounding out the gang are Dennis' good-natured, willing best friend Tommy (Billy Booth), and that "dumb ol' Margaret" Wade (Jeannie Russell), who is forever trying to wrangle a horrified Dennis into playing house as her "husband." 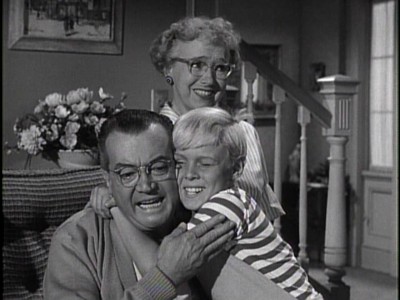 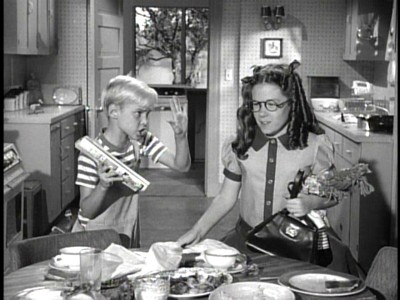 No one was more pleased than I when I realized, while watching this second season of Dennis the Menace, that I wouldn't have very much to write about that would differ from my first season review. And that's because this second offering of episodes is just as assured and humorous as the first one. In many of my other vintage TV reviews, I've written about the "repeatable experience" that was so sought-after by the Big Three networks at this time: creating a show that would dependably deliver the "goods" week after week, with as little variation to the formula as possible, to ensure reliable success―and loyalty―with the audiences. And certainly, for this second season of Dennis the Menace, the show's producer, James Fonda, seems to be sticking to that method. If anything has changed in this go-around, it's an increased focus on keeping Dennis over at Mr. Wilson's, with fewer stories directly involving or centering around his parents―a move that makes sense considering how well North and Kearns work together. Gloria Henry drops out of the series for an extended number of episodes about two-thirds through (she apparently was having a baby), and the producer eases in Kathleen Mulqueen as Henry's mother, with almost no discernable impact on the show's flow. If anything, that's just another indication that Dennis' parents are strictly backup to the program's central stars: Dennis and Mr. Wilson. 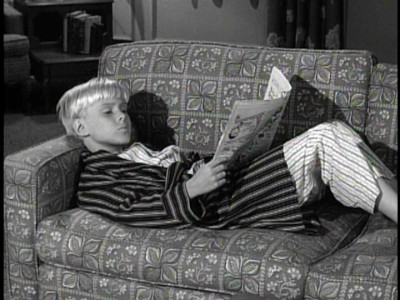 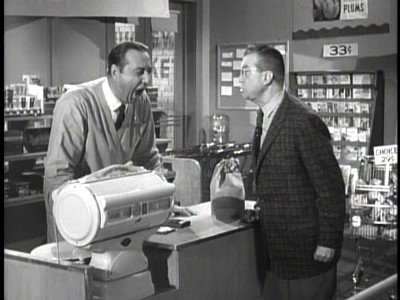 And that relationship is comedy gold. It doesn't get much more elemental than Jay North's insanely chipper, inquisitive, accident-prone Dennis constantly pestering long-suffering, alternately morosely/manically depressed retiree Mr. Wilson until an explosion occurs. That comedy formula is pretty basic...and it works every single time. By now, Kearns and North play off each other like two old vaudeville pros, with exquisite timing and fearless mugging that isn't broad so much as it's mile wide―and yet they both do it without any hesitation. They throw themselves into their roles. And that's where the assuredness of the comedy comes from here (that why some much broad slapstick attempted today feels forced, because you sense the performers are either embarrassed by what they're doing, or contemptuous of the material. They don't really believe in it as a viable comedy form). 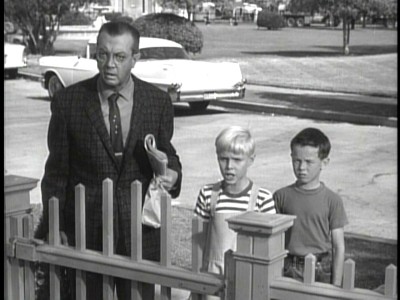 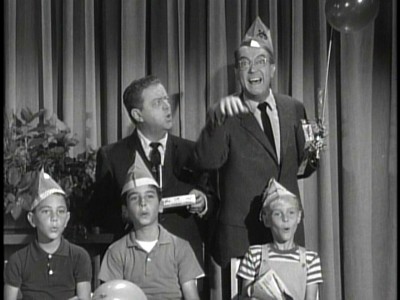 Equally impressive is the continued ingenious plotting of the storylines, these beautifully constructed little comedies of miniscule misunderstandings (usually on Dennis' part...because he wants to hear only what he wants to hear) that build expertly to big pay-offs. Man of the House, scripted by Louella MacFarlane, is a perfect example, with the simple set-up of Dennis minding the house just long enough for his sick mother to lay down for some sleep, snowballing into Dennis buffaloing everyone into doing his chores, including scamming plastic dishware salesman Alan Hewitt (brilliant, as always) into providing a full-course meal, before Mr. Wilson is almost conked on the head as a burglar. The level of scripting is doubly remarkable when you take into account that the writers of Dennis the Menace provided thirty-eight such gems in just one season―a routine feat back in the golden age of network television that would be taken now as a mystical occurrence on the level of the Second Coming in today's puny TV world of 13 episode seasons. 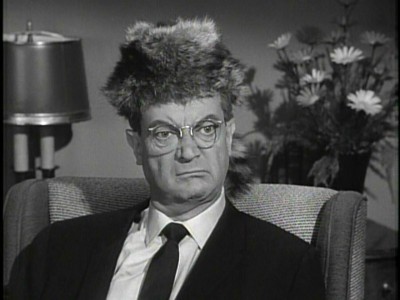 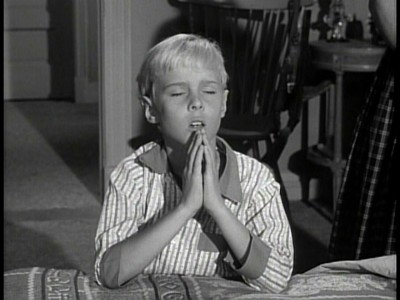 Lovers of vintage TV will also delight in the parade of wonderful supporting comedic actors that routinely pop up here in Dennis the Menace. The handful of semi-regulars, like bluff George Cisar as put-upon Sergeant Mooney, or Great Gildersleeve's Willard Waterman as put-upon grocer Mr. Quigley, or near panic-stricken man-eater Miss Cathcart, played to absolute hilarious perfection by that treasure, Mary Wickes, expand the almost surreal Dennis the Menace universe, where the viewer, fully expecting their encounters with Dennis to go disastrously wrong according to formula, are rewarded time and again with comedic vignettes that are so simple they're brilliant. Add to that appearances by gruff Charles Lane as Mr. Finch, the drug store owner, sly editor Mr. Krinkie (Charles Seel), who loves to skewer pompous Mr. Wilson in his paper every chance he gets, Paul Barselow as Maurice, the TV repairman avoiding Miss Cathcart's desperate love calls, and shady parks commissioner Mr. Thorndyke, played by Charles Watts, as well as one-offs by Larry Haddon as an obnoxious dad (he'll soon be a semi-regular), Ernest Truex as a Christmas tree salesman, Chet Stratton as a bank teller, horse-faced Guy Ramond as a sardonic telephone book warehouseman, Stanly Adams as a crooked coin dealer, and Jon Lormer as a pet store owner, and the vintage TV lover can look forward to solid laughs, episode after episode, from the kind of performers that we just don't see on television anymore. 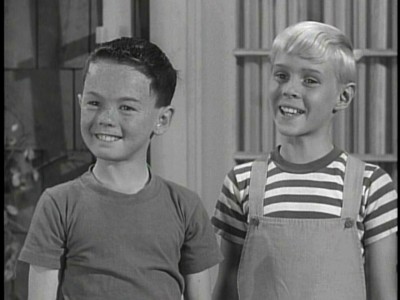 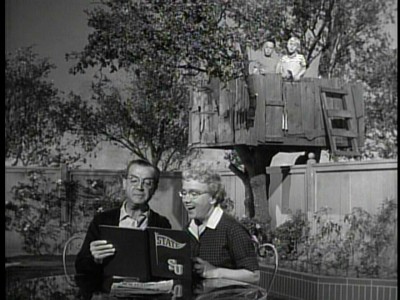 Audiences in 1960 certainly couldn't get enough of Dennis driving his entire neighborhood crazy; Dennis the Menace reached its peak ratings' performance this sophomore season, climbing to a remarkable 11th-most popular show for the entire 1960-1961 season―a feat made more impressive because of the series' branding by CBS as a mere "kiddie" show. Lead-in Lassie may have taken a hit this season from ABC counter-programming Walt Disney Presents at 7:00, but Dennis the Menace faced no real competition from either Maverick on ABC (sans walkout James Garner), nor NBC's ill-advised transformation of Shirley Temple's Storybook into a weekly series. Dennis the Menace wouldn't climb any higher in the ratings during its final two seasons, but it would stay strong...until a death in the cast and Jay North's rapid maturation effectively self-cancelled the show. 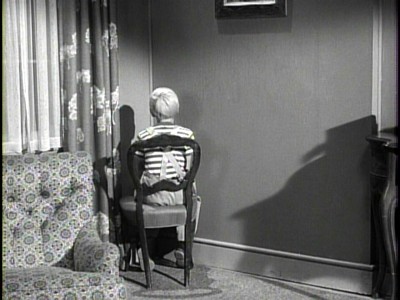 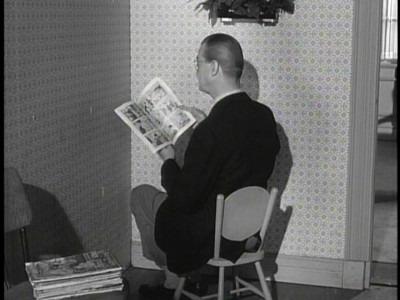 The Video:
The full-frame, 1.37:1 black and white transfers for Dennis the Menace: Season Two vary in quality, from fairly solid original materials, with deep blacks and good gray scales, to slightly blown-out, contrasty episodes with noticeable screen anomalies. Grain is present, but not too distracting.

The Audio:
As well, some of the Dolby Digital English mono audio re-recordings suffer at the hands of the original materials, with fluctuating levels that are noticeable at times. No close-captions or subtitles available.

The Extras:
Only two original promo spots are included here for viewers (think about it: Best Food brands sell Skippy® Peanut Butter and Shinola® Shoe Polish Wax on the same commercial: I guarantee there's some crossover ingredients in those two items....).

Final Thoughts:
Exactly the same as the first season: a witty, perfectly-crafted family sitcom with knockout performances by the two leads and the fine supporting players. Dennis the Menace: Season Two consistently delivers laughs over its amazing 38-episode run, and at this midway point, it's one of the funniest sitcoms of the early 1960s. I highly, highly recommend Dennis the Menace: Season Two.