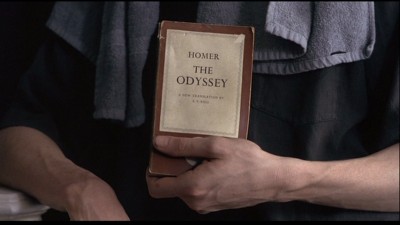 Please Note: The screen captures used here are from the standard-definition DVD released in 2005, not from the Blu-Ray.

We can all come up with examples of the rare kind of great film that, having impressed us upon our first viewing, we are relieved to find does not diminish in greatness when we revisit it. Is it fair or even possible to ask for anything above and beyond that? Having now seen Mike Leigh's Naked a good half-dozen times, I can confidently say that it is a work--perhaps the greatest work of a truly original, masterful filmmaker who has given us a real embarrassment of riches over his career--that continues to reveal more layers of meaning and emotional response with each subsequent viewing, and those previously undiscovered aspects only make it seem that much more of an achievement. In other words, this is a film, one I already admired unequivocally the first time I saw it, whose greatness actually seems to keep increasing over the course of an ongoing engagement with it.

Naked is the story of Johnny (David Thewlis, in a richly deserved Cannes best-actor-winning performance), an overeducated, underemployed, oddly seductive low-life who, after becoming too aggressive during a back-alley sexual encounter, flees from his hometown of Manchester (in the industrial, economically lagging North of England) to London, where he crash-lands at the comparatively luxurious home in which his ex-girlfriend, Louise (Lesley Sharp, The Red Riding Trilogy) rents a room as she works to evolve from a tough, downtrodden Northerner to a London career girl. Her roommate, Sophie (the late, great Katrin Cartlidge, Before the Rain), is a vulnerable, lost character trying, through sarcasm and nihilistic posturing, to protect herself from a cruel and predatory world. In the film's parallel story, a character alternately known as Jeremy or Sebastian (Greg Crutwell) is revealed to be a heightened, exaggerated iteration of the rapacious yuppie; this is something approaching American Psycho-satirical territory, with a mordantly English twist. When Jeremy/Sebastian's insatiable rampaging overlaps with the Johnny/Louise/Sophie love triangle, what was already a fraught, dark situation becomes absolutely nightmarish. 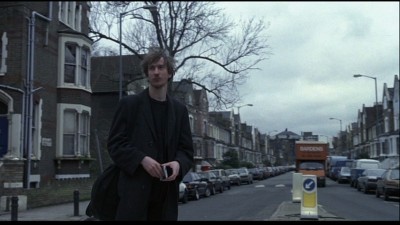 Much of Naked consists of Johnny's "odyssey" (the Homeric inspiration is even made somewhat explicit) into the dark London night as he flees the intolerably claustrophobic emotional tug-of-war between himself, Louise, and Sophie. Johnny is a genuinely fascinating character--equal parts philosopher, idiot savant, dangerous maniac, and sweet naïf. His superlatively well-written and -played interactions with a lost, homeless young Scottish couple (Ewan Bremner and Susan Vidler); a sad, intellectually searching security guard (Peter Wight, Another Year); and a beautiful, generous, but troubled young woman (Gina McKee, Wonderland) take place against the backdrop of the benighted, hellish-looking streets of post-Thatcher (which, in Leigh's terms, means practically post-apocalyptic) London, where the threat of violence is a constant, everyone is in it exclusively for themselves, and the very concept of any truly safe, stable shelter seems to have disappeared. 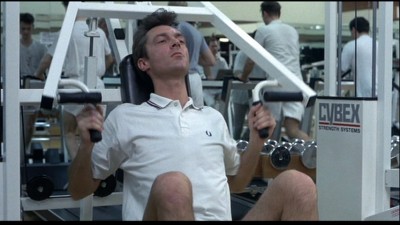 Naked is sometimes described as a dark comedy, and that is probably fair; it is an almost oppressively bleak work, but it is not, ultimately, unequivocally pessimistic, and there are a number of honest laughs to be had as the logorrheic Johnny pontificates and butts up against the world around him. But it is best understood as a cry of rage against the draconian, right-wing, "there is no such thing as society" Thatcherism inflicted upon England during the '80s and early '90s--that is, as a political film, which most of Leigh's films are. That is not at all to say that it is a message film or a didactic pamphlet; its pervasive, brilliantly conveyed sense of betrayal, loss, and powerlessness might have been inspired by its cultural and political moment, but it uses that as a mere starting point to dig deep--truly, all the way down--into more widespread, perennial human concerns: the kindness vs. the unkindness, the defensiveness vs. the vulnerability, the ethical/moral vs. the unethical/immoral always battling it out within our all-too-human natures. 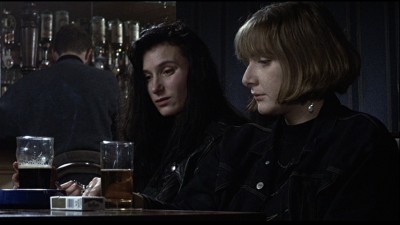 For these politically conscientious reasons, Naked is by far the most violent of Leigh's films; it is specifically notorious for its depictions of sexual violence against women, which has led some commentators to label the film itself nihilistic or misogynistic. But its violence is never, even for a split second, gratuitous; it is painful to witness, which is the hallmark of responsible employment of brutality in a fictional work. (And in this reviewer's opinion, anyone who can watch Sharp, Cartlidge, and Leigh working together in such an acutely sensitive, aware way to expose the particular suffering of women in a climate of sociopolitical regressiveness and still fail to see Naked for precisely the opposite of a "misogynistic" film is not discerning enough to be offering their opinion as valuable to the viewing public.) Naked is actually not really as singular or out of place among the rest of Leigh's œuvre as it might appear. If recent, gentler additions to his filmography, like 2008's Happy-Go-Lucky or last year's Another Year, focus on the problems and responsibilities of meaning to be kind, good people, and manage to pinpoint the quite compelling dramatic conflicts that exist even in much better circumstances, Naked acts as the controlling example of the extremity, the real unbearableness, of what our world so often threatens to become: a place bereft of even the basic fertile soil in which kindness and goodness can take root. 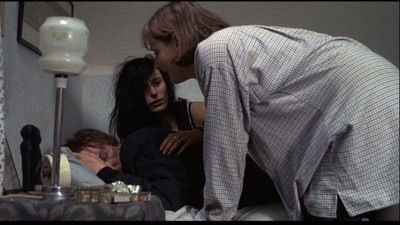 Leigh is legendary for his ability to cast actors and collaboratively create their characters with them, and his work here, in conjunction with that of Thewlis, Sharp, Cartlidge, and the others, is yet another wonderful example of that preternatural talent. But because of the very visible excellence of the writing and performances, the technical virtuosity of Leigh's films can sometimes be overlooked. Viewing Naked multiple times thus serves to leave one in awe not just of the actors and Leigh's writing, but also of Dick Pope's cinematography, Alison Chitty's production design, Lindy Hemming's costumes, and Andrew Dickson's unforgettable, inimitable original score. These elements all work in perfect harmony to allow Naked to burn itself, brilliantly, into your consciousness, and anyone remotely enthusiastic about the movies owes it to themselves to experience Mike Leigh's enduring, galvanizing masterwork.


The high-definition, 1.85:1 aspect ratio presentation conveys, with all clarity and texture intact, each and every detail of cinematographer Dick Pope's brilliantly apt blues, grays, and blacks (all magnificently crisp and solid). Naked is as brilliant visually as it is narratively, and Criterion has, as usual, done a meticulous job on the transfer that lets the film's visuals shine.


The DTS-HD Master Audio soundtrack is beautiful, adding noticeable dimensions to the sound of the previously released DVD. All voices and sound effects are balanced perfectly with Andrew Dickson's score, which has never sounded as rich and immediate (it's really another character in the film) as it does here.


The Blu-Ray edition contains all of the supplements from the original release, and they are fantastic. The biggest prize here is Leigh's 1987 short film, The Short and Curlies, featuring an early performance from Thewlis, playing a young man called Clive, who, like Naked's Johnny, is a wise-ass (though a markedly less acerbic one) who has something clever to say in order to fill any hint of a lull in the conversation. He romances a saucy pharmacy checkout girl, Joy (Sylvestra le Touzel), who compulsively has her hairstyle changed at the hands of her dotty corner hairdresser, Betty (Allison Steadman), another, hysterical nonstop talker. Meanwhile, Betty's daughter, Charlotte (Wendy Nottingham), suffers from being the only quiet, introspective one of the bunch. This short, slighter and less technically masterful than Naked, is funny and sweet, a romantic comedy with its feet firmly planted on the ground. It makes a great, light chaser to the heavier, sometimes overwhelming profundity of the feature.

The extras also feature an amiable half-hour interview, recorded for the BBC series The Art Zone, in which author Will Self hangs out with Leigh at a corner pub and interrogates him, fan to idolized and creator to creator, about his work, with a particular focus on Naked. The set-up is a bit awkward, as is the obviously enthralled and nervous Self, but that just makes the proceedings all the more charming, while Leigh himself is a delightful, modest, articulate, intense yet humorous presence whose generosity of spirit and love for his work make you wish the interview would go on for at least another half-hour. These qualities also come to the fore in Leigh's commentaries, both for Naked and for The Short and Curlies (for the feature, he is joined, rivetingly, by Katrin Cartlidge and David Thewlis, both also very insightful and generous with their recollections and observations).

As external commentary, there is a video appreciation, The heart of the matter: Neil LaBute on Naked, in which the Your Friends & Neighbors auteur gives his take on what it is that makes Leigh, Thewlis, Sharp, Cartlidge, and their film such an artistic success. The accompanying, exquisitely designed booklet features stills from the film and essays by British critic Derek Malcolm and American critic Amy Taubin. 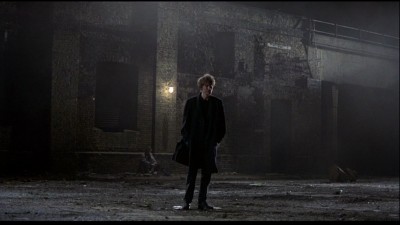 
A searing, practically perfect film, Naked is both profoundly troubling and, in its wonderfully conveyed sense of interest in and empathy for its characters and the crumbling world they live in, exhilarating. It is quite a rare thing to see a film at once so ambitious and so successful in attaining such a complex, nuanced range of emotional and dramatic moods and moments. If you have not yet seen Naked, a high point of its era and of the cinema in general, you should not delay your gratification any further. I, for one, am not hesitating for a moment to give it (and Criterion's exceptional Blu-Ray presentation) the highest possible rating. DVD Talk Collector Series.