Other // Unrated // May 17, 2011
List Price: $19.95 [Buy now and save at Amazon]
Review by Kurt Dahlke | posted April 21, 2011 | E-mail the Author
Brian Eno - 1971 - 1977: The Man Who Fell To Earth:
There may be much more one can do within the documentary format, though I haven't seen it. This Brian Eno documentary doesn't exactly take viewers anywhere new within the format either, yet its subject nearly obliterates that need, and what is done here, interviews and snippets of music, is done with such care and intelligence that I have no problem calling this one of the best music documentaries I've ever seen. The fact that the thing was produced without Eno's authorization, nor his participation, simply underscores the fantastic job this documentary does coming to grips with an artist and instigator so unique, that biographer Dave Sheppard simply says, "He's a singularity." 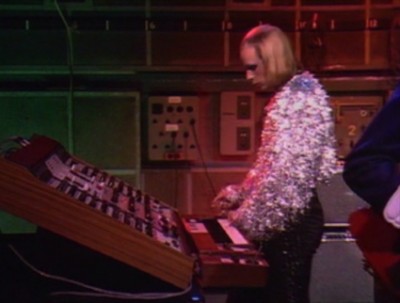 I'll admit, I'm a fan. But I'm not the biggest. I've got the four solo albums encompassed by this documentary's time-line, and a few of his ambient albums, but after watching, it's clear to me that anyone interested in modern rock (or ambient music) has been affected by Eno's influence, whether they know it or not. Among the many things accomplished by this glowing documentary is to point out the seemingly endless stream of genius things Eno made happen in the '70s, including rescuing a floundering David Bowie. Struggling in studio, Bowie had reached a dead end, when Eno suggested flying Robert Fripp in to enliven a track. Now go listen to the song 'Heroes' and just think what that song would be without Fripp's keening guitar presence.

Considering the fact that - other than Eno's personal love affair with expounding on ideas to the intellectual press - very little has been written about the man himself, I really should leave most remaining discovery to go to those who watch this document. This is in fact the first documentary of the polymath, and there should probably be a few more, but at two-and-a-half hours, it never flags. Composed of numerous interviews, some fun vintage clips, and ad hoc music videos, the DVD takes us from Eno's debut with Roxy Music through to his last fractured 'rock album,' Before and After Science. Anecdotes aplenty detail mostly Eno's way of getting things done, and most of these anecdotes are adulatory. It's easy to see why. 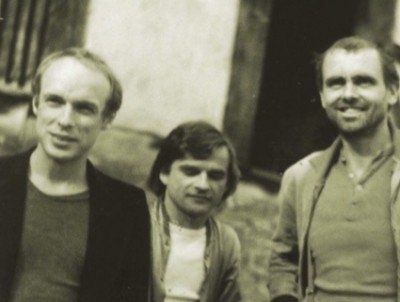 No mistake, this is kind of a one-sided affair, dealing less with Eno as a person and more with Eno as a creative force. Though Eno's dilettantism and actual lack of traditional musical skill is mentioned, it's not really outlined as something that aggravates certain people. However, his amazing talent at shifting paradigms, opening theoretical loopholes, and generally changing any game for the better in a relaxed and friendly manner is a central concept. In fact for someone so heavily lauded, and with every right to be a total dictatorial ass, the two things that come through repeatedly about Eno are that he's relaxed and friendly. Those are two mighty important things in the volatile world of musical and artistic egos, and their importance to Eno's lasting success can't be minimized.

This whole deal becomes even more interesting considering that Sexy Intellectual Records (releaser of this and many other fine music documentaries) has unleashed this with neither the cooperation, nor authorization, of Brian Eno himself. This usually spells doom, signifying a light, trashy, or glancing affair. Though Eno appears briefly in two clips from other earlier interviews, none of the other major players whom you would expect or hope to appear show up. No David Bowie, no Robert Fripp, no Bryan Ferry, not even a Phil Manzenera is on hand. There isn't even a director credit, so we have to thank executive producer Rob Johnstone for not only doing the best with what he could get, but assembling it in a way that makes it far better than the sum of its parts.

A member of the group Cluster, with whom Eno brought ambient music to the masses, speaks fondly and at length. But we also get a nicely comprehensive history of ambient music prior to Eno's involvement. We're given a primer on what was going on when Roxy Music broke, including an education in progressive rock (and why many of those guys were seriously irked by Eno's cheeky non-musician status). What's more, at every pivotal moment, when someone waxes rhapsodic about some important piece or passage of music, we actually get to hear it - try to find that in other unauthorized biographies. Eno's important works are combined with filmed footage (you can spot some pretty famous clips cadged with who-knows-what kind of clearance) to make brief music videos that never before existed. None of these clips go on for more than 30 seconds or so, but they are enough to make you dive for your record collection.

Comprehensive and adulatory, yet at the same time realistic, this a fantastic documentary for Eno fans, and one that should likely convince any doubters to take a closer look at the man. There is such a thorough wealth of information that you'll want to watch the DVD multiple times to enjoy the nuances of all that's said by rock critic Robert Christgau, musicians Jon Hassell, Percy Jones, Hans Joachim Roedelius, and Brian Turrington, or author of the only authorized Eno biography, On Some Faraway Beach, David Sheppard, or Geeta Dayal, author of Brian Eno's Another Green World. (Need I mention, there are plenty more interview subjects.) Brian Eno - 1971 - 1977: The Man Who Fell To Earth amazes, it's a towering effort for fans of modern music.

Video:
This fullframe 4 X 3 presentation of course runs the gamut of video quality. 40-year-old clips of Roxy Music performances sometimes look pretty bad, though many are fine. Still photography is reproduced in the highest quality possible, and contemporary interviews are sharp and full of rich color. Overall, this is a great looking documentary.

Sound:
Digital Stereo Audio is equally fine sounding. Musical snippets reflect source audio quality, but none are degraded or distorted, and all interview audio is clear and easy to understand. You'll want to drag out your albums or CDs to get the full thrill, but this keen sounding presentation will clearly be your catalyst.

Extras:
Extras are scant, but with 154-minutes of feature, what's to complain about? Lloyd Watson on the 801 goes for a four minute trip down memory lane, concerning Eno's third and final flirtation with live performance. Text based Contributor Biographies give you the lowdown on everyone who speaks on camera.

Final Thoughts:
As far as unauthorized music biographies go, this is the one to beat. It helps if you're an Eno fan, but if not, you probably will be by the end of this 154-minute documentary. Using the old standards - interviews, audio clips and archival footage - Eno weaves a truly compelling story of an amazing artist, backing it up every step of the way with musical examples, laudatory stories and more. Such care is taken as to fully explain histories of musical genres in which Eno participates, making this an amazingly thorough biography to boot. If you are a Brian Eno fan, this documentary, even without his involvement nor a bunch of extras, should absolutely be on your shelf, no question. I will accede to the fact that there are music fans who don't like, or don't know Eno, (though this DVD should correct that) so for the general populace I'll give this a Highly Recommended rating.