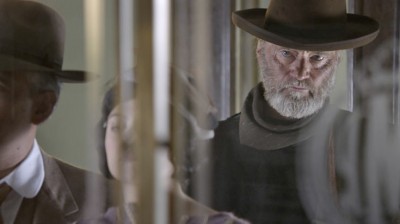 On my way out of the media screening for Mateo Gil's Blackthorn, I overheard someone calling it a "standard Western"--as if that would be a bad thing, if there were any such thing anymore. Making a Western these days is anything but standard; they're enough of a novelty that it's still worth being thankful when we get one, and not dismissing it for being less than a masterwork. Blackthorn, a Spanish production with an international cast, has touches of artsiness and a low-budget offhandedness, but more than anything, it's a good old-fashioned dusty B oater, and more power to it for that.

Miguel Barros's screenplay posits an intriguing notion: let's suppose that Butch Cassidy and the Sundance Kid weren't killed in that famous shoot-out with the Bolivian cavalry. It finds a much older Cassidy, living quietly in Bolivia under the assumed name of Jack Blackthorn; he makes his living as a horse rancher and keeps correspondence with a young man back in America who is probably his son. These days, he's contemplating going back: "There's only two moments in a man's life," he says. "One's when he leaves home, and the other's when he returns." He's got a simple plan for making the journey, but his plans are waylaid by an encounter with a thief (Eduardo Noriega) who becomes his first friend in many, many years.

Cassidy/Blackthorn is played by Sam Shepard, whose presence in a movie like this is the very definition of "reassuring." He gives the character a weary, grizzled impatience; there's not a false note in the performance, which even includes some inspired warbling (both on and off-screen). Noriega makes a fine, enigmatic sidekick; Stephen Rea appears sporadically, but is well-used (and bears more of a resemblance to Bob Dylan with each passing year--or vice versa).

The picture courts trouble with its occasional flashbacks to the younger Butch and Sundance; Uh-oh, I thought to myself, this can't go well. The comparisons to Butch Cassidy and the Sundance Kid are inevitable, and the film can't hope to compete--so the filmmakers wisely choose to play those scenes straight, eschewing the distinctive fastball wit of the earlier picture, and that choice works. Less successful is the rather vague and dreamlike stretch at the end of the second act; the film loses its footing a bit when it gets into the desert, and it feels like there is a scene missing after Shepard and Noriega split.

Those are the complaints; they are minor. Juan Ruiz Anchia's cinematography is lovely yet intimate; the vastness of the picturesque vistas don't overwhelm the small scale of the narrative. The dialogue is mostly low-key as well, though there are some dramatic moments (I can't begrudge any writer the opportunity to have someone yell "Damn you, Butch Cassidy! Damn you!"); the flashes of intimacy--between Blackthorn and his lady love, and between the two new friends--are sensitively played. Blackthorn is a small film, played in a minor key. That is as it should be. But in its own quiet way, it's quite marvelous.