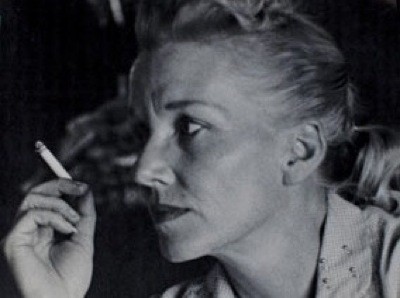 There are people--writers, musicians, actors, filmmakers--who change their art forever, and whose imprint on that art is felt within the world around them, which is indelibly changed. And then there are those who circle in their orbit--the friends, lovers, spouses, protégés--who end up spending their lives functioning as a kind of footnote. They are defined, to many, less by who they are than by who they knew.

Carolyn Cassady is one of those people, and in her very first pre-title interview in the documentary Love Always, Carolyn, she is up front about it. She was married to Neal Cassady and lover to Jack Kerouac, and "that's all the interest is in me," she says, matter-of-factly. "No one has ever cared about anything else." The film, directed by Maria Ramström and Malin Korkeasalo, attempts the tricky feat of caring both about who she knew and who she is, and mostly succeeds.

She met Kerouac, Cassady, and Allen Ginsberg in Denver, where she was getting her MA. She ended up leading them to San Francisco; she got pregnant, and she and Cassady were married. Shortly after their first daughter was born, Cassady abruptly took off on a road trip without her; that trip became the basis of Kerouac's On The Road.

Carolyn tells these stories casually, in intimate interviews shot at her home in England; she seems comfortable with the camera, which accompanies her as she does household chores and fields phone calls and interviews. She folds her old sheets, which both Jack and Neal slept on, "but I can't prove that," she says, "otherwise I could sell them to Johnny Depp for thousands and thousands of dollars." She finds correspondence from Neal, and reads some of it before shuffling it away: "Why would I want to keep reminding myself of that horrible time?" she asks.

And there certainly were horrible times. Neal was, as she diplomatically puts it, "a complicated guy," and it was he who instigated the triangle between the married couple and Kerouac. She was far from promiscuous; molested by her older brother at a shockingly young age, she all but shut down sexually.

That's a big thing to talk about on camera, but that's how close the film gets to its subject; later, as she visits her children in Denver, Ramström and Korkeasalo's cameras capture the family being courted by another crew of filmmakers, hoping to make a documentary about the Beats. The family is all for it, mainly because the filmmakers are explaining how it could make them all some money. (Her son is cheerfully opportunist, yet also realistic about keeping her interests at heart--and keeping her financially stable). But Carolyn isn't interested in doing more interviews; "I have to keep saying the same things," she objects. She wrote a memoir, Off the Road, in an attempt to put an end to all of it, but that, of course, never works. Television interviewers ask her questions about Neal and Jack; she advises them to read the book.

Love Always, Carolyn is a far from comprehensive film; it's rather slight (running a meager 70 minutes) and it flits about a bit, touching on some intriguing subjects (particularly the questions of estate, legacy, and monetizing) without really getting anywhere with them. But as an artifact, it has its pluses (the old home movies are priceless), and as a character study, it is endlessly fascinating.