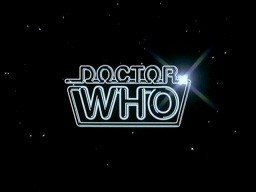 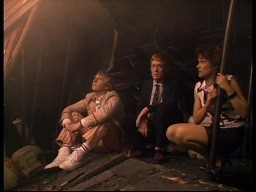 [Reviewer's Note: The following three paragraphs have evolved into my standard overview of Doctor Who from previous write-ups I've done for the original series' DVD releases here at DVD Talk. Doctor Who fans can feel free to scroll down to the next set of images for my thoughts on Frontios itself.] 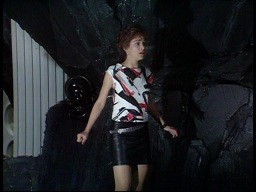 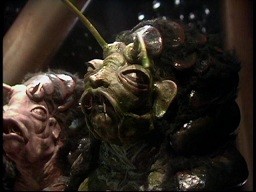 Frontios was a four-episode serial that occurred during the tail end of Peter Davison (The Fifth Doctor)'s tenure on the program. At this point in the show, he is traveling with two companions: Tegan (Janet Fielding) and Turlough (Mark Strickson). Tegan was the mainstay companion of the Fifth Doctor era, appearing in all but the final two serials with Peter Davison, but Turlough was the more interesting character, having initially been placed with the Doctor to serve as his assassin by the evil Black Guardian. Turlough would reform - and his character proved especially intelligent and unpredictable in later stories like this one. As with most of the major Doctor Who cast members from this time period, Mark Strickson would return to further flesh out his character in the long-running Big Finish Productions audio stories of the past decade.

This particular serial is perhaps most memorable for its villains: the Tractators. The Tractators were not as spectacularly campy as the Fifth Doctor foe the Mara (which appeared as a giant balloon snake in the climactic battles of both stories) in the storylines Kinda and Snakedance, but the mollusk-like Tractators are fairly close, being unconvincingly realized via rubber suits. Like the Mara, the Tractators would prove to be a menace unique to the Peter Davison era (at least on TV - more on this at the end of the review). Outside of the creatures and its really cool pulp sci-fi title, Frontios proves to be an otherwise standard and routine Doctor Who runaround, filled with clichés familiar to fans of this series.

Frontios is set in the far future after a cataclysmic event has scattered the remnants of humanity into deep space. One of the last remaining human colonies, having crash-landed on the titular planet, is barely surviving. People are being inexplicably pulled underground while meteorite storms pummel the surface. The TARDIS, early in the first episode, is pulled into Frontios by an unexplained force and breaks apart, apparently stranding The Doctor, Tegan, and Turlough in the middle of the unrest occurring amongst the colonists as their situation grows dire.

The series' regulars are in top form as the mystery of Frontios and its underground dwellers the Tractators evolve. Davison seems comfortable as the Doctor, and sports a professorial pair of spectacles that suit him (David Tennant would utilize a similar prop from time to time as the Tenth Doctor). Strickson and Fielding are fine in their respective roles as the companions, although Fielding is costumed in a punk pop outfit that looks like a gaudy relic of the '80s from a contemporary perspective. And I have to say, the concept behind the Tractators and their "evil" plan is suitably fun - and their ghoulish appropriation of humans in that plan is sinister even if it's goofily realized on screen.

However, the running around and people getting captured and then escaping routines become worn out over these episodes. The human colony also seems interchangeable with other future human colonies utilized in Doctor Who stories, especially in its emphasis on the military and the scientific community. Curiously, in addition, I'm not sure why the Doctor is suddenly concerned about his home race The Time Lords finding out about his interventions on Frontios - intervention is something he does in every other serial, after all.

Since I grew up with this series, perhaps I'm not the best person to judge these episodes. I'll admit feeling a bit nostalgic, as it's been a couple decades since I last watched the Davison episodes of Doctor Who. Frontios is not the best place to start for new fans, but it is vintage Doctor Who from the 1980s - and given the DVD's plentiful extras, I'll go with a Recommended rating.

One final note: Christopher H. Bidmead, the writer of Frontios, penned another Doctor Who adventure featuring the Tractators for the Sixth Doctor, Colin Baker. It was never produced for the small screen, but it would ultimately be performed in 2010 as a full-cast audio drama starring Colin Baker and Nicola Bryant as companion Peri by Big Finish Productions. Titled The Hollows of Time, it's available here. 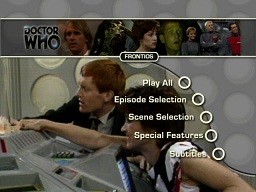 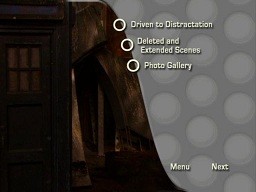 2 Entertain's cover art for Frontios advertises "digitally remastered pictures [sic] and sound quality." The visual and audio quality are nearly identical to the recently released (on DVD) Peter Davison serials Kinda and Snakedance. The episodes of Doctor Who: Frontios are presented in a full frame 4:3 aspect ratio that reflects its original television broadcast. The image looks as good as I've ever seen it with solid colors and okay detail - don't expect stellar blu-ray visual quality here, however, given the show's 1980s video production roots.

The lone audio track (excluding the extras delineated below) is a straightforward English language mono affair - described as "Dual Mono" on the cover art. Sure, it doesn't have a surround sonic punch, but the track is still serviceable. An optional English language subtitle track for the hard of hearing is also provided.

Considering that Frontios represents only four episodes of one season of a television show, this DVD release - like all vintage Doctor Who home video packages - comes loaded with a comparative feast of extras.

To me, commentary tracks tend to be the most insightful extras on a DVD. Here, actors Peter Davison, Jeff Rawle, and John Gillett along with script editor Eric Saward and special sounds designer Dick Mills provide a congenially informative commentary over all four episodes. Plus, an additional option offers an isolated music score through each episode. If the idea of plowing through these alone doesn't appeal, then select the optional Info Text and listen to one of the previous extras while reading subtitles that provide thorough background on the production of Frontios.

Driven to Distractation (32:51) is the pun title for an informational documentary on the making of Frontios with the participation of cast and crew. This is presented in anamorphic widescreen.

And, as always, historical material is made available. This includes Deleted and Extended Scenes (15:37) that are in rough cut form. In addition, Photo Gallery (5:22) streams stills from the show set to the episodes' score. And, the Radio Times Listings appear under PDF materials.

And then, finally, there's the promotional content. Coming Soon (1:45) shows clips from other Doctor Who episodes upcoming on DVD. Commercials for the first Doctor Who season starring Matt Smith and the cable channel BBC America, it should also be noted, precede the main menu.

Despite its comically realized foe, Frontios is a fairly routine future-set Doctor Who runaround from the tail end of Peter Davison's tenure in the role of the Doctor. That's not necessarily a bad thing, but the serial isn't the most memorable entry from the series during the 1980s. Given the DVD's bountiful extras, though, I'll go with a "Recommended" DVD Talk rating.