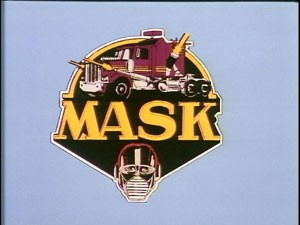 
The Show
I'm all but certain if you showed me any '80s Transformer or G.I. Joe character I could give you not only their name but they're specialty as well, whether it's Perceptor the microscope or Big Ben, the British Real American Hero. But the members of MASK, the Mobile Armored Strike Kommand? I know more members of N'Sync. I simply don't have a very strong recollection of the show for some reason (probably because it only lasted a year, and didn't air five days a week after school.) But the toys? Oh, the glorious memories I have of those transforming vehicles, with their relatively tiny drivers and their equally tiny helmets (which I invariably lost.) That's the main reason I was excited to revisit the concept when I heard these DVDs were being released. It was interesting to approach a series that's both loaded with and free of nostalgia for me.

The show is quite formulaic, as each episode sees the bad guys of the evil syndicate V.E.N.O.M., led by would-be-played-by-Dabney-Coleman-in-real-life villain Miles Mayhem, pull off some crime, which leads Matt Trakker's MASK team to spring into action. Gathering a team selected by his computer Spectrum, Trakker and his specialized crew, outfitted with transforming vehicles and superpowered helmets (identical to the baddies,) track down the enemy, stop them, but fall short of capturing them, allowing the two sides to fight another day. Though you know what's coming, right down to the cheesy bumpers (which were thankfully left in) and the G.I. Joe-like PSA sign-off at the end, each show has the feel of an action B-movie, and crafts some decent plots, even if some of them come back repeatedly. How often is V.E.N.O.M. going to try and take advantage of a indigent tribe by pretending to be a god? 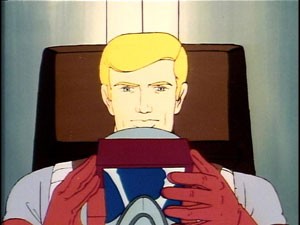 I have a deep fondness for the toys, but I fully admit, this show just doesn't work the way other series of the era do. Though the concepts of the transforming vehicles, team members with specialized skills and the powerful masks are certainly engaging, there's so much about the show that just drags it down. The general pacing is tremendously slow, especially when Trakker is gathering his team (which includes a rundown of each person's name, specialty, and vehicle, before they leave their jobs to sit around a table, waiting for the masks to lower from the ceiling), while the actual implementation of the masks is dramatically awkward, as they have to speak to fire their weapon (which kind of kills the excitement, a fact proven by the fun vehicle battles.) The scripts and/or voice work is just OK, but there are some over-the-top annoyances, like the bad Jack Nicholson imitator behind the Stiletto mask or the stereotypical voice on the Asian guy Bruce, with his Confucius-style words of wisdom. Some of the performances are just painful, with odd delivery punctuated by random pauses or an utter lack of emotion. Meanwhile, the less said about Trakker's son Scott and his robot sidekick T-bob, the better, as they serve mainly to traffic in lame gags when Scott isn't being kidnapped, over and over again, either starting the plot, or furthering it in predictable fashion.

The animation, which cribs liberally from old-school anime, is actually pretty good, especially in the design of the masks and vehicles, but the writing is a definite weakness (which must be a secret shame for Big Bang Theory's Chuck Lorre, part of the staff here.) Though kids will probably enjoy Scott and his robot's silliness and all the action, the show is not easy to follow. There may be a lot of Transformers and a lot of Joes, but you knew each by a name, like Bumblebee or Stalker. Here, each team member would have their name, multiple masks and their names and their multiple vehicles' names. Multiple that by about 20 characters and it's almost impossible to keep them all straight, and

The international scope of the stories might go over kids' heads a bit as well. When was the last time a kids action show had an entire episode built around the Lipizzaner Stallions. Seriously? Yet, they'll struggle to appeal too much to adults as well, because they just don't make a lot of sense. For such an evil group, V.E.N.O.M. sure thinks small, trading mainly in theft, extortion and slavery? And they are rather dumb, considering they can't figure out that Trakker is the leader of MASK, despite the two similarly-built gentlemen, who hang out with a young boy and a robot, drive the same exact gull-wing car. And can't this multi-millionaire afford a nanny or a boarding school, considering how often his kid's life is put at risk? While we're asking questions, why does V.E.N.O.M. only attack locations near Trakker. This is definitely the kind of show that requires you to grab a bowl of sugary cereal, shut your brain off and just sink into that incredibly catchy theme song. "Ma-ma-ma-MASK!"

Please be aware that though the box says it's "The Complete Series," there are 10 episodes not included here, from the show's brief second season, where the series focused on racing. Oddly, Cookie Jar Animation (DIC's descendant) held onto the rights to those few episodes and Shout! Factory probably thought people might not pony up the cost for a single "season" set of 12 DVDs, but might for a complete series. You could make the argument that the second series is a different show, but it's still a bit misleading. 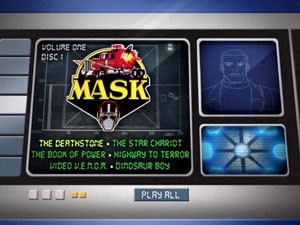 The Discs
This has to be one of the densest DVD sets I've ever seen, with twelve DVDs crammed into the space of two slipcased, clear, single-width keepcases (each with two dual-sided trays and two outer hubs.) The discs have five or six episodes each, and feature animated full-frame menus with options to select episodes, play all the shows on a disc or check out the extras (where applicable.) There are no subtitles, no audio options and no closed captioning.

The Quality
If you've been watching MASK via YouTube uploads, these full-frame transfers look a lot better, but the quality is relative, considering the muted colors and the amount of dirt, scratches, odd vertical textures, digital artifacts and weird effects along the edges of the image colors. The quality improves a touch as the set moves on, and I've certainly seen worse (*cough*millcreek*cough*,) but be assured, if you compare this with Shout! Factory's Transformers and G.I. Joe releases, you're going to be disappointed.

The Dolby Digital 2.0 track couldn't be simpler, pushing everything out evenly, though the funky '80s jams that make up the score (mainly reprises on the main theme) and the wide variety of sound effects come off crystal clear. It's a fine, though limited effort.

The second featurette, "Saturday Morning Krusaders," is longer (21 minutes) and a lot more irreverent, as fans of the series, including some comics and filmmakers (the best known being MADtv's Eric Price), talk about the show, in a way not un-reminiscent of I Love the '80s.. If you know the show, the discussion is pretty funny, as they hit on pretty much all the problems with the show, but in the loving way that only fans can offer. 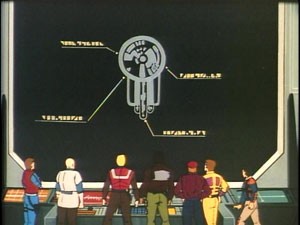 The Bottom Line
I wanted to like MASK far more than I actually did, but then, I'm no longer a little kid, and this show was not made for the 2011 version of me. That said, if you like cheesy action B-movies, there's 65 short ones in this set to enjoy, and for fans of the show, the nostalgia factor can be hard to ignore. The quality may not be so hot, but at least there are a couple of fine extras to check out, and the overall package is well-done, so fans should be happy that Shout! Factory has finally brought this series to DVD.