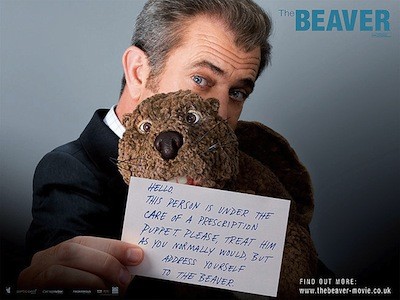 I know that the trailer for the new Mel Gibson movie, The Beaver, looks like something cooked up by a late-night sketch comedy show, but let me assure you, it's very real. The Jodie Foster-directed picture is exactly what they show you: a blackly comic drama about a family man whose depression overtakes him to the point where he can only effectively communicate through a beaver hand puppet. And the Beaver, as he wants to be called, speaks with a rough British accent. It's that insane of a concept, and the movie is alternately as bizarre as you might expect and strangely conventional. It also gets a lot darker than I imagined it would. The Beaver is one whackjob of a mainstream motion picture.

Gibson's character is Walter Black, the CEO of a toy company he inherited from his father, a man that had his own demons. Depression, it would seem, runs in the genes, and Walter has been sidelined by a crippling sadness. He sleeps all the time, and as a result, his home life and work have both suffered. Having had enough, his wife Meredith (Foster pulling double-duty) has finally kicked him out of the house. She has two boys to raise. The youngest, Henry (Riley Thomas Stewart), is a quiet boy who keeps to himself and has trouble with bullies during recess. The oldest, Porter (Star Trek's Anton Yelchin), is a Senior in high school who hustles cash by selling top-notch term papers. He is deathly afraid of becoming his father, so much so that he keeps notes and charts on the old man's traits and behaviors that he sees in himself. If he can identify the trouble early, he might be able to cast it aside.

Out on his own, Walter goes on a bender, and when throwing away some of his belongings, he spots the beaver puppet in the dumpster. He takes it back to his hotel, gets blotto watching a Kung-Fu rerun, and knocks himself out. When he wakes up, the persona of the Beaver is born. Walter submits to this new identity, letting the buck-toothed animal get out in front of his problems so he can take charge of his business and his family. Foster and Gibson, working from an original script by Kyle Killen, don't stage this as a light farce where everyone accepts that the Beaver is real. Gibson doesn't even do a ventriloquist act, he is clearly saying everything the Beaver is saying. Instead, he presents this as a version of therapy, calling it a "prescription puppet," a device that will allow him some distance from his problems. 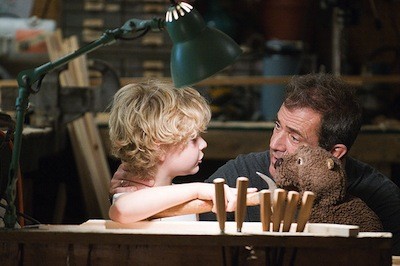 I don't know if there is any valid psychology in this, but there doesn't really have to be. The device works surprisingly well, and it does so largely because Gibson wholly commits to the routine and never condescends to make it a joke. Walter is a profoundly sad man, and for whatever armchair psychiatry that pops up during the course of The Beaver, the scenes where he is alone with his gloominess capture all the mundane heartbreak of the disease. There is no romanticizing depression. It's not a flashy mental illness. It is slow, gray death, and how Foster and Killen handle it lends The Beaver true gravity despite the outlandish premise of the film. It's also a testament to Gibson's skill as an actor that he mostly made me forget about his unsavory off-screen presence. I believe in judging the artist for his art and not his personal life, and I feel it's justifiable to see movies when Mel Gibson is a performer even if I have problems giving money to ones that he directs; that said, The Beaver is ill-timed. Gibson's real-life outbursts loom large.

As The Beaver progresses, the narrative takes some surprising and gruesome directions. It also heads to some rather familiar, hackneyed territory. Walter's success as the Beaver is a little hard to believe and made no more credible by Foster's tendency to shorthand the scenes where Walter is making real growth. The film has no internal sense of time. It feels like only days have passed, but it would take months for Walter to accomplish what he does, particularly with his toy business. At the same time, if months really did pass, then the side plot of Porter having a developing relationship with the school hottie, Norah (Jennifer Lawrence, Winter's Bone), would be the slowest adolescent romance of all time. Where's the hormonal urgency? 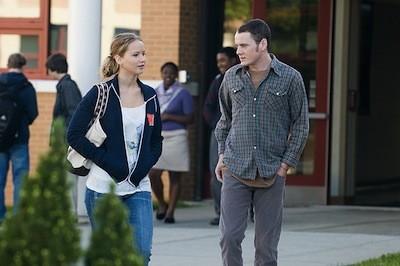 Yelchin and Lawrence actually get a lot of the best scenes in The Beaver, and they mostly stay away from the puppet. The two young actors have real chemistry, and Killen writes stronger internal lives for both of them than he does the adult characters. Past tragedy has compelled Norah to tamp down all of her feelings in favor of a rigid life of academic excellence. She is the cheerleader and the valedictorian, but her inability to express herself has forced her to go to Porter to write her graduation speech. Porter's daddy issues allow him to understand the girl far more than she'd ever have expected. The boy's troubles have an immediacy that Walter's does not. Maybe it's because the older man has given up the fight, and Porter is still in there swinging.

Despite its narrative shakiness, The Beaver is a fascinating movie. Its biggest problem is that it's a film that, deep down, needs to entirely follow its own beat. Somewhere along the way, somebody decided to play it safe and massage the material to give it at least the semblance of mainstream appeal. Whoever made that choice has probably been kicking him or herself since Gibson's legal travails torpedoed The Beaver's chances of achieving any real success. Then again, I'm not sure it would have mattered either way; Mel Gibson with a hand puppet would have been a tough sell regardless. Going full gonzo with it could have made a real difference at least to the movie's defenders, who could celebrate how far off the wall The Beaver had gone, rather than apologize for the wishy washiness that sometimes threatens to wash it all away.