The Criterion Collection // Unrated // August 16, 2011
List Price: $39.95 [Buy now and save at Amazon]
Review by Stuart Galbraith IV | posted August 27, 2011 | E-mail the Author
I think Criterion erred slightly with what otherwise is a marvelous Blu-ray of Stanley Kubrick's great caper-noir The Killing (1956). That's because it's really a double-feature set, two films for the price of one. Yet the consumer has to squint at the long list of extra features on the back of the box before realizing that this disc also includes the movie Kubrick made just prior to The Killing: Killer's Kiss (1955). Though Killer's Kiss is low-budget and even crude and amateurish in many ways, the two pictures are very much a matched set, like bookends filmed on opposite coasts and reflecting the time and places in which they were made, and of Kubrick at this early stage of his career.

Killer's Kiss even comes with its own set of extra features, notably an appreciation by critic Geoffrey O'Brien that pegs its attributes while acknowledging its shortcomings. The Killing's supplements include a fascinating interview with Sterling Hayden done for French television, an enlightening one with producer James B. Harris, and an interesting one with writer Robert Polito about novelist Jim Thompson's contributions to the script and Kubrick's controversial downplaying of same. The transfers of both movies are great, too. 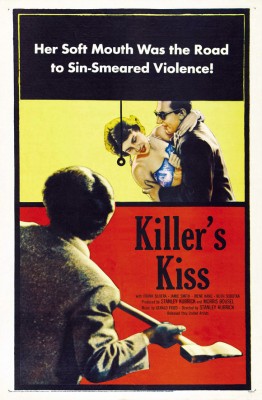 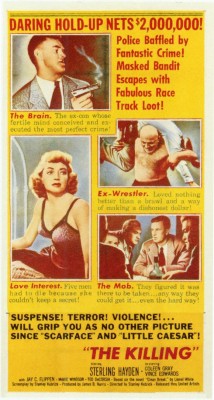 The short, 67-minute picture is light on plot; Kubrick co-wrote it with Howard Sackler, as well as photographing, editing, directing, and co-producing it. Nothing very much happens and it all too clearly is built around a couple of set-pieces, such as the climatic confrontation between Davey and Vincent at a mannequin factory (a clever setting), as well as Kubrick's obvious interests in mixing conventional noir elements with innovative, proto-cinéma vérité footage of Manhattan in all its seedy glory. Other Kubrickisms - his fascination with mirrors and mirror images, alternate spatial and time perspectives, etc. - are present even this early on, when the director was barely 26 years old.

And indeed, for its New York footage alone Killer's Kiss is a fascinating document, with "stolen" footage shot aboard a subway, at the long-lost Penn Station (torn down in 1963), and especially Times Square, with its (especially in high-def) crystal-clear signage promoting Himberama (featuring magician Richard Himber, the "-rama" an obvious riff on the sensationally popular Cinerama), and movie theaters showing new movies, revivals (including Cagney's Public Enemy), and newsreels. During these scenes Killer's Kiss strongly reflects Kubrick's years as a still photographer for Look, a job he began while still a teenager.

Produced for just $40,000, Killer's Kiss is nonetheless dirt-cheap and looks it. Kubrick began shooting with live sound but then opted to film everything MOS because of the greater freedom it gave his camera and lights. But it's also painfully obvious that everything's been looped post-production and the soundtrack is crude at best. The sound effect of boxers punching bags or one another is surreally inapt, more like distant celebratory gunfire outside Tripoli. On the subway Davey reads a letter from his "Uncle George," heard in voice-over, but the person dubbing the twangy drawl is clearly no actor.

One of the few bona fide acting talents in Killer's Kiss is Frank Silvera, and his presence lends the picture a fascination rarely if ever mentioned in other writings about the film. Silvera often played parts like his Italian gangster in this, at other times playing Spaniards, Mexican Indians, and in the 1962 Mutiny on the Bounty, a Polynesian. But Silvera was in fact a light-skinned African-American. It was the damndest thing: at a time when black and white entertainers weren't even allowed to hold hands on TV shows, here's Silvera planting kisses on Chris Chase, a white woman, in a nationally-distributed American film, perhaps the first such instance.* Silvera literally passed for white, and throughout his amazing career no one batted an eye when, for instance, Silvera played the father of Ben Gazzara and Anthony Franciosa on Broadway, or John Marley's brother in an episode of Thriller. He deserves to be better known outside the African-American acting community.

The Killing is basically Huston's The Asphalt Jungle (1950) - with Sterling Hayden top-lining both, not coincidentally - but with a twist. As in Lionel White's original novel, Clean Break, there's a Rashomon-like multi-perspective approach. The daring racetrack robbery is shown again and again, from several different perspectives, shifting spatially but also backwards and forwards in time. I readily confess that the first time I saw The Killing, at a revival house in the early-1980s, halfway through I bolted from my seat to go yell at the projectionist for mixing up the reels. Little did I know.

The other thing separating The Killing from other caper-noir is that, in films like The Asphalt Jungle, there's always the feeling that the ingenious scheme could come off, that the sympathetic thieves might just get away with the loot. (And, invariably, some absurdly trivial, painfully ironic trifle blows it all.) Watching The Killing for the first time in many years, I was struck by how from almost the very beginning it's clear this den of thieves hasn't got a prayer, that it all begins to unravel before it's even begun.

The film was produced on a B-movie budget of $330,000, some of which was well spent on its ensemble cast. The underrated, irreplaceable Hayden, more about whom later, is great, but it's the supporting cast everyone remembers, especially Marie Windsor as one of the most unscrupulous, vulgar (she spits into her mascara brush), least-faithful wives in screen history; and Elisa Cook, Jr. as her poor dumb schlub of a husband. Actors who made careers out of playing backbiting weasels and thugs come off remarkably sympathetic here. Besides Cook there's Joe Sawyer, perennial bad influence to Humphrey Bogart, George Raft, and James Cagney in innumerable Warner Bros. movies, in The Killing playing a doting husband comforting a bedridden wife. And Jay C. Flippen, whose creepy face made even his good guys appear sinister, is the self-deprecating alky bankrolling the operation. (I might have missed something but just why does he turn up at the racetrack during the heist?) The Hawaiian-sounding but Georgian-born professional wrestler Kola Kwariani has a pivotal role in the film, and was almost certainly cast because he was also a professional chess player, a shared lifelong passion of Kubrick's. He looks a lot like Tor Johnson, and if anything Kwariani's accent is even more impenetrable. It's amazing that his voice wasn't dubbed.

Despite a poor musical score - as with Killer's Kiss it's once again by Gerald Fried (no wonder Kubrick later preferred classical themes) - The Killing is just about perfect. And like Killer's Kiss there's a racial element I've always wondered about. Timothy Carey, deliriously (and typically) eccentric as a shooter Hayden's ringleader hires to create a diversion on the racetrack, is nearly thwarted by a well-meaning black parking attendant, played by James Edwards (Home of the Brave, The Manchurian Candidate). To get rid of the guy Carey invokes the "n-word." It's a real shock when Carey says it, and I'm not aware of an American movie before it to use it in such an intentionally derogatory fashion.

Both pictures, in black and white, look great. Killer's Kiss is presented in 1.37:1 full frame, quite unusual for a 1955 release, though it seems correct. The movies seen playing in Times Square - How to Marry a Millionaire, The Man Between, The Queen of Sheba, Beachhead - suggest Kubrick shot those scenes in early-1954, just as cropped widescreen was becoming the standard for non-scope films. Plus his framing is clearly meant for 1.37:1 even if United Artists' titles suggest it may have been shown in some markets at 1.66:1. The Killing is itself in 1.66:1 format, and like Killer's Kiss the added extreme clarity really gives both films an immediacy heretofore limited to pristine 35mm presentations. I hesitate trotting out the old cliché that they look like they were filmed yesterday, but in these instances the cliché really applies. Both are presented on a single BD-50, region "A" encoded disc. The mono audio is fine, and supported by optional English subtitles.

Besides the aforementioned appreciation of Killer's Kiss, the Blu-ray also includes a revealing interview with Sterling Hayden. (Another, equally fascinating one by The Tomorrow Show's Tom Snyder is available on YouTube.) He talks about the Blacklist, sailing, living in San Francisco, Joan Crawford (great story, that), and working with Kubrick on both The Killing and Dr. Strangelove, telling a particularly touching anecdote about the latter. Hayden is one of screendom's most fascinating characters, offscreen so fidgety with nervous energy and willing to lay bare his soul yet best-known for playing stoic, enigmatic types - what a contradiction! The James B. Harris is more nuts-and-bolts about Kubrick's early films and Harris's relationship with Kubrick, but it's equally fascinating, while the Jim Thompson piece paints a less-than-flattering image of Kubrick as something of a credit hog. Trailers for both pictures are included.

The Killing especially holds up extremely well even today. It has barely dated at all. This is a wonderful package of material headlined by two excellent high-def transfers, and one of the year's best releases. A DVD Talk Collector Series title.