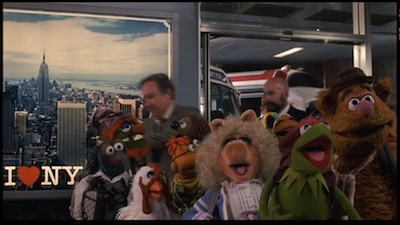 The Muppets Take Manhattan is the third entry in the cinematic adventures of Jim Henson's troupe of colorful puppets, and while not a terrible film, it is proof that you can go back to the well too many times.

Released in 1984, The Muppets Take Manhattan was directed by Muppets-mainstay Frank Oz, who is of course also one of the puppeteers, playing Fozzie, Miss Piggy, Animal, and others. Oz and co-writers Henson, Tom Pratchett, and Jay Tarses are paying tribute to movie musicals of old. Kermit the Frog and the gang are graduating college at the start of the picture, capping their academic career with an original song-and-dance revue written by Kermit. The response to "Manhattan Melodies" inspires the animal collective to head to New York with dreams of putting the show on Broadway. Naturally, things don't go well, and the team disperses, heading off to parts unknown and leaving Kermit to strive on his own. The best sequences of the film are when the absent Muppets write Kermit letters to let him know what they are up to, and we get brief glimpses of their new lives: Rowlf the dog as innkeeper for a dog kennel, Fozzie living with "real" bears, and Gonzo taking his chickens and trying for an Evel Knievel routine at a water park. The laughs are quick, but worth it.

Not so much for the Big Apple story. Kermit tries various schemes to spread the word around New York that he has the next big thing. He works as a dishwasher and is aided by the daughter of the café owner, a bland girl with dreams of being a fashion designer (Juliana Donald). Miss Piggy has stayed behind because she's jealous, and she misconstrues the frog's new relationship and hijinks ensue. Meanwhile, Kermit finds a producer (Lonny Price), only to get hit by a car and get amnesia. 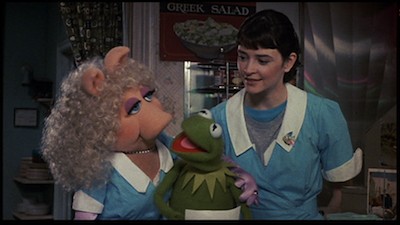 While I am fine with the familiarity of the movie musical plot, what kind of drags about Muppets Take Manhattan is that there is already a Muppet film about the guys traveling to the big city to make their way as entertainers: the far superior Muppet Movie. Manhattan is too reliant on that earlier film's more successful formula. The gang getting scattered near and far, Miss Piggy's troubled and delusional road to the altar, and the cameos by famous stars (in this case, Brooke Shields, Elliott Gould, Joan Rivers, James Coco, and Art Carney, among others) are tried and true elements of the Muppets canon, to be sure, but there is no real spark to The Muppets Take Manhattan, this old ground has been plowed. The team seems to be playing it safe, lacking any of the satirical edge that highlights their best material and missing any memorable songs. Jeff Moss, a regular down on Sesame Street, composed all the tunes, and there isn't a toe-tapper among them. The closest is the Muppet Babies number, but that might be more for the surprise of seeing the mini versions of our favorite characters (this was their first appearance) rather than Moss' work.

There isn't really much more to say about The Muppets Take Manhattan. It is what it is, a three-quel full of hedged bets and recognizable components. It's clear that the Muppet crew wanted to capture what everyone loved so much about the first Muppet Movie, but they've gotten so far away from that original inspiration, it's now just a repetitive exercise rather than a genuine moviegoing experience. 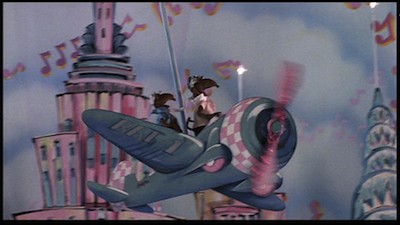 Video:
The Blu-Ray release of Muppets Take Manhattan is a widescreen 1.85:1 image presented in 1080p. The image is clear and full of detail, though soft at times. It is hard to tell if this, and the resulting graininess, is the product of the transfer or just the nature of the cinematography. One also wonders if increased definition would spoil some of the illusion, as the kind of texture we usually praise on Blu-Rays might make the puppets appear a little too obviously fake. It's not a bad transfer, but close to average, neither stunning nor bad.

The package also comes with a bonus DVD version of the film, which has both widescreen and full screen options. That disc has all the same bonus features as the BD. My guess is this is just a re-pressing of the original disc released 10 years prior.

Sound:
The 5.1 DTS-HD MA mix on the main audio is fairly good, with a rich overall sound that particularly lends itself to the musical numbers. There aren't really any notable surprises to be had in terms of using the full range of speakers; the soundtrack largely settles into the center aisle and stays there.

Extras:
Extras here are ported over from the earlier DVD, and as mentioned, they are on both discs. In addition to the expected collection of semi-relevant trailers, there is a vintage interview with Jim Henson, broken into five snippets, about a minute each. There are also three "Muppetisms," three short comedy bits created specifically for DVDs, starring Pepe, Fozzie, and Miss Piggy and Kermit.

The BD is also enabled for BD-Live, though unsurprisingly the added online content doesn't extend beyond commercials. It also was a little buggy and caused the whole disc to operate poorly, particularly when loading.

FINAL THOUGHTS:
Rent It. I love the Muppets, but hey, not even hilarious fuzzy puppets can be on target 100% of the time. The third full-length movie from the Henson team, The Muppets Take Manhattan, falters over well-worn ground, lacking the humor and the creativity that launched the troupe in the first place. It's not a terrible bit of entertainment, and the Blu-Ray is decent, but honestly, I'd much rather watch the original movie or any of the old TV shows instead. 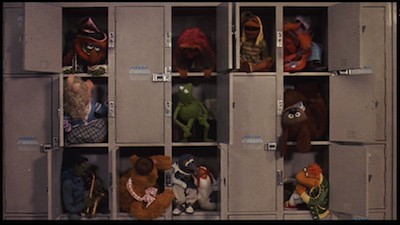