MGM // R // May 10, 2011
List Price: $34.98 [Buy now and save at Amazon]
Review by Stuart Galbraith IV | posted June 5, 2011 | E-mail the Author
The Terminator (1984) was part of Sony's very first wave of Blu-ray titles back in June 2006 (for the record the others were The Fifth Element, 50 First Dates, Hitch, House of the Flying Daggers, Underworld: Evolution, and xXx). This new "Blu-ray Book" release apparently sources the same transfer and includes the same standard-def supplements as before, some dating back to the mid-1980s, meaning that the only thing new about this release is the book itself, 25 full-color pages of notably thin material, much of which reads like it was cribbed off the IMDb.

But the movie itself still plays wonderfully well. Produced on a modest budget the picture's huge success launched writer-director James Cameron into the Hollywood stratosphere and rescued top-billed Arnold Schwarzenegger's stalled movie career, instantly catapulting him into the top-tier ranks of super-stardom.

The transfer is okay but has much room for improvement. Amazingly, the film was originally released with a monophonic soundtrack back in 1984 (seven years after Star Wars made Dolby Stereo the go-to format for big sci-fi titles), and as with the 2006 Blu-ray that original track isn't included, nor are a few standard-def features from earlier DVD and laserdisc releases. 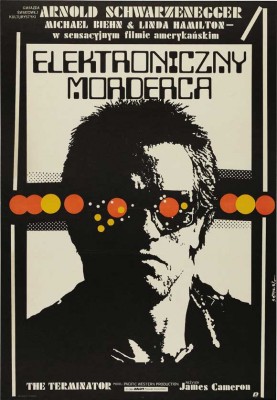 The Terminator begins in 2029, in a post-apocalyptic future where (too-) advanced machines are trying to exterminate the human race, and resistance fighters are living like rats in the rubble and underground. Two beings, using a never-seen time machine, travel back to 1984 Los Angeles, for reasons not initially clear. One is a cyborg assassin, a "Terminator" (Schwarzenegger), though it's not revealed until much later that he's mostly a machine; the other, a human freedom fighter named Kyle Reese (Michael Biehn) on a one-way mission. Both are looking for Sarah Connor (Linda Hamilton), who in 1984 is a young, unmarried coffee shop waitress, but who in the future will make a significant contribution to the survival of mankind. The Terminator's mission is to prevent that from ever happening, while Reese, following the Terminator back into the past, hopes to save her.

Coincidentally, a few days before watching this Blu-ray I caught a big chunk of Cameron's next movie, Aliens (1986), on Japan's NHK's high-def BS-hi channel, and was struck by how, purely in terms of production values, the two movies are leagues apart. Aliens, which cost $18.5 million, has hardly aged at all (it's still Cameron's best film to date), while the $6.5 million Terminator looks like a Charles Bronson thriller for Cannon with special effects reminiscent of Mario Bava's imaginative but low-budget Planet of the Vampires (1965). This sounds like a complaint but it's really a compliment, a testament to Cameron's incredible ingenuity: Terminator looks far more expensive than its budget normally would have allowed, featuring an epic, post-apocalyptic future most would have thought impossible for that amount of money.

The model work in these sequences isn't nearly as convincing as similar shots in Aliens, but just the same I'm glad Cameron hasn't succumbed to Lucas's Syndrome and replaced all this modest-budget ingenuity with CGI drivel. These scenes have an organic quality (a strange term, considering we're talking about a machine-dominated future world) completely missing in most CGI-driven blockbusters.

I hadn't seen The Terminator in something like 20 years and was surprised by how dated the mid-1980s hairstyles, fashions, and pop music have all become. Some of the characters, such as Sarah's roommate, Ginger (Bess Motta), are both written and played much too broadly, but the clever and engrossing story is extremely taut and exciting, even today.

Cameron and producer/co-writer Gale Anne Hurd got their start at Roger Corman's New World Pictures, she as an assistant to Corman himself while Cameron worked his way up through New World's visual effects unit, earning a reputation as a combative but undeniably determined and creative filmmaker. After Cameron's disastrous experience as a debut director on New World's Piranha II: The Spawning (1981), he and Hurd left New World to make The Terminator and, eventually, Aliens, The Abyss (1989), and Terminator 2: Judgment Day (1991), all extremely good and innovative movies, as well as popular successes.

Cameron freely admitted The Outer Limits was a big influence on Terminator's story, prompting writer Harlan Ellison to file a lawsuit for which he eventually received an undisclosed settlement and a screen credit added to later prints ("Acknowledgement to the works of Harlan Ellison"). This was due to Terminator's similarities to the Outer Limits episode "Soldier," about warriors from the distant future who travel back through time to present-day Los Angeles. Terminator bears a few other similarities to another Ellison Outer Limits teleplay, "Demon with a Glass Hand," but his lawsuit exclusively cited "Soldier" as a source. The second-half of the picture reminds me of Westworld (1973), which also featured an unstoppable humanoid robot notably worse for the wear by the end.

Regardless, the The Terminator and the Cameron-Hurd-William Wisher, Jr. screenplay is clever in innumerable ways all by itself. I particularly like the basic conceit: the story of a young, carefree woman whose biggest concern is finding a date for Saturday night, suddenly forced to tap into a survival instinct she can't even imagine, but which slowly emerges over the course of the picture. I also like Reese's relationship with Sarah, that he never doubts that Sarah Connor is destined for greatness, even as she insists that she can't even balance her checkbook. He puts her on a pedestal, but justifiably so, with the benefit of hindsight.

It was also an ideal part for Schwarzenegger, a limited (to say the least) body builder-turned-actor. Though top-billed Schwarzenegger has just 17 lines in the entire movie, many of which are still frequently quoted today. He's not even around at all for the climax, by which time his character has been stripped of its human flesh exterior. The character is realized through a mixture of stop-motion animation and puppet-like props. Yet it's to Schwarzenegger's credit that even as a walking skeleton-like robot, the audience still subconsciously thinks of the character as explicitly his, somehow embodying Schwarzenegger's personality.

From the earliest days of his career Cameron either was lucky or eagle-eyed (or both) in landing good actors for his films. Hamilton is very good here, and even better in a more challenging part in Terminator's sequel. (For that matter, Schwarzenegger's part is better in that, too.) Michael Biehn and Lance Henriksen (as a police detective) lend strong support; both play major roles in Aliens, as does Bill Paxton, who turns up briefly here as a street punk loitering at Griffith Park Observatory.*

The Terminator, a 20th Century-Fox-distributed title from MGM originally produced by Hemdale for release through Orion (!), is reissued to Blu-ray with, sadly, no substantive upgrades. The 1.85:1 transfer is apparently identical to the 2006 release, which is serviceable but by 2011 standards unimpressive, with just so-so detail and clarity, and notably dirty opticals and title elements. The original mono track is absent, replaced by okay PCM 5.1 (uncompressed) and 5.1 Dolby Digital ones, with a French track in the latter format as well. English, French, Spanish, Portuguese, Thai, Korean, and Chinese subtitle options are available, and the disc is region "A" encoded.

Supplements are identical to the 2006 release, with deleted scenes, a "Creating The Terminator: Visual Effects & Music," and "Terminator: A Retrospective" all in standard definition. The book is hardly worth mentioning, dominated by short, generic essays by Richard Tanne and Travis Baker and a trivia page with info already known to most of the film's fans.

I'd expect a big "30th Anniversary Edition" Blu-ray in 2014, but until then this Terminator is the best there is. Though dated in some respects it still holds up and watching it again all these years later it's easy to see why it was so hugely influential in the trend toward high-concept moviemaking. Recommended.

* A popular movie location, Griffith Park Observatory's many credits include Rebel without a Cause, War of the Colossal Beast, and The Rocketeer. With The Terminator it can also claim Schwarzenegger's only full-frontal nude scene.