Dark of the Sun (The Mercenaries)

Slam-bang, lightning-fast, crude, vital actioner...with something on its mind. Warner Bros.' must-have M.O.D. (manufactured on demand) on-line service, the Archive Collection, has released Dark of the Sun, the 1968 M-G-M hit about mercenaries in the strife-torn Congo starring he-men Rod Taylor, Jim Brown, and Peter Carsten, with Yvette Mimieux and Kenneth More lending good support. A little-seen (since its release) title that was notorious in its day for its levels of violence and sadism, and which has now gained some cult cred based on the endorsement of a certain director (who has watched this movie very carefully...), Dark of the Sun ranks up there with the very best of 1960s big-scale actioners, blending a gritty, unrelenting savagery with some intriguing political/sociological/psychological undercurrents. A nasty little trailer―a rarity for these M.O.D.s―has been included in this nice wide widescreen release. 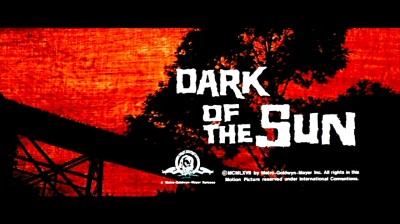 The Democratic Republic of Congo, 1965. A tribal-based uprising rages in the country, fed by the various Western and Eastern powers who smell political and economic opportunity, while the President, Mwani Ubi (Calvin Lockhart), looks for a way to hang on to his power. Port Reprieve, 300 miles away where most of the northern country's diamonds are kept in a modern underground vault, is in danger of being overrun by the savage rebels, and Ubi has a plan to satisfy Dutch mining representative Delage (Guy Deghy), as well as the Western bankers who want to pull the plug on fading Ubi: send in mercenaries Curry (Rod Taylor) and Ruffo (Jim Brown) with a strike force of Congo regulars on a train bound for the diamonds...while rescuing any European civilians on the way. This humanitarian slant should quiet the U.N. forces who don't look too kindly on mercenary interference, but it's not fooling Curry, who understands exactly why he's going into the interior, and who wants 50,000 dollars for the job―double Ubi's offer. Given only three days to execute the mission, Curry is convinced by Ruffo that Captain Henlein, a former (and current) Nazi, is needed to directly command the regulars, so the team sets out on a mad dash to recover the diamonds. Unfortunately, any number of setbacks immediately occur, including inconvenient stops for civilians, like Claire (Yvette Mimieux), the widow of a Simba massacre; attacks by U.N. and rebel forces; and the blood fever that sets in when 50 million dollars worth of diamonds are up for grabs...as well as when friends begin to question their reasons for fighting in the first place. 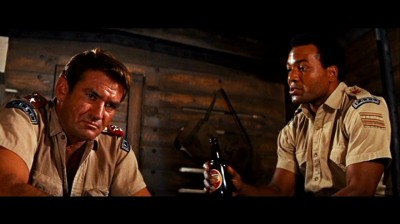 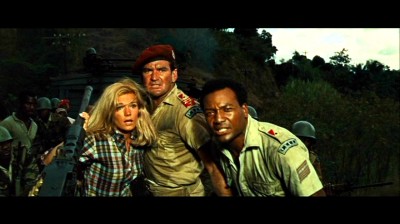 Certainly when I first saw Dark of the Sun in a severely-edited syndicated version on some late, late show back in the early 70s, its heavy emphasis on balls-out violence and action made it a note-worthy addition to other big-screen he-man actioners I favored, such as The Dirty Dozen, Where Eagles Dare, and of course, The Guns of Navarone. If I couldn't actually see Dark of the Sun's violent acts themselves, I could at least imagine what I was missing―a favorite past time for pre-cable TV viewers my age who wondered why so many films on TV had so many weird jump cuts. Having seen Dark of the Sun many times since then on Turner Classic Movies, its once-notorious violent imagery can still raise an eyebrow or two (the guy getting his face smashed in with a burning torch is worthy of any sickness in movies today). Director Jack Cardiff expertly amps up the queasiness-factor as the story relentlessly goes forward, from a classic chainsaw fight between Taylor and Carsten (Cardiff adds the nice touch of having the chain zip over Taylor's belt, just missing his gut), to the sight of a guy with his leg hacked off, laying in the dirt, to an all-out orgy of violence and sadism at the film's climax, where African rebels rape and torture anything that moves (including our sensitive, cowardly Congo regular, Surrier, played by Olivier Despax, and a nun who has her habit ripped off before she's thrown over a railing), as Cardiff keeps the actual penetration just out of frame (as Brown carries Taylor in, Cardiff shows rebels grinding away at arms and limbs). 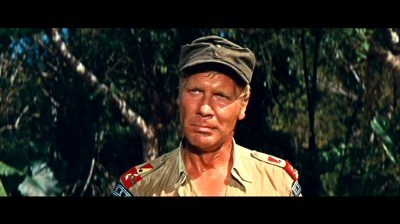 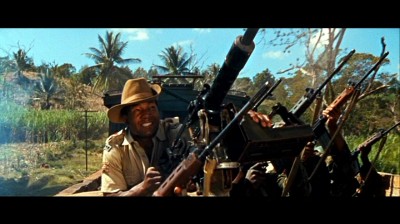 It's wild stuff when seen in the context of just how far studio feature films didn't go in 1968, and one can see how a director like Tarantino and his admirers would be attracted to the raw nastiness of it all (one can tell that Tarantino, who reminds me of a little boy gleefully aping real movies made by men, has studied this movie quite closely). Director Jack Cardiff achieves a remarkably dirty, gritty production design (with Jamaica substituting for Africa here), and he knows how to keep the story moving and moving and driving forward. Taylor, coming nearer towards the end of his A-picture starring roles, ditches the phony polish he often employed and lets his meaty face flush and sweat; it's probably his best role (perhaps next to his run as Travis McGee in the vastly underrated Darker Than Amber), while Brown, who could be stiff as a board in his other M-G-M outings, absolutely nails his best characterization here, showing a skilled understatement and a contemplative calm that plays perfectly against Taylor's outsized performance. 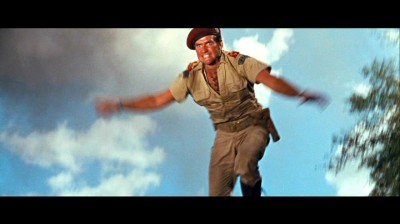 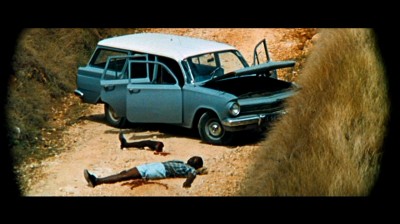 However exciting/disturbing those elements are, Dark of the Sun wants to achieve more than just setting up targets and knocking them down (as Where Eagles Dare does so well)―and it largely succeeds. As the movie begins, the viewer feels fairly comfortable going in that they're watching a cynically-minded, tough-as-nails, action-oriented adventure, and probably nothing more. Taylor hits just the right note of caustic, sardonic world-weariness at Ubi's dodge about a "humanitarian" mission. Taylor knows the score; this mission is about money and political power, nothing else, and he's merely playing a role in the facade. But screenwriters Ranald MacDougall and Adrian Spies almost immediately introduce a layered approach to both Taylor's and Brown's characters, establishing that deep schisms in behavior and motivation underlie their relatively unexamined relationship. Brown's Ruffo, contrary to the bigoted journalist who calls him a "big ape," is actually the more educated, more socially committed member of the team. He's a USC graduate (as an exchange student) who speaks four languages and who's fighting in his homeland not for money but for the survival and importantly, the advancement of his people, where he's willing to put his life on the line to bring them out of their savage ways ("I came down out of the trees by invitation...and I'll kill anyone who tries to put me back."). 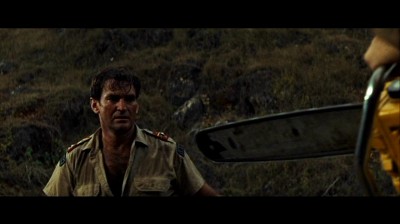 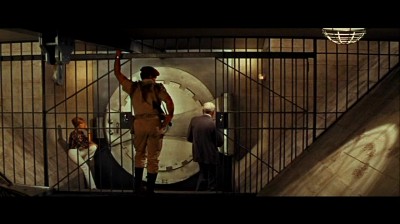 Taylor's Cully, on the other hand, is in it purely for the money. He neither cares for the people or the country, in any larger sense of duty to their advancement. Later, Cully shows basic human decency at the atrocity that Carsten's Henlein pulls when he cruelly zaps two little children, suspecting (perhaps rightly), that they're spies for the rebels. Interestingly, Ruffo is the voice of remarkable even-handedness when comforting a disgusted Cully. Ruffo admits that he came from circumstances no different than Henlein, in his own way―Henlein was raised a Nazi, and Ruffo's tribe were cannibals―so he understands Henlein's sickness of his soul. He admits he needs Henlein, and convinces the less-tolerant Cully to continue to have Henlein stay with them―a decision that proves disastrous in the end for both Ruffo and Cully. 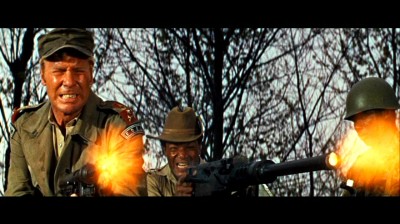 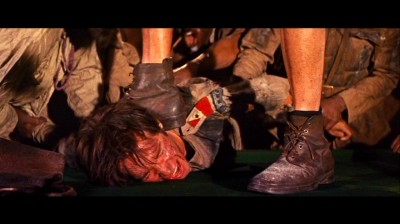 Going even further with this interesting subtext, the screenwriters have Ruffo eventually "turn" on Cully, after Ruffo is sickened by the sight of the rebel massacre/orgy. He wants to know where Cully stands...who promptly tells him to shut up. He comes to distrust Cully, until Cully makes a gesture that proves Cully won't abandon the rag-tag group after they run out of gas, but Ruffo will pay for his even-handedness when he's knifed in the back by Henlein. Without the civilizing support of Ruffo (again, another irony of the script that the native Ruffo is more civilized and more socially committed than his supposed "white knight" Cully), Cully goes off the deep end, horrifically murdering Henlein instead of bringing him back for a court martial trial. Now just as savage as the rebels he fought, Cully is completely lost, both morally and spiritually, and only through penance can he return to the ideals of Ruffo's (he turns himself over for court martial for Henlein's murder). What started out as a "men on a mission" actioner (I hate the overuse of that simplified moniker), has by the end turned quite complex and even moving, as Dark of the Sun examines a timely question: can violence be employed for the advancement of people (here, Africa), or is it merely a tool for political and economic gain from those who care not for its aftereffects? Will violence ultimately by harnessed and indeed suppressed by good men fighting the "good fight," if you will (Ruffo and Bloke Modisane's Kataki), or will it be let loose and given free, savage rein, by Cully, who reverts back to an animal, falling from grace. As a disgusted Kataki, the faithful African subordinate who can't believe how far Cully has fallen, says, Cully's grotesque, cold-blooded murder of Henlein is a "tragedy. Blackness. We [the Africans] come from blackness. Not go back." That's a hell of a message coming from a movie that revels in its own wanton viciousness. 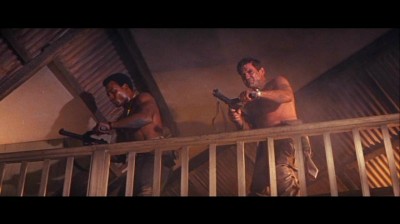 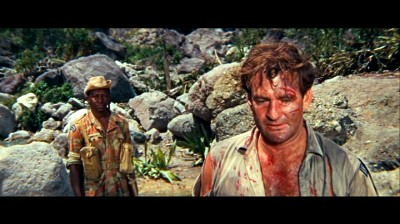 The Video:
No doubt about it: there are scratches and dirt apparent on the print used for this wide, wide 2.4:1,anamorphically-enhanced transfer. However...the color is absolutely first-rate; the image is almost razor-sharp, and compression issues are nil. Looks quite, quite good.

The Audio:
The Dolby Digital English mono audio presentation had a solid re-recording level...but it's a shame we can't hear the pyrotechnics and that faux-Morricone score by Jacques Loussier in stereo. No subtitles or close-captions.

The Extras:
An original trailer―a nice touch for these extras-starved M.O.D.s―has been included for Dark of the Sun.

Final Thoughts:
If you've only heard about Dark of the Sun as some cult actioner with a lot of gore and violence to recommend it, you might be a tad disappointed―but only because nothing from a studio back in 1968 can match up with the orgies of violence that are routine today. Dark of the Sun more than holds its own with the likes of The Dirty Dozen and Where Eagles Dare, with the added bonus of a fascinating subtext on the nature of violence and its exploitation, both personal and political. Rod Taylor and Jim Brown have their best roles here, and the speed of the film is relentless, with the action down and dirty. Everything you could possibly want in a big-screen actioner...with something to think about at the end. On content alone, I'm giving Dark of the Sun our highest award here at DVDTalk: the DVD Talk Collector Series award.