I'll admit, when I first saw the trailer for Battle: Los Angeles, it got me interested. You had a story that had admittedly been done before, though the casting choices were interesting and it had the potential to be a box office favorite. However, when people started to see it, the word of mouth quickly spread and people avoided it like the plague. Consider that of its near-$85 million domestic box office take, more than half ($46 million) was made in its opening weekend. So it sounds like a film that was as clear an example of being driven to make the big initial number, then fade away without anyone caring. But it couldn't be that bad, could it?

Written by Christopher Bertolini and directed by Jonathan Liebesman (Darkness Falls), the film starts with a shot of what is going on in Los Angeles on August 12, 2011. Many bombs, much gunfire, hell on Earth. Flash back 24 hours and we find Marine Sergeant Mike Nantz (Aaron Eckhart, Rabbit Hole) putting in his retirement papers. He has served his 20 years of duty and his more recent tour included the death of some of his men, something he remains haunted by. Yet like a police detective days away from retirement, he is called into action one more time to help evacuate citizens from a cluster of meteors hitting in the water outside of the Los Angeles area. We soon discover that these alleged meteors are mechanical alien beings (think the storm troopers in The Phantom Menace). The Marines have a new mission: go into Santa Monica and retrieve some civilians that are trapped there, including Michele (Bridget Moynihan, The Recruit), before the military wipes out the area. They also run into an Air Force Sergeant named Santos (Michelle Rodriguez, Avatar) who possesses the tools necessary to complete the strike. The race is on for all involved to get out of Santa Monica before the place becomes charbroiled. 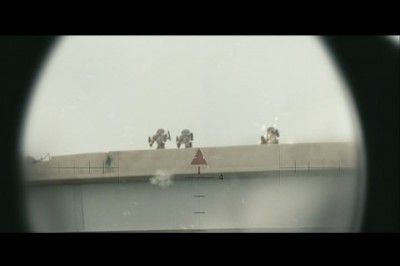 The thing that struck me after watching the film and looking at the supplements is that to paraphrase, unlike other similar productions that are "alien war films," the filmmakers of Battle: Los Angeles believe theirs is a war film that happens to have aliens in it. In doing so, they have made one of the key elements to hook the viewer in (the intrigue with and about the aliens) impotent. When you combine that with the traditional tired plot devices for our little backward human bunch to gain level playing around against these technological beings, the result is laughable.

How much more could it be then Will Smith and Jeff Goldblum installing a new OS on an alien craft resulting in the Blue Screen of Doom? Try this: the Marines bring in the corpse of one of the aliens to try and figure out how to kill the others. One of the characters volunteers to do an autopsy of sorts. What makes them an expert? A job as a veterinarian. Well, OK I guess. Then you get to the end sequence, which seems to lift from In the Army Now, except with the gravitas of not having Andy Dick. It's a tragedy too, because Aaron Eckhart deserved a much better fate that this script, and he even was likable in the first act before he started channeling Christian Bale's gravel-voiced inflection. Everything in between is one brutal journey to get to the end and wonder how ludicrous the filmmakers can make it. 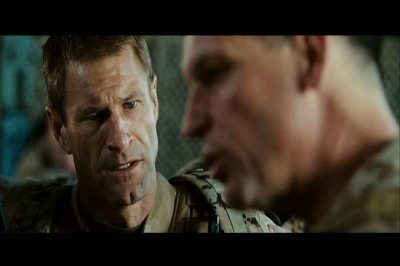 Ultimately, what do I think of Battle: Los Angeles? Well, recently I took a bus from Washington D.C. to Boston for the weekend. A nine-hour trip (one-way) became 12 hours, during such time that my Red Sox tickets were rendered useless and an emergency ambulance sheared the side view mirror from the bus before leaving and not saying anything to the driver. And yet that experience was more engaging than watching two hours of Battle: Los Angeles because while both might not have been believable, at least the bus was substantially more engaging and cohesive than the film.


Presented in 2.40:1 anamorphic widescreen, Battle: Los Angeles sure does look nice, with blacks providing a strong contrast and flesh tones reproduced accurately. The color palette is fairly muted for the film, sporting many earth tones (the Marines are present through the film after all), so there is no real cause of concern for color oversaturation. The source material is pristine and there are no noticeable bouts of edge enhancement. Sony continues the good work on DVD visuals.


It is surprising that with a film like this, Battle: Los Angeles only gets a Dolby Digital 5.1 surround track, but with that said, the track brings the goods. Bullet hits through the soundstage with effective directional effects and channel panning, and the subwoofer gets a workout during the ample explosions. The level of immersion you experience is convincing and in the quieter scenes (if you can call them that for this film), subtle effects are easily discernible. No one could ever accuse the film of being weak sonically.


Not all that much is here to be honest. First is "Behind the Battle" (6:45), where the cast and crew talk about their thoughts on what the film is and what's important to them in it, and even the production design gets a moment of coverage in this piece. The largest extra of the four on the disc is "Aliens in LA" (17:45) covers the making of the aliens for the film, both from practical and computer effects perspectives. The visual effects team responsible for the CG portions of the troops talk about Liebesman's intent for the creatures in the movie and there are oodles of concept art and previsualization footage in the segment. The cast and crew share their thoughts on the practical buggers and even details like the battle tactics the aliens would employ get talked about. Kudos for the attention to detail. Next is "Preparing for Battle" (5:16), in which the soldiers talk about what it was like...to be soldiers, including the weapons usage and physical aspect of their roles and doing many of the stunt sequences for the feature. "Creating L.A. in LA" (5:47) shows the lengths taken to make the Louisiana locations look like Los Angeles and Santa Monica.


The front of the case for Battle: Los Angeles tells us that "It's not war. It's survival." Well, I can honestly say that I survived watching the film, and not in a good way. And with all due respect to Shawn Edwards (who is quoted on the back of the case), both Independence Day and District 9 were a hell of a lot cooler, and you're likely to be more entertained watching them than wasting two hours on this.