The set includes numerous extras, including an audio commentary with Velvet Vampire and an extended, reconstructed cut of Lady Frankenstein. Though the packaging lists these as 4:3 full frame, all are better-than-you'd-expect 16:9 enhanced widescreen transfers with the exception of Grotesque. Even though that's the most recent film, that video transfer is full-frame and rather poor. 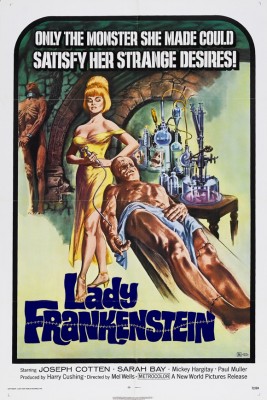 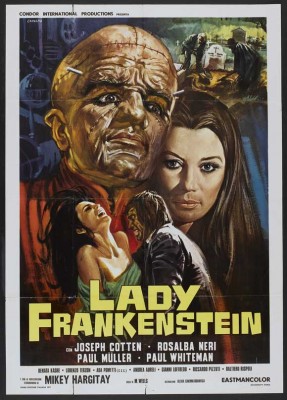 Lady Frankenstein wasn't quite what I had expected. A real anomaly, it was made in Italy but directed by expatriate American actor Mel Welles, best-remembered as flower shop owner Gravis Mushnik in Corman's The Little Shop of Horrors (1960). Further, the role of Baron Frankenstein was played by another American, Virginian-accented Joseph Cotten, an odd casting choice.

The movie starts out in familiar territory, with Frankenstein in league with a grave robber, Lynch (Herbert Fuchs), and receiving fresh corpses on which to conduct his experiments. With the assistance of Dr. Marshall, the baron hopes to bring a stitched-together body back to life. These early scenes, while cheaply done, are quite classical and even stylish. Good use is made of the snow-covered, Bavarian-like locations and there's even a surprisingly good laboratory set. Visually the look of the film is most similar to Hammer's Evil of Frankenstein (1964) and certainly better appointed than any of Hammer's '70s movies.

The baron's daughter, Tania, arrives. She's played by earthily beautiful Rosalba Neri, billed here as Sarah Bay, a brunette who looks nothing like the blonde depicted in the U.S. poster. Tania has recently graduated from medical school hoping to become a surgeon but rebuffed by the chauvinistic medical profession. Where Baron Frankenstein is sober and earnest, Tania is impetuous and lustful. When she learns about her father's activities, for her it's like a narcotic.

The audacious monster (Paul Whiteman*) is quite a sight. Standing about seven feet tall, the creature has an oversized head shaped like a colossal light bulb. A mildly clever idea has the monster's face burned as lightning brings it into existence. One side of its face is scarred and his popeye on that side is in constant danger of falling out. In early scenes the actor playing him impressively walks like a living corpse but later is portrayed as a mere hulking brute.

From here the picture curiously shifts yet again, with several set pieces of gratuitous nudity, almost as if Welles began making one kind of picture and then Corman stepped in and ordered a quotient of sex scenes. One outrageous bit recreates the moment from the 1931 Frankenstein when the monster (Boris Karloff) innocently throws a little girl into the water, unwittingly drowning her. Here she's a naked, busty blonde.

Still, Lady Frankenstein gets an "A" for effort. Some have suggested the film has a feminist agenda, and it's possible that a few of its gaggle of writers were thinking in those terms. (*** out of *****) 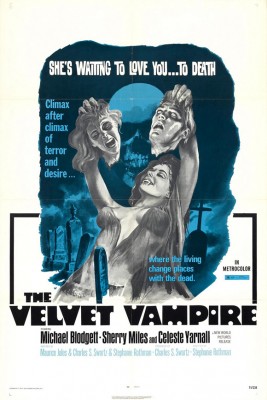 The Velvet Vampire, also known as Cemetery Girls, is likewise ambitious and sincere though less successful. Its plot coincidentally is quite similar to Harry Kümel's Daughters of Darkness, released almost simultaneously that same fall. Both were in turn inspired by the commercial success of Hammer's (and AIP's) The Vampire Lovers (1970), the first of innumerable lesbian vampire movies that was itself based on J. Sheridan Le Fanu's 1872 novel, Carmilla. The Velvet Vampire of the title is named Diane Le Fanu (Celeste Yarnall), a clear reference.

The slowly-paced film has sleepy-eyed Lee (Michael Blodgett) and his wife, Susan (Sherry Miles), meeting Diane at an art exhibition. She invites them to visit her home out in the desert. Diane openly flirts with Lee and that upsets Susan, though it's clear from the start Diane really has her long-term sights set on her, not him. The couple also shares the same surreal/arty dream, with their bed transported into the middle of a sand dune, and where Diane lurks from behind a full-length mirror.

As with Lady Frankenstein, much has been made of the film's so-called feminism, chiefly because a woman, Stephanie Rothman, a Corman protégée, directed it. But The Velvet Vampire never really breaks away from the pack of similar films made during 1970-73, nearly all of which were directed by men. In those films as well, women empowered by vampirism dominated male-female relationships. And they took their clothes off in those pictures, too.

Blodgett is okay but Miles and Yarnall are inadequate. Both are attractive but neither has the acting chops or personality to make the fantastic situation compelling or believable. Still, the sunny, remote desert setting is undeniably novel, and the finale is funny, clever, and wistful all at once. (**) 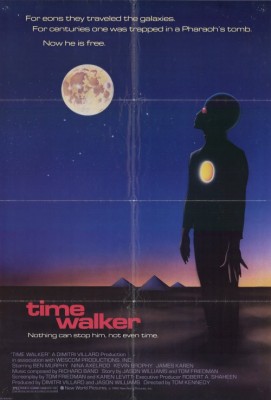 Though mercilessly ridiculed on Mystery Science Theater 3000, Time Walker is a naively charming low-budget horror and sci-fi thriller, a real throwback to a more innocent time. It has many of the problems associated with first-time filmmakers attempting something beyond their means ($750,000) and abilities, but it has its good points and, for a change, doesn't at all resemble the usual New World schlock.

The film operates from a novel (at least in film) premise: a mummy unearthed from the tomb of Tutankhamun turns out to be an ancient astronaut, an extra-terrestrial discovered and entombed by Egyptians fearful of the deadly plague it carried. Reanimated in present-day Southern California, the mummy runs amok for a while on a university campus before - ahem - "wrapping up" in a wild finale weirdly similar to that of E.T.

Professor Douglas McCadden (Ben Murphy) discovers the mummy in Egypt, exteriors of that country played by still photographs and a rather good cave interior set. Back in California Peter Sharpe (Kevin Brophy), the student assigned to X-Ray the mummy and its sarcophagus, discovers a hidden panel behind which he finds five large crystals. Believing them to be valuable diamonds he steals them, but a pawnbroker declares them worthless. Undeterred, he sells or gives them away to various students. But then the mummy returns to life and, like the tana leaves of Universal's "Mummy" series of the 1940s, begins stalking those in possession of the crystals.

In an interview accompanying the feature, producer Dimitri Villard explains that New World was just one of three investors in the film, which is probably why it looks so different from their usual release. Villard goes on to add that when Corman screened the film, rather than praising it afterward he instead instructed Villard to cut the film by almost 15 minutes so that New World could save $25 in print-shipping costs. (There's a sudden transition about three-quarters of the way into the film that makes no sense.)

And yet, it's obviously a sincere effort and this is part of its charm, just as the utter crassness of New World's in-house productions is part of theirs. The acting ranges from pretty good (Murphy, James Karen, and Austin Stoker) to amateurish; Shari Belafonte has a small, inconsequential role as a DJ. The alien-mummy, who has a big light in the middle of its belly, suggesting a 1948 Tucker Sedan, is pretty decent, and wisely kept in the shadows most of the time. The special visual effects, while modest, aren't bad for such a cheap movie. (***) 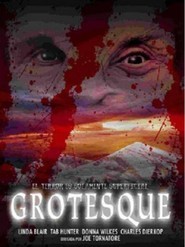 Grotesque is that and more, a dizzying demolition derby of genres. The picture begins with an incomprehensible opening that turns out to be a cheat: a movie-within-the-movie included for no clear reason. To accommodate it, a rambling monologue is spoken over interminably long opening titles. The movie proper begins with Kathy (Donna Wilkes) and Lisa (Linda Blair) driving up to Big Bear Mountain to visit Lisa's make-up effects artist father (Guy Stockwell) and the rest of her family, more about whom in a moment.

Along the way, they run afoul of a gang of spiky-haired, leather-clad punkers that, somewhat contrastingly, drive an eggshell blue Volkswagen Bus. But they're cut from the same mold that attacked Charles Bronson's wife and daughter in Death Wish, so you know where this one's going.

Or so you think. Though all the likeable characters die horribly before the movie is even halfway over, the punker thugs hadn't reckoned on Lisa's mutant brother Patrick, whose face is melting just like Vincent Price in "The Face in the Case of M. Valdemar," a segment of Corman's Tales of Terror (1962). Patrick has been quietly residing in a hidden nursery. Enraged, he kills some but not all of the bad guys before being shot dead himself.

And then-then-then we're introduced to Lisa's Uncle Rod (Tab Hunter) and the movie shifts gears yet again, becoming a standard if gory and unpleasant revenge melodrama. (And there's one final twist at the end usually left off television airings rendering the film even more incomprehensible.)

The picture is a time-wasting jumble of half-baked ideas, overcooked performances (the actors playing punks are ridiculously overwrought throughout), and herky-jerky pacing. Grotesque's storyline certainly goes off in unexpected directions, but the movie is utter junk. (1/2 star)

Despite what it says on the packaging, only Grotesque is full frame. It's from what appears to be an ancient video transfer, one that might even pre-date the dawn of DVD. However, the other three films are 16:9 enhanced widescreen and generally look just fine, especially The Velvet Vampire and Time Walker.

Lady Frankenstein is even offered in both its 83:37 U.S. release version and a substantially longer, 95:44 international cut, reconstructed from at least three different sources. The cut scenes are everywhere, scattered throughout the movie and don't really add all that much. Most seem derived from a cable airing, as some sort of logo, "3 sat," appears in the upper left-hand corner most of the time. A few short clips near the end have what look like Czech or Polish subtitles. There is a slight pause when these cut scenes integrate themselves in. The Dolby Digital mono audio, English only with no subtitles, is adequate.

Supplements include full-frame trailers for everything but Grotesque, which has no extras at all. Beyond the choice of two cuts, Lady Frankenstein includes a still gallery (also on the other two films) and TV spots. The Velvet Vampire offers an audio commentary with Celeste Yarnall, moderated by Nathaniel Thompson, while Time Walker includes the aforementioned video interview with producer Dimitri Villard as well as one with actor Kevin Brophy.

No lost classics here, but given the dearth of Halloween releases on DVD in recent years this set is welcome and its films less familiar and not without interest. Recommended.

* Not, need I point out, the famous bandleader.