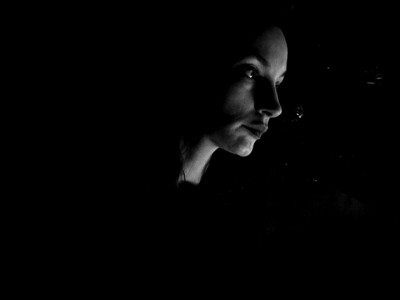 Ne Change Rien (Don't Change A Thing), Portuguese director Pedro Costa's musical documentary on French singer Jeanne Balibar, does practically everything that filmed music is capable of doing. Like a promotional music video, it is a stylized analogue to the music that we are hearing, an attempt to visually complement and reinforce the melodies and lyrics. Like a concert film, it offers the tightrope-walking, suspenseful pleasures (no safety nets) of live performance. And like a behind-the-scenes documentary, it transforms the viewer into a witness to the creative process. Add to this that the film is all of these things while simultaneously maintaining its strict adherence to Costa's rigorously composed, austerely beautiful aesthetic--making it an auteurist thrill for Costa (Colossal Youth) admirers, as well--and you realize that, however simple and straightforward it may seem, Ne Change Rien is actually a generous smorgasbord of musical and cinematic delights. 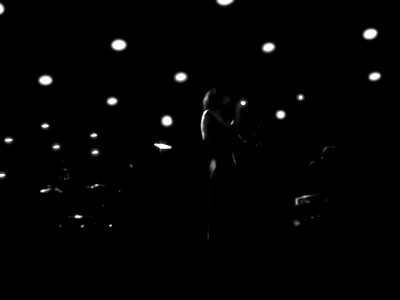 Balibar, the focal point of all this, has a star power that easily translates from the stage and recording studio to the screen. (Musical charisma and "screen presence"/photogenicity are not so very different, and, based on what we see of Balibar in Ne Change Rien, it is difficult not to imagine her doing a Marlene Dietrich-like silver screen crossover.) The film consists of perhaps a dozen or so very still, very long takes shot in black-and-white on digital video, in which Balibar is seen in the midst of doing what she does in a variety of iterations: a recording session, a concert, rehearsals for an opera, what appears to be a singing lesson with a vocal coach. Each of these long takes (the camera never moves, and each very occasional cut seems momentous) is of such a finely wrought beauty and meticulousness of mise-en-scène that we are absorbed right into it; e.g., the opening scene, with Balibar and her band on a stage, which is lit so low that we cannot really distinguish the performers' faces; they appear, under the body of overhead lights, like celestial entities glowing together in some far-off constellation. That is just one example of how Costa makes his seemingly scarce means work for him; his style really only comes off as stark at first glance, and as we slow down to take in each tableau he creates, we can see that it is as full of captivating, evocative detail as a poem or a painting can be if we are able to give it the close attention it needs for us to really see it. 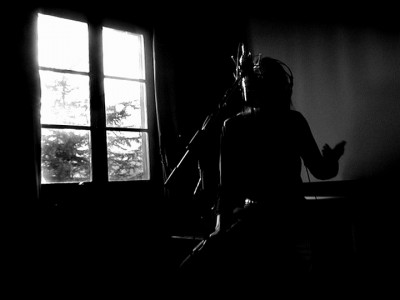 Following true chanteuse tradition, Balibar takes a more songbook/variety approach than most English-language popular musicians (it becomes evident over the course of the film that she can do virtually anything, from opera to jazz), but her primary style is a dark, moody, doomed-romantic balladeering strongly reminiscent of the slower numbers of Nick Cave and PJ Harvey. Her music is heavy-hearted and world-weary, yet paradoxically supremely lovely and transporting; the film demonstrates that hers is a very carefully, self-consciously crafted art that requires tremendous focus, hard work, and guts. We see the slow, strenuous, often frustrating process that she and her musical collaborators slog through when they are buckling down to develop and perfect each note, each bar, and each line; and we can appreciate the extensive degree of really quite formal thought and effort that goes into what appears (by design) to be the loose, informal, unfettered/spontaneous passion of rock-based musical styles. 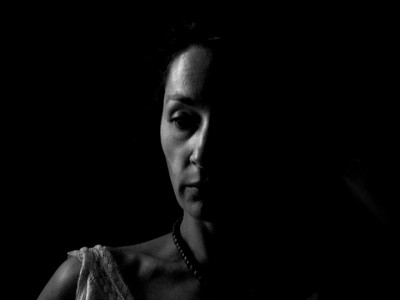 One of the most gratifying things about this wonderful film is that it achieves an unusually fine-tuned paralleling of form (courtesy Costa) and content (Balibar) as, in their shared perfectionism in service of isolating the essential and eliminating the rest, the two of them are kindred spirits. Each of these compelling and accomplished artists are committed to the incredibly difficult, demanding, sometimes emotionally anguishing task of paring their material down into the finished work, which they then present to us--as Costa offers us Ne Change Rien--as something with all the rare, sparkling, elegant simplicity of a perfectly cut diamond. 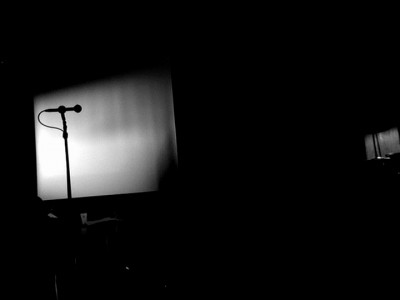 Cinema Guild always treats their material with the utmost cinephilic respect, and Ne Change Rien is no exception. DV, Costa's preferred format, is obviously especially well-suited to translation onto digital media, and the stunning, contrasting black-and-white compositions he creates for this film are preserved flawlessly, with no detectable visual deficiencies in the 1.33:1 original-aspect-ratio transfer.

The Dolby Digital 2.0 stereo soundtrack is perfectly fine, particularly for listening to the additional non-visually-accompanied audio bonus content (see below); but for the full, room-filling "live" experience so beautifully recorded and mixed by Costa and the film's sound engineers, the other, exquisitely vibrant Dolby 5.1 surround track is the way to go.

--The End of A Love Affair, an achingly gorgeous short film by Costa, is the perfect supplement for Ne Change Rien, featuring as it does a single, unmoving, uncut, five-minute medium-long shot of a melancholy young man leaning on a chair and gazing out of the window of his room, with a beautiful, ancient-sounding instrumental recording of the title tune as the soundtrack of his solitude. It is a concise, arresting little combination of the same ingredients--Costa's bold style and heartbreaking popular music--that make up, in a further-reaching form, Ne Change Rien itself.

--Three deleted scenes, each featuring Balibar and her band performing a number not used in the film. These bits may not have fit into the precise form Costa wanted for the main work, but they are shot in the same style and feature the same gorgeous voice and instruments, so they are certainly a fitting inclusion and essential viewing for anyone whom the film has converted (that will surely be most viewers) to the cult of Jeanne Balibar.

--"Tronomettes," a CD-length collection of audio tracks featuring Balibar performing in the very stripped-down style she calls "tronomettes," basically singing a melody over nothing but a metronome (hence the name) or metronomic synthesized sounds as musical backing. These are curiosities and would not in themselves make Balibar the captivating figure she is, but some are actually quite good. This supplement reminds one of Costa's own musical preferences; his great Colossal Youth is named, in its English title, after an album by The Young Marble Giants, many of whose songs could loosely be considered "tronomette"-ish.

--Finally, a handful of trailers: Cinema Guild's U.S. trailer, a teaser for the film, and five(!) succinct, well conceived and edited 30-second TV spots made for European markets. (This will, of course, be the first time U.S. viewers will be seeing them, courtesy Cinema Guild's thoughtful inclusion.)

As spare, elegant, and transfixing as the most devastating ballad, Pedro Costa's Ne Change Rien is another worthy addition to the director's small but essential filmography of ascetically perfect, emotionally astringent works. In choosing chanteuse Jeanne Balibar and her music as his subject, Costa has achieved an unusually apt alignment of content with form; Ne Change Rien is the superlative creation of not one but two brilliant, exacting artistic sensibilities. Highly Recommended.