Universal // R // August 9, 2011
List Price: $26.98 [Buy now and save at Amazon]
Review by Stuart Galbraith IV | posted August 7, 2011 | E-mail the Author
Better than its popular reputation would suggest, Fast Times at Ridgemont High (1982) deservedly won high marks for its frank and mostly honest if broad and exaggerated look at teenagers and their preoccupation with sex and drugs. Basically an early-'80s American Graffiti (1973), like that film it's a collage of teenagers at the crossroads of their lives. In American Graffiti, life was all about cruising Third Street into the wee hours on Saturday nights. In Fast Times, it's all about hanging out at the mall, where high school kids flirt with one another, buy drugs, and for the first time experience the endless humiliations working for corporate America. But its story is essentially the same. Like American Graffiti there's even a postscript about the characters' post-movie fates.

Today, Fast Times is a strange viewing experience for those of us who were there in '82. The ensemble cast, many of whom went on to become major stars and/or important actors, is now middle-aged. And for younger audiences watching this nearly 30-year-old movie, the effect is probably similar to what we felt looking at pictures Beach Blanket Bingo, a movie just 17 years old in 1982, mind you.

Universal's Blu-ray of Fast Times at Ridgemont High delivers in terms of picture and sound, and appears to be the completely restored version (some early home video releases had music rights issues resulting in deleted songs) but it falls a bit short in the extras department. Most of the supplements are recycled material from the 2003 DVD. 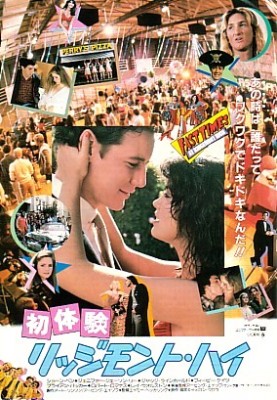 The screenplay, by Cameron Crowe and based on his 1981 book, is set in the suburban San Fernando Valley north of Los Angeles, tracing one school year in the lives of various students at Ridgemont High.

Fifteen-year-old Stacy (Jennifer Jason Leigh) is a freshman working part-time at a mall restaurant with her best friend, worldly senior Linda (Phoebe Cates). Linda acts as Stacy's guide in the mechanics and politics of sexual relationships. Elsewhere, Mark (Brian Backer) is an assistant to the assistant manager at the mall's multiplex cinema, in a part of the complex far from all the action. He's got a secret crush on Stacy, and like her he has a role model in Damone (Robert Romanus), a Lothario type and part-time ticket scalper who thinks he's a lot cooler than he actually is.

Meanwhile, Stacy's popular older brother, Brad (Judge Reinhold), is on top of the world. He's got a cool car that's almost paid off, and he's a manager in all but title at the burger joint at the mall where he works with his longtime girlfriend (Amanda Wyss). Unfortunately, all that's about to change. In a celebrated but largely disconnected subplot, zonked-out surfer dude Jeff Spicoli (Sean Penn) is the bane of history teacher Mr. Hand (Ray Walston), a taskmaster not about to put up with Spicoli's casual attitude toward education.

For comedic purposes and pacing, much of Fast Times at Ridgemont High is broadly and even extravagantly overdone. The frequent boredom/restlessness of teenagers trapped in that netherworld between child- and adulthood, a big part of American Graffiti, goes unexplored here. This is countered with a still-shocking frankness about sex. Using carrots Linda shows Stacy how to perform oral sex and both actresses appear nude in scenes so arousing director Amy Heckerling notes that VHS rental copies were prone to tracking problems during those scenes due to constant freeze-framing.

And yet the film is never exploitative because, for the most part, it's commendably real, especially Leigh's Stacy: the "nice" but potentially self-destructive type. Baby-faced Leigh gives an amazing performance with the then-20-year-old actress completely believable as a 15-year-old with limited relationship/sexual experience. More verisimilitude: One of the characters opts to have an abortion when she becomes pregnant, and is forced to go at it alone when the young man responsible worms his way out - claiming to be too busy helping his father clean out the garage! The film also captures the awkwardness of teenagers and their raging hormones. Many of its sexual encounters are quite funny because they're embarrassing and true at once.

The picture was a huge success but its real strengths played second fiddle to Sean Penn's weirdly compelling sparring matches with Ray Walston's no-nonsense history teacher. Penn's character virtually defined the Southern California surfer dude. Spicoli's jargon ("Awesome! Totally awesome!" "All I need are some tasty waves, a cool buzz, and I'm fine," etc.) quickly entered the lexicon and for a while Penn was unhappily typecast. Though providing little more than comedy relief from all the comedy and occasional drama, the relationship between Spicoli and Mr. Hand does have a certain charm. Spicoli may be clueless but he's unassuming, gregarious and even polite, presenting an unusual challenge for firm-but-fair Mr. Hand, who for his part is legitimately determined to educate his students.

Besides most of the actors described above, Fast Times at Ridgemont High's cast of future stars includes Forest Whittaker, Nicolas Cage (billed for the first and only time as Nicolas Coppola), Anthony Edwards, and Eric Stoltz. Lana Clarkson, later murdered by Phil Spector, has an amusing bit as science teacher Vincent Schiavelli's improbably voluptuous wife.

Will teenagers viewing Fast Times today watch it with the same bemusement my generation greeted Sandra Dee movies and AIP's Beach Party series? Maybe. Some of its themes remain pretty universal, just as American Graffiti continues to resonate, but I did laugh out loud at one joke surely lost on the younger generation: When Mr. Hand passes out his class's syllabus, en masse the students take a collective whiff at the smell of alcohol on the freshly printed ditto sheets.

Shot for 1.85:1 projection, the 1080p Fast Times at Ridgemont High looks surprisingly good for its age and its era, when poor lab work and high print runs often left 35mm prints looking like dog meat. The image here is sharp with strong color, all of which serves to take the viewer back to this long-lost era of Pac-Man, bad fashion, and the Go-Go's. Audio is 5.1 DTS-HD Master Audio, with the almost wall-to-wall soundtrack of early '80s hits coming off best. Optional English SDH, French, and Spanish subtitles are also included.

Older (and standard-def) but still worthwhile supplements include a 40-minute behind-the-scenes featurette that includes on-camera interviews with members of the cast and crew (with a few significant no-shows), as well as a trailer and an audio commentary track with Heckerling and Crowe.

Blu-ray exclusives include "scene companion," essentially picture-in-picture material that appears to be recycled interview footage. In any case, the combination of the featurette and the commentary track is a far better use of one's time. "The Music of Ridgemont High" is more interactive stuff, basically identifying songs from the movie and using it as a marketing tool linked to iTunes.

Though it's come to epitomize the whole "Valley" image people from outside of California seem to hold toward that state's youth, Fast Times at Ridgemont High is still far franker and more honest about teenagers and sex (and to a lesser degree, drug use) than mainstream Hollywood would ever be willing to depict today. And that's just one reason this Blu-ray comes Highly Recommended.