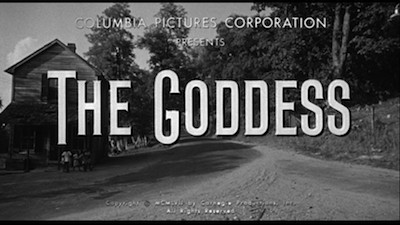 I find it kind of amazing that a movie so baldly based on the life of Marilyn Monroe was made in 1958 while the icon was still alive and still a major box office draw, but that's exactly what The Goddess is. Anyone with a passing knowledge of how Norma Jean Baker became the biggest star in the world will immediately see her story in Paddy Chayefsky's script for The Goddess. It doesn't pull any punches, either, predicting in what kind of tragedy Marilyn's continuous fall would end. Impressive, too, that despite the biting satire that Chayefsky was particularly known for (the man wrote Network, for goodness sake), he exhibits a surprising sympathy in analyzing Marilyn's character, even if he doesn't really successfully tackle her psychology.

The Goddess is distinctly broken into three acts--acts so distinct, in fact, title cards signal each break. Essentially, the first is the main character, Emily Ann Faulkner, as a little girl and a teenager in Missouri, then as a struggling starlet in Hollywood, and finally as the troubled megastar Rita Shawn. For the earliest years, Emily is played by Patty Duke, but from high school on she is portrayed with gung-ho dedication by Kim Stanley (Séance on a Wet Afternoon). Emily grows up dreaming of escaping her humdrum life and the mother who tried to abandon her at an early age. (Mom is played by Betty Lou Holland, giving one of the movie's best performances, equally distasteful as the wanton woman and the pious judge she eventually becomes.) Emily sees two routes out of nowhereseville: love and fame. The first is harder to come by, especially as boys take advantage of her even when she's young; the second proves easier.

Emily's first marriage is one of convenience: she marries John Tower (Steve Hill) because he is the son of a big-name actor. John turns out to be a headcase, warped into a mass of neuroses and self-pity by a father who didn't love him. He disappoints Emily, and they eventually split, with her giving up their daughter in the process. (In one of the film's few overdone scenes, Chayefsky and director John Cromwell really hammer home that this is the exact same thing that Emily's mother did to her; well, no duh, your emphatic zoom is overkill.) She goes from this perpetual overthinker to a man of action, retired boxer Dutch Seymour (Lloyd Bridges, standing in, presumably, for Joe DiMaggio). This love turns out to be disappointing, as well, and when Emily starts to compromise herself to become Rita, Dutch is left in a dust cloud of jealousy. 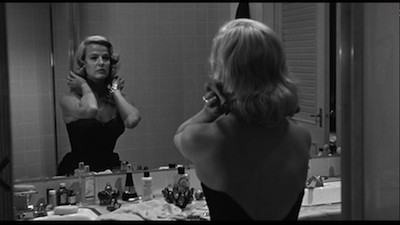 There is a lot to like about The Goddess. Though Cromwell isn't a dazzling director, he has a masterful conception of the cinema frame, and his ability to arrange a multi-character shot so that each performer is positioned in such a way as to signify his or her symbolic position within the scene is quite remarkable. Likewise, he is good with his actors, sometimes foregoing a perfect line delivery in order to keep an otherwise flawless take. When it comes to Kim Stanley's portrayal of the starlet, this embracing of accident and error ends up being particularly effective, as it subtly hints at how unhinged she is becoming. As the story progresses, Emily/Rita suffers nervous breakdowns and develops addictions, and the movie-making machine grinds her to pulp. Stanley delivers an excellent performance, even if it does come off as more Blanche Dubois than Marilyn. The only real fault I can find with her work here is that she's not convincing as a teenager, she doesn't really have a youthful face; other than that, the emotional tenor of her delivery is perfect.

That said, she's still not entirely suited for the role. If we're to accept an actress as a "goddess" along the lines of Marilyn Monroe, she really needs to have an indefinable X-factor that makes us want to watch her. I've been revisiting Marilyn's movies recently, and besides the fact that she's a top-notch comedienne, there is something about her onscreen presence that makes it impossible to take your eyes off of her. She's one of the few people that can draw attention away from Lauren Bacall, Laurence Olivier, and even Clark Gable in equal measure. Kim Stanley is capable of getting every nuance of the role just right, but she can't convince us that she'd ever be the biggest name on the marquee. It's an unfair requirement to be sure, but it's a danger of the profession. I had similar problems, for instance, watching Sienna Miller play Edie Sedgwick in George Hickenlooper's Factory Girl. She looked the part and she nailed the delivery, but she wasn't special unto herself. I will say, though, that Stanley's performance gave me a greater appreciation for how much closer Theresa Russell got to Monroe in Nicolas Roeg's Insignificance; and dare I predict this early that Michelle Williams will beat them all in the upcoming My Week with Marilyn? 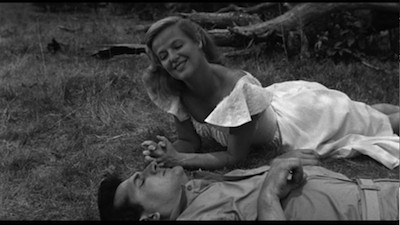 The fault for why The Goddess doesn't have sufficient sizzle doesn't lie exclusively with Stanley, either. As mentioned at the outset, author Paddy Chayefsky doesn't entirely unravel the puzzle when it comes to understanding what drives an Emily Ann Faulkner to become a Rita Shawn. The narrative structure of his script is sound, and there is also some amazing writing. Any time one of the characters gets any extended monologue, Chayefsky's typewriter really sings. Steven Hill gets some amazing runs as Emily's dark-shadowed first husband--but his speeches might also be an indicator of the script's major fault. Seemingly, Chayefksy is more comfortable with existential angst, a subject ripe for his biting lampoon, than he is the more complex psychological make-up of his main subject. The movie too easily dumps her into despair, hinting only vaguely at the exploitation that pushed her over the edge, never really drawing together her need for attention and admiration with her abandonment issues or creating a clear picture of her psychoses. Maybe it's partly down to never peeking behind-the-scenes and observing the actress at work, or even following her out into public to see how her fans react to her. Hell, maybe that stuff could have helped Stanley, as well.

That said, The Goddess doesn't make any mistakes that most other biopics didn't also make in the decades to come. The majority of onscreen portraits of famous personalities draw lines between the artist's early traumas and later epiphanies, and Chayefsky is far too smart a scribe to hack out such obvious connective tissue. Truth be told, it just might be that the cult of Marilyn means modern viewers are that much farther ahead on the curve, and so some of what he could only guess at has since been revealed. It doesn't entirely matter, either, since The Goddess is a formidable effort that far surpasses its easily forgivable faults. 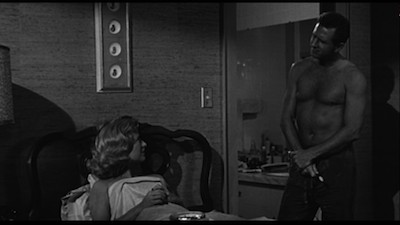 Video:
The Goddess is part of the Sony Pictures movie-on-demand program. In short, this means it's a DVD that isn't being mass produced, but is instead being made to order for cinema fans who want to spring to have a copy in their collection. Made as a blue-backed DVD-R, it comes with no frills, with just a rudimentary menu and little by way of restoration.

Luckily, in terms of picture quality, the source being worked with is really very good. The widescreen black-and-white image is free of any distracting damage, scratches, or dirt, and the resolution is nicely rendered throughout. Tonal values between light and dark could be more pronounced, but there is very little by the way of digital noise and no noticeable blocking, so that is a minor complaint. I don't think I'd complain all that much if this were a mass-market disc, much less one of limited production.

Sound:
The basic mono mix of the soundtrack doesn't fare as well as the video. Thankfully, the problem isn't with the dialogue, all of Chayefsky's brilliant wordplay comes through just fine. My issue is with the sound effects and background noise, which often sounds compressed and garbled like it's coming through a tunnel. You'll notice it right away, there is an electronic hum in the engine noise coming from the bus that brings Emily and her mother to town. There is even a slight echo in some scenes, such as one where a single baby is crying, but it sounds like there are two. I found my ears eventually adjusted, and I watched The Goddess just fine, but it's still too bad we couldn't have gotten a cleaner audio track.

FINAL THOUGHTS:
Recommended. This effort by writer Paddy Chayefsky and director John Cromwell is exactly the kind of movie one would hope a movies-on-demand initiative would unearth: a little-known, imperfect film that maybe has gone unfairly unnoticed. The Goddess is a startlingly prescient fictionalized take on the Marilyn Monroe mythos made while Marilyn Monroe was right at the tipping point between her greatest successes and her difficult final years. Chayefsky gives us a life in three acts: young girl dreaming big, young woman chasing those dreams, and the bitter reality of getting what she wants. Kim Stanley gives it her best shot in trying to be this invented starlet, and there are good supporting performances from Lloyd Bridges and Betty Lou Holland, but The Goddess falls short of its full mark. Still, the writing is so good and the performances so riveting, and Cromwell directs with such an assured hand, you'll want to sit through it nonetheless. 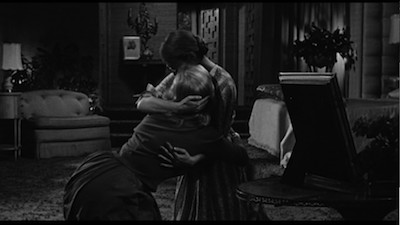