"The Reds hammered me to my limit, and broke it."

Mervyn LeRoy's Toward the Unknown, starring William Holden (also a producer on the film) as a war-damaged Air Force general trying to regain his place in the exclusive field of test-piloting, is a film that raises the question, should we (audiences, reviewers) approach every film as art, and judge it by that lofty criteria? Or should we, as the great critic J. Hoberman (The Dream Life, An Army of Phantoms) does, approach some films as artifacts that, while hardly artistic achievements or graceful, intelligent entertainment, do have a unique and vivid power to reveal, however inadvertently, something about their place and time? Taking the former approach, we would have to dismiss the film as flat-out poor art--a fairly rancid, recruiting-poster-bland slice of conformist Eisenhower-era Americana. But if we look at the film as part of Hoberman's "Dream Life" (the cinema as an entity that inadvertently reveals, like dreams do for the individual, the repressed fears, anxieties, and wishes of the culture and period that produces them), it becomes a sort of engrossing case study--a rich, involving experience in spite of itself. 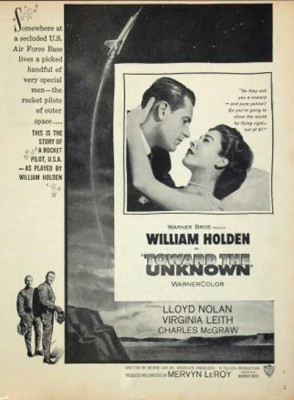 Holden is Major Lincoln "Link" Bond, a former up-and-coming Air Force test pilot who has been stuck behind a desk in Washington after cracking under the pressure of his horrific 14-month imprisonment in a Korean P.O.W. camp. But his insatiable love for the speed and danger of test-flying the latest military aircraft brings him back to Edwards Air Force Base, where his aspirations come up against an obstacle in the form of the upstanding but strict Brigadier General Bill Banner (Lloyd Nolan), who is unwilling to give him another chance and who has also set up two sides of an inevitable love triangle by employing Bond's former girlfriend, Connie (Virginia Leith) as his own secretary/love interest (yes, the sexual politics of this movie are very 1956). Bond and Connie are clearly meant to be, but he has purposely fallen out of touch with her for the same reason he could not return to test-piloting--the fears, his own and others', that his emotional instability after returning from Korea have rendered him incapable and somehow less of a man than he used to be.

This is some heavy stuff, but Toward the Unknown is a chipper, all-American film with a guaranteed happy ending. Yes, there are quick, vague references to the trauma of Bond's having been physically and mentally tortured, but it is only hinted at and quickly dropped, as the film's interest lies not in really acknowledging and addressing such mushy stuff, but in hurriedly getting past it and up in the air. As an opening title excitedly informs us, it was made with the full cooperation and endorsement of the United States Air Force. That means, of course, that technological advancements in weaponry and a high military budget and buildup are openly, unequivocally advocated and celebrated, with no room for second thoughts or a closer look at the human cost. The Best Years of Our Lives, this movie is not, and Major Bond is able to overcome his deep psychic wounds not through anything sissy like psychotherapy or even really talking about what he's been through with anyone at all, but by manfully getting himself back into the danger zone, ASAP; it is, we can infer from the film, the only acceptable, effective, or truly manly approach. The hamfisted way in which the entire scenario (scripted by Beirne Lay, Jr.) is presented--highlighting the coolness of all those fast, shiny planes and almost trivializing Bond's suffering during the war by turning it into little more than a downer delay in getting to the thrilling aerial maneuvers--make the film's people less characters than illustrative cartoons in a pamphlet designed to boost love for the U.S. military and hatred and mistrust of "The Reds." Indeed, the performances fall into lockstep with the film's bluntly one-dimensional mentality; the actors meet a brick wall in this material, most of which, whether personal or technical, seems designed to be recited rather than acted. The relatively unknown Theil seems particularly lost, simpering her way through her thankless love-object role, and you have seen Holden do way better than this on multiple occasions. It is difficult to believe, as you watch this wooden square stiffly go through the motions, that he is the same passionate, invested film acting legend we know so well from Sunset Boulevard, The Wild Bunch, and Network. 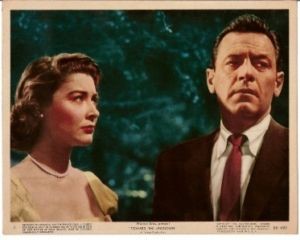 But the film's very one-dimensionality and obviousness also lay bare its potentially sort-of redeeming quality as a time capsule, a glimpse (via singleminded, simplistic movie fantasy) into the unreconstructed, unanswerable fear of monstrous Commie invaders that must have plagued the American consciousness in the time after the Korean War and leading up to the Cuban Missile Crisis and beyond, with everyone craving some reassurance of military might that would protect us from our conniving, brainwashing, inscrutable alien enemies. Thus you can experience here, with no ironic distance, the fetishization of war machinery that Kubrick later had so much sly fun with in the opening credits of Dr. Strangelove. Unlike the one in Strangelove, Toward the Unknown's scene of Air Force planes, serenely interconnecting and undulating together through the sky as they refuel one another, is played with completely sober reverence and admiration, and it is difficult to know whether this mechano-sexuality is more hilarious played straight or with a knowing wink. When the exciting X2 rocket ship that Major Bond has been itching to test out finally goes vertical, firing on two (not just one!) engines and darting up into the stratosphere, an accompanying, insanely giddy-sounding uptick in Paul Baron's score is meant to render the exhilaration overpowering. And at the visual level, the film's blaring, garish color further contributes the leftover-late-night-TV-movie aura of the picture. This is in no way the fault of cinematographer Harold "Hal" Rosson, who knows from color (he shot The Wizard of Oz's Technicolor portion, and Singin' in the Rain); this can be blamed squarely on the short-lived in-house "WarnerColor" process, which, according to The Widescreen Museum, was responsible for "the worst looking prints in the history of motion pictures."

All this cheese is doggedly sincere, rendering Toward the Unknown neither charmingly escapist nor campy in the way that word is usually used now, as more or less synonymous with tongue-in-cheek outrageousness and "fun." It conforms more to an older, stricter definition of camp, meaning a work that makes us laugh or just stare in awe because it has so little awareness of itself, and so much blind faith in its own competence, that it seriously has no idea how aesthetically short it falls and believes in all earnestness that it is hitting every mark, doing everything right, and winning us over with its power and profundity, not transfixing us with its oblivious, hapless reiteration of what was floating around in the social and cultural air of its moment.


As mentioned above, the prints of "WarnerColor" films are known to be subpar, and despite an apparent digital remastering of the film for this DVD release, it looks pretty bad. The color, whatever it was like originally, appears to have decayed to the point where any time a scene fades into another, it creates a grotesque-appearing distortions in the color. There is also flicker and grain throughout, as well as a number of instances of print damage. The visuals are therefore no reason to celebrate the film's release on DVD, but rather the kind of thing you tolerate in exchange for a film's availability on disc. (Toward the Unknown is part of Warner Brothers' from-the-vaults M.O.D. collection.) As a positive, the film is presented anamorphically in its theatrical aspect ratio of 1.85:1.


The Dolby digital monaural soundtrack is passable, though the sound of the film itself leaves something to be desired (a great many scenes appear to have had dialogue dubbed in by the actors in post-production). All the sonic booms and roaring rocket engines do occasionally give the sense of overwhelming that one center speaker from which mono sound emanates, but overall, the sound is not much of a problem.


Finding anything of interest in Toward the Unknown depends on whether you consider the film as art or artifact; it is not a good movie, but it is a fascinating, revealing one. It is utterly transparent Cold War propaganda, with delighted displays of military aircraft in action, an eager, anxious glimpse forward to the Space Race, and an interest in human-scale affairs so desultory as to make the machines and the ability to build and fly them seem much more important than the complications and consequences of militarism and war waged, as it was in Korea, in the dubious name of "containment" (it is not coincidental, politically speaking, that director Mervyn LeRoy would later work on John Wayne's notoriously pro-Vietnam War The Green Berets). Even for those who do have a strong enough interest in American cultural history to overlook the film's absence of craft or insight and appreciate its unselfconsciously naked manifestation of the anxieties and priorities of Cold War paranoia, Renting It will offer more than enough familiarity.